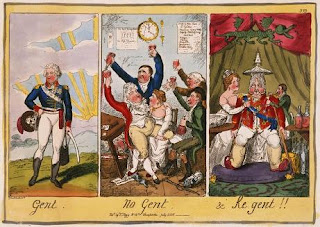 Happy birthday to the Regency! Just a day late as the Regency Act that gave its name to “our” period was passed on February 5, 1811.

I suppose no one at the time knew that the term “Regency” would come to represent not only a period in British history but would also give rise to a whole subgenre of romance. Or that it would become so synonymous with elegance and luxury. I wonder how many people realize how the term first came about as they patronize hotels, dry cleaners, florists, etc…, with the name? Probably not many. Doesn’t anyone understand how difficult this makes it for me to google for useful information on the Regency???

Anyhow, I wasn’t in much of a celebratory mood yesterday. The cold I’ve been fighting degenerated into some sort of wretched flu-like thing. I’m better now but I spent most of yesterday in bed. I didn’t even watch the latest film I got from Netflix (SHARPE’S WATERLOO) as I wasn’t feeling up to the carnage. Instead I immersed myself in comfort TV: What Not To Wear, How Do I Look? and an old Star Trek episode.

The only Regency thing I did was the Jane Austen Movie Club–but it is such fun (thanks again to Cara for hostessing) that it may be celebration enough.

Anyway, happy belated birthday to the Regency and thank you all for sharing your obsession with us!

Happy Birthday to the Regency!!

Elena, I adored that top picture. Where did you find it? Very cute!

Glad you enjoyed the pic, Keira! I just googled Cruikshank, George and Regency–and didn’t get too many hotel hits!

I hope it was one of the good Star Trek episodes, Elena! 🙂

It was Where No Man Has Gone Before (the one in which people with ESP develop godlike powers). Not bad but I was really more in the mood for tribbles. 🙂

What a great anniversary to know, Elena! Sadly, yesterday I did nothing Regency-ish, just watched reruns of “Gossip Girl”. 🙂 But maybe that says something about how cliqueish backbiting doesn’t change in 200 years. Or something like that.

Very cool trivia! I’m going to have to mark that one on the calendar and plan something tres Regency-ish for next year.

Hope you are feeling better, Elena..

Ack. I’ve had the copy edits from h*((
I’ve been working non-stop all week…so have been a little quieter than usual.

Ditto on the marking the calendar and doing something Regency – ish, whatever that may be. If things at work don’t calm down I may smite one of my nasty customers with my reticule (after I fill it with rocks!)

Loved the cartoon!! I don’t think they had any idea what that one rather political act would wrought!

That joke about turning up dry cleaners and such when you Google “Regency” is so true! But it’s not just that…I remember a few years ago, I was trying to find something on some aspect of the Regency (I forget what), and I turned up this long list of sites–all on the French Regency. (About a hundred years too early!)

I hope you feel better soon!

I missed the celebration. I will have to celebrate tonight with a Regency movie or novel.