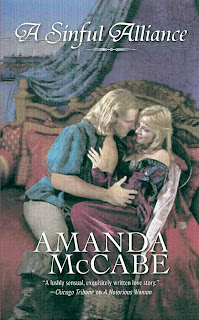 So, I got the cover for my April ’08 book, A Sinful Alliance, a couple of weeks ago. I cried for two hours, and then I couldn’t get the strains of Dancing Queen out of my head for another two…

Okay, granted this a bad scan done on the sly at work, since my printer is having a cranky week. But trust me, if there was a Razzie for romance novel covers I think this would be a contender!

For a bit of context, here is the back cover copy (if you read A Notorious Woman, you may remember Nicolai as Marc’s friend, the actor/spy):

She was exceptionally beautiful, and entirely deadly!
The baseborn daughter of a courtesan and a lord, Marguerite was forced to fend for herself in the dangerous world of the French nobility–as the king’s most feared spy.

Sent to the court of King Henry in England, Marguerite found polite words and flattery concealed dark passions. Her only friend was her old enemy, the sensually tempting Nicolai Ostrovsky. And their sinful alliance seemed set to turn her from old loyalties to new desires!

I did finally realize what the cover reminds me of, though!

When I was hoping for something sorta in the style of this:

Not that Cate Blanchett and Joseph Fiennes look like these particular characters. I just like the romantic, Renaissance-y feel of it.

Or this, if we cut out Scarlett Johansen, would work (the clothes are right, anyway):

This would work, too, if they wanted to sex things up a bit:

In my mind, Nicolai looks something like Heath Ledger (RIP) in Casanova:

And Marguerite looks like Abbie Cornish in Elizabeth: The Golden Age:

No matter what, they don’t look at all like an anatomically incorrect Fabio wannabe in large boots and his Jazzercise instructor girlfriend! I’m not at all sure they would float down the Thames on a bed, either. And they definitely would not open a roller disco with the help of the Muses!

So, tell me the truth now. I can take it. I’m among friends here. What do you think of my cover? And what are some Bad Covers of the Past you remember (Suzanne Brockmann’s infamous Get Lucky maybe? Or our own Janet’s Forbidden Shores?)
Keep up with all our news and upcoming books, the good, the bad, and the ugly, by signing up for our newsletter at riskies@yahoo.com.
Posted in Risky Regencies | Tagged Uncategorized | 16 Replies
0 0 votes
Article Rating
Subscribe
Login

Oh Amanda, I feel for you, but the icky cover won’t stop me from buying it! Although you might make the Smart Bitches Hall of Fame of bad covers.

“Although you might make the Smart Bitches Hall of Fame of bad covers.”

LOL! I would definitely love to hear what the SBs would have to say about it. 🙂

I was really surprised to get this one, since the HH covers have been quite nice lately. It doesn’t suit the story at all. The excuse I was given was that readers don’t always like “unusual” settings, and have to be lured in with a Very Traditional Historical Romance cover. Why a cover can’t be traditional with attractive people, I dunno.

Thank you for pledging to buy the book anyway, Elizabeth! We need to start a Look Beyond The Cheesy Cover campaign or something. 🙂

It is icky. Eew. What were they thinking? I hope it sells bigtime despite it.
I feel your pain.

Well. As I said to you before, I do not think this is a bad cover.

I think the two models are attractive people in a sensuous position. The colors are rich and appealing.

Don’t put it in our heads that this is a bad cover! It is not your favorite cover, but I’m betting it will appeal to lots of readers who will pick it up, read the back cover copy, and run to the cash register with it!

My first thought, before I realized it was your cover, was that it was a book from the 1970s…

Of course, some of that may have been the bad scan, which makes it look like it’s been in the sun for a few years. 🙂

On the positive side, I don’t think it’s an all-time bad cover…just, by current HH standards, it’s definitely a disappointment. (So many of their recent covers have been gorgeous!)

But look at it this way: your name is big — so all smart readers will buy it because it was written by you.

.”just, by current HH standards, it’s definitely a disappointment. (So many of their recent covers have been gorgeous!)”

I think maybe this was why I was so taken aback when I opened the file. They’ve done some great stuff lately. This story is pretty history-intense (I did a ton of research!) and we had talked about a kind of “historical fiction” type thing, like a Tudor-era painting. Not this 1970s stuff that is so unlike anything else they’ve come out with recently!

Lois, this actually makes me feel much better! 🙂

Yes, it’s rather icky, and anachronistic to the nth degree, but as Lois says, I’ve seen a LOT worse.

I’m sure the readers won’t mind, but I do feel for you.

I agree that it does have a bit of a ’70s vibe to it, but echoing Lois, I’ve also definitely seen much worse. 🙂

I must concur, it won’t stop me from buying the book at all! I love your stories! And it isn’t the absolute worst cover I have ever seen, not by a long shot.

Just think how great you will feel when this book sells MORE than the others with their stylish covers. That means you are just too good a writer to let a less than stellar cover stop you!

**No matter what, they don’t look at all like an anatomically incorrect Fabio wannabe in large boots and his Jazzercise instructor girlfriend!**

That shoulda come with a spew alert.
I’m glad to see this cover has not dulled your razor-sharp sensibilities. 🙂

It’s not nearly as bad as some. But I am dismayed that someone in the art department at HH interpreted “historical-fiction feel” as the 1970’s. Or maybe I’m just sensitive because I’ve got a birthday coming up. (Don’t we Diane?)

“Feel the beat of the tambourine, woo-oo-oo-oo.” Aaaah!

Or maybe I’m just sensitive because I’ve got a birthday coming up. (Don’t we Diane?)

Indeed we do, janegeorge! Although I REFUSE to say which birthday I’m having.

I’d buy the book even if the cover was made of TP – really!

And, I don’t know if this would make you feel any better, Cate Blanchett looks like she has a retainer – or maybe that’s just the glare on my screen.

“I’d buy the book even if the cover was made of TP – really!”

Okay, I do officially feel better! I am hoping the PTB are right, and this will somehow draw in people who might be reluctant to try something different (ugh, makes it sound like my book is brocoli!) At least I know some Riskies will pick it up!

LOL on the retainer, Santa! I will say this for the girl on the cover, she does appear to have straight teeth…

Yeah, I don’t think you have to worry, I imagine most people out there do pick up a book regardless of the cover. Right? Hopefully? 🙂 LOL

I’ve never bought a book based on a cover — unless you count the idea that I see a man or woman dressed in regency-wear and I didn’t know about it before. That’ll catch my attention, but it still all comes down to what it says on the back cover.