As many of you know, Bertram St James (one of the most noted Tulips of Regency society) mysteriously traveled in time, arriving a few years ago in our world of McDonalds and baggy jeans. He likes to turn up here at Risky Regencies on occasion to share his observations of modern life…but he has not been around recently.

In fact, I have not seen him in ages — although he promised he would share his thoughts on Valentine’s Day. But as far as I can tell, he, his valet, and his massive wardrobe have gone off somewhere…but where?

Breaking news: I still do not know precisely where Bertie the Beau is, but I did receive a telephone call from him. The transcript, which interrupts your regularly schedule Valentine’s Week Post, is as follows: 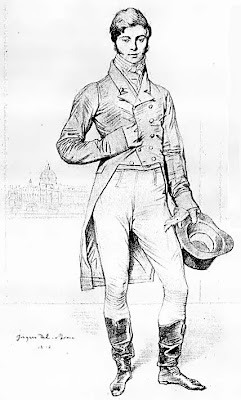 Bertie: Why do they say “dial nine for an outside line,” when one only needs to dial “nine” when one is inside? Or does “inside” pertain to the telephonic callee? But how am I to know whether the individual for whom I am calling is out of doors or in?

Cara: Bertie, is that you?

Bertie: Who else possesses such mellifluous tones?

Cara: Um, yes, of course. How are you, Bertie? I haven’t seen you in ages.

Bertie: I am beautiful as always — need you ask? Oh, and is a “pants press” a new model of weight training machine?

Cara: Bertie, are you in a hotel?

Bertie: I cannot tell you where I am — who can say whether an insect is eavesdropping on the wire?

Cara: Wait — how are you paying for all this?

Bertie: Oh, never worry about money. Dreadful thing. Have you been watching the Lost Show on your TeleVision Box? Did you know they have the Lost Show at the Beverly Hilton?

Bertie: Oh, dash! I mentioned the name of the place, didn’t I? Now I’ll have to move again. Do you know if the Bel Age has huge-screen TeleVision Devices?

Cara: Why are you in hiding anyway???

Bertie: Why else, but relations? You recall that my great-aunt Lavinia Sophia Eugenia Kumquat sent notice to the periodical known as In Touch, reporting my nonexistent engagement to Miss Keira Knightley? 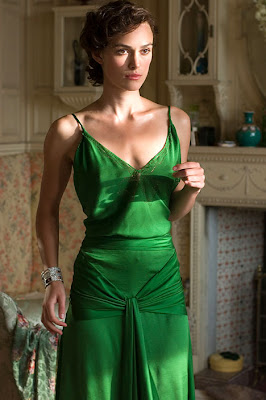 Cara: Yes…but wasn’t that a while ago?

Bertie: Aunts have very long memories. Quite like elephants. Come to think of it, my aunts resemble elephants in more ways than just that. If you could see–

Cara: Elephants don’t matter! Are you hiding from your Aunt Lavinia Soph–er, whatever her name is?

Bertie: Oh, she was bad enough. I still deny ever meeting the fair Miss Knightley! (I can deny it if there are not photographical pictures of us on the spiderweb, can I not?) And I certainly never became engaged to anyone. Though I admit that, in her green dress, she is the loveliest “Valentine” any gentleman could want! (Not that I do.)

Cara: So you’re not hiding from your aunt?

Bertie: No indeed — one aunt was not enough to cow me. But two are.

Cara: You now have two aunts in this century?

Bertie: Isn’t it dreadful? My Aunt Gorgon — that is, Aunt Gordon — has somehow joined my Aunt Lavinia Stuffy Aged Kumquat. Aunt Gorgon always pokes me when I do not sit up straight — but how can one be truly elegant without a subtle languor? And she’s not the worst of it! No, she brought along my Uncle Bucephalas Augustus Hund, who always wants me to tramp through nature — nature! the very idea! — and shoot at deer or birds or some other dirty creature with one of those shooting things. And as he’s quite a bit stronger than I am, I think it best just to go to ground and hope he cannot smoke me out.

Oh, dear, that sounds like his knock now! Oh, good, my man has indicated I can escape via the balcony. Adieu! Happy Valentine’s Day!

So, there you have it. Poor Bertie! (And I do hope he isn’t charging it all to my credit card…)

Cara
who wonders if Bertie has yet discovered Godiva chocolates

OOOoooooh!! [squeal] ((((Bertie)))) my beau! How divine of you to show up just in time for Valentine’s Day. [eyes rapidly blinking owlishly] You’re quite the handsomest Corinthian, I declare. I vow your aunts and uncle just do not know how to appreciate your Tulip-worthiness, [sultry voice] but I do. Come to me.

Bertie, how very nice it is to see you here again! Have you tried the Chateau Marmont? Though that might not be the best place to hide out from “In Touch”…

Ah well, if he has your Visa, sure hope he doesn’t discover Best Buy. . . they got some mighty big big screens there that he might like. . . while eatting chocolate in front of them, while watching Keira. 😉

Ah, my other adored Keira! So delightful to see you here. I will send you one of those private messaging text things, and if you do not change your mind regarding your charming invitation, I may see you soon! (You do have a TeleVision Viewer, do you not?)

Have you tried the Chateau Marmont?

Thank you for the recommendation, Mlle McCabe! Is that a claret or a burgundy? And is it robust? (I do hope not. One with a delicate constitution like mine must always be careful to drink only the lightest wines…)

And many thanks to Mlle Lois, for her splendid information about “Best Buy”! As soon as I can convince one of those hackney things to stop for me, I’ll be on my way there!

Bertie asked, “You do have a TeleVision Viewer, do you not?”

Bertie, you are QUITE the man about town, aren’t you? It is always nice to hear from you. It is obvious your family simply does NOT understand the standards to which a consummate beau like yourself is held.

Trust me, our Keira understands you and will take excellent care of you. I suggest you travel to her country house for an extended visit. I am SURE she would be in alt to have you!

By the way, Bertie, I phoned my credit card company, but they say only one night at the Beverly Hilton was charged to my Visa — and that was a month ago. So HOW have you been paying for this???

Cara (who has a one-track mind)

Keira! Your reputation is quite lost, I fear. And Bertie’s too, if you ruffle his furbishings.

Hey, Bertie!
If things don’t work out with our Keira (who I believe is really your Keira)you may come stay with us. We have a spare bedroom with a single bed and a trundle for your valet. Of course, you have to come to the east coast. We can take you to see Mt. Vernon, the country house of our first president–but you must promise not to laugh. It is nothing like Chatsworth.

So HOW have you been paying for this???

I do think all this talk about filthy lucre is beneath us…or, at least, beneath me. But if you must know, the first night I stayed at the Beverly Hilton, some sort of agent person was so taken with my manly beauty that she convinced me to pose for photographic artists while wearing clothes that have been “designed” (or something like that.)

Now, on to higher topics!

Thank you, Mme Gaston, for your kind invitation! If my dread relations discover my new hiding place with the fair Keira, I will accept with gratitude!

We can take you to see Mt. Vernon, the country house of our first president

I had no idea General Washington lived on a mountaintop! (Many are the flaws of an Eton education…)

By the way, I did manage to view the recent adaptation of Northfangled Abbey (or whatever the title is.) And I must say, I am pleased to see a handsome, well-dressed hero for once! (That Macfadyen chap was far too slovenly.)

Bertie, darling! You still didn’t answer Cara about who is footing the bill at the Beverly! Have you picked up a paramour – or are you the paramour? Not that there’s anything wrong with a kept man. I wouldn’t mind one of my own. I think my DH would be okay with that.

And isn’t it Tuesday in RR land? I thought we were going to wax poetic about Mr. Darcy.

And isn’t it Tuesday in RR land? I thought we were going to wax poetic about Mr. Darcy.

Sorry, Santa! Because we’ve already discussed the Firth/Ehle P&P, we’ve gone back to our usual JA Movie Club schedule, which means only on the first Tuesday of the month.

But by all means, if you want to say nice things about Darcy, feel free! 🙂

Or if you’d rather, you can comment on the discussion page:

Do I understand you correctly, that you are working as a model? Is not working beneath you? Though admittedly, if all you are doing is being paid to wear clothes while others stand around admiringly, that is pretty much what you would do anyway…

One other question: does the Beverly Hilton allow guests to keep hedgehogs in their rooms? If not, where is your valet staying?

I’m so delighted to hear from you and to know you’ve found a modern calling for which you are so eminently suited. Please visit again soon–we promise to protect you from any gorgons!

My reputation once lost is lost forever.

Beau, I wouldn’t object to your, er, creative career. It would be nice to have a houseguest who can provide for his upkeep. Our house is large and with visual inducement, I hope you’ll hop to it and visit us here in the beautiful Pacific Northwest.

And Bertie, before you get your hopes to high, Mme Gaston and I haven’t never competed for your attentions.