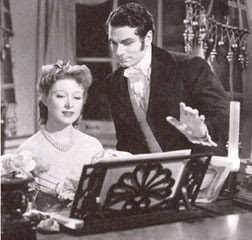 First, a NOTICE: I have now twice mis-stated the date on which Risky Regencies’ JANE AUSTEN MOVIE CLUB will discuss the Olivier/Garson Pride & Prejudice! (Careless. Sorry.)

(For those of you joining us for the first time: the Jane Austen Movie Club meets here the first Tuesday of every month, and sometimes on other Tuesdays, to discuss various Jane Austen TV and movie adaptations. Please join us!)

Second, a CLARIFICATION: Those of you who get our brilliant newsletter might have received the implication that our discussion of this same Olivier/Garson Pride & Prejudice will follow the airing of it on PBS.

Sadly, this is not the case. They’re not airing it. (Though if you ask me, they should just stop showing all that other silly stuff and become the All Jane Austen All the Time network…) So if you’d like to participate in our discussion, you can either do it from memory, or track down a copy of the DVD or tape within the next two weeks… Or just stop in and say hi! 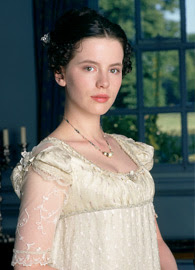 Third, a QUESTION: The BBC Emma (with Kate Beckinsale) airs March 23. I had originally not scheduled it for discussion on the following Tuesday (March 25) because if we run through too many Austen adaptations too quickly, we’ll run out of things to discussion in the Club and the Club will have to end sooner.

Then again, we could always talk about adaptations of the Scarlet Pimpernel, Sharpe, Hornblower, etc… And the advantage of discussing it on March 25 is that it will be fresh in everyone’s minds…that is, if they’ll be watching the showing on PBS.

So: what’s your vote? Beckinsale Emma on March 25, or not?

And now, fourth, so that this post won’t be entirely full of information and other tedious stuff, here is part of an actual 1804 NOTICE OF HORSES FOR SALE:

TO BE SOLD AT LEWES, ON THE FIRST OF AUGUST

Being the vacant Day between BRIGHTON and LEWES races.

LOT 1: THE Stallion, Waxy, by Pot8o’s, out of Maria, by Herod, her dam, Lisette, by Snap, out of Miss Windsor. He is sire of Mr. Wilson’s colt, that was second for the Derby Stakes.

LOT 2: Kezia, by Satellite, out of Waxy and Worthy’s dam, &c. &c. with a colt at her foot by Waxy, and covered by him again.

Cara
Author of MY LADY GAMESTER, in which the horses had slightly less strange names than Pot8os)

Cara, the Laurence Olivier P&P was on TCM not too long ago and I did watch it. The first time I tried to watch it I could not bear the Victorian costumes and the ladies’ mincing, affected way of walking, but this time I stuck it out.

So I’ll be ready to TALK.

Watching the Colin Firth P&P I am reminded how close to perfection this version came. Sigh.

Cara, I *love* the idea of an All Jane Austen All The Time network!

As for whether we discuss the Beckinsale S&S I’m mildly on the side of discussing it next month. It’s been a long time since I saw it and this would be a good chance to refresh. But no big deal as long as we get to it.

I like the idea of discussing other period films. Also think it might be fun to discuss modern reinterpretations of Austen. What does everyone else think?

“I like the idea of discussing other period films. Also think it might be fun to discuss modern reinterpretations of Austen. What does everyone else think?”

I would love to do this! There’s some great stuff out there, like “Bride and Prejudice”

“The first time I tried to watch it I could not bear the Victorian costumes and the ladies’ mincing, affected way of walking, but this time I stuck it out.”

I also watched it on TV recently! The first time I could force myself to sit all through it. 🙂

I would love a chance to discuss other historical adaptations like, um, I don’t know, North and South? Cranford and A Room with a View which are being presented by Masterpiece Classics. I haven’t seen the Olivier/Garson P&P in years, but it would give me an excuse to watch it again. How about discussing biopics? Like the Caroline Lamb with Sarah Miles (is that on DVD?) or Byron with Jonny Lee Miller? That Hamilton Woman?

I’m up for discussing any of this at any time. I just bought North and South but I haven’t watched it yet.

For those of you whose cable provider has On Demand, I think the Olivier/Garson P&P is on Classics.

As for other movies, sure! 🙂 I pretty much only have Jane adaptations, but sure wouldn’t mind starting a to be seen list from what all you guys say about other movies. LOL 🙂

And with Emma, I wouldn’t mind doing that discussion after it’s shown on tv – that way if anyone who doesn’t have it or it’s been a while can see it while it’s on. 🙂

Though I’m also delighted to hear suggestions for the Club!

Emma, by all means.

So, Diane, Lois, and Elena are voting for Emma on March 25…so at the moment, the yeses are definitely winning!

But by all means, keep the votes coming — both for or against doing Emma then, and with ideas for other Movie Club things to watch!

Cara
(who is currently reading a Heyer to Todd, who is under the weather…)

I’m going to be missing out the finale of P&P, because the Oscars are on.

Other period movies, modern movies on period themes, and modern remakes are all great ideas. How about “Jane Austen Book Club” or “Amazing Grace” or “Clueless”?

OMG, Diane, how can you have N&S and not watch it. Get thee to your DVD player asap. It’s guaranteed that you’ll love RA in Mr. Thornton.

Eek, Todd. This is the second serious illness in a few short weeks. And Cara, I hope you’re reading “Devil’s Cub” to him to complete the modern day mimicing. 🙂

Eek, Todd. This is the second serious illness in a few short weeks. And Cara, I hope you’re reading “Devil’s Cub” to him to complete the modern day mimicing. 🙂

It’s conferences together with lack of sleep that do me in. I am determined that I shall get plenty of sleep on my next trip (which is unfortunately in less than two weeks!).