I know last week I said I would continue with my “romantic and not-so-romantic couples of the Regency” thread, but I discovered that today is the anniversary of the death of John Keats, in 1821. So I decided to talk about that instead. Stay tuned next week for more romantic high-jinks! (Or maybe some hot guys, if I can find one Megan missed…)

Of all the romantic poets, Keats is my favorite based solely on the poetry. His life is not as wild as Shelley and Byron (for one thing he lived for such a short time, to to the age of 26, narrowly beating Shelley for “youngest death”), but his poetry has a beauty and sophistication, a sensual imagery, that is hard to beat.

He was born in Moorgate, London in 1795, the son of a hostler (his father’s pub still stands, and is now called “Keats the Grove”). But his childhood had an early end with the death of his father seven years later. Keats grew up with his mother, grandmother, and 3 siblings, until his mother died of tuberculosis in 1810. John soon found himself entrusted with the care of his younger brother, Tom, who also suffered from tuberculosis. He managed to travel in Scotland and Ireland, where he composed his epic poem Endymion. But this poem, as so many after them, was the focus of much abuse from critics. In 1818, Tom died and John found he, too, suffered from the disease. He then moved to Hampstead, where he lived next door to Fanny Brawne, his one love. But the relationship was cut short when Keats was forced to leave damp London in 1820 and go to Italy. (Fanny’s comment in her diary in his departure–“Mr. Keats has left Hampstead.” Scandalous!!!). 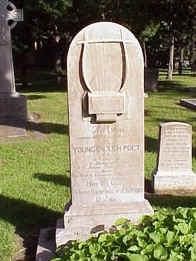 Italy didn’t help. Keats died in 1821, and was buried in the Protestant cemetery in Rome. He asked that his tombstone read only “Here lies one whose name was writ in water,” but his friends took the liberty of adding “This grave contains all that was mortal, of a YOUNG ENGLISH POET, who on his deathbed, in the bitterness of his heart, at the malicious power of his enemies, desired these words to be engraven on his tomb stone” (one in the eye for those nasty reviewers!).

Shelley blamed Keats’ death on an article in the Quarterly Review; Byron wrote a poem in his honor using the words “snuffed out by an article.” Wallace Stevens describes him as the “Secretary for Porcelain” in his poem Extracts from Addresses to the Academy of Fine Ideas:

“Let the Secretary for Porcelain observe
That evil made magic, as in catastrophe,
If neatly glazed, becomes the same as fruit
Of an emperor, the egg-plant of a prince.
The good is evil’s last invention.”
Also, on my newest TV obsession, the otherwise ridiculously and wonderfully idiotic Gossip Girl, the character Dan seems to see Keats as his poetic hero, and references him now and then. He’s mentioned in The Smith’s song “Cemetery Gates.” And according to IMDB, there’s a film in production about the romance of Keats and Brawne titled Bright Star, starring Abbie Cornish and Ben Whishaw (from Perfume).

Some of Keats’s own poems include To a lady seen for a few moments at Vauxhall, To Autumn, Ode on Melancholy, Ode to Fanny, On seeing the Elgin Marbles for the first time, Ode to a Nightingale, and Give me Wine, Women, and Snuff. Here is the last stanza of one of my favorites, Ode on a Grecian Urn:

O Attic shape! Fair attitude! with brede
Of Marble men and maidens overwrought,
With forest branches and the trodden weed;
Thou, silent form, dost tease us out of thought
As doth eternity: Cold Pastoral!
When old age shall this generation waste,
Thou shalt remain, in the midst of other woe
Than ours, a friend to man, to whom thou say’st,
“Beauty is truth, truth beauty,”–that is all
Ye know on earth, and all ye need to know.”
Who are some of your favorite poets? Do you watch Gossip Girl (or any other craptastic TV??). And who do you predict to win (or show up in a fab gown) at the Oscars tomorrow?

Speaking of tomorrow, be sure and join us as Deb Marlowe and I get together for an interview about our March UK releases! Comment for copies. And sign up for our monthly newsletter at riskies@yahoo.com, with “newsletter” in the subject line, so you don’t miss any of our events, special or not.

Well, I have seen none of the Oscar nominated movies, so haven’t a clue who will win (nor does it actually matter much. LOL) But I sure hope Jon Stewart wins as host! 🙂

Hmm, poets. . . I’m not a huge poem fan, but I rather like collections. What I mean by that is I have two small books with love/related poems, one with Christmas. . . and I have other types, but I can’t think of what they are because those three that I listed just happen to be the ones right near me. 😉 Oh, and of course wherever my Complete Works of Shakespeare is, it’s truly complete with the sonnets. 😉

I may boycott the Academy Awards in protest. I cannot believe they so thoroughly ignored 300, one of the most creative movies of the year, if not decade. And, of coures, I think Gerard Butler should have been nominated for best actor. I’d like to see Brad Pitt try to pull off a role like Leonidas as well as a role like The Phantom of the Opera. Other actors who deserved a nomination were Christian Bale in 3:10 to Yuma and the actor who played his son, Logan Lerman.

But what this has to do with poetry, I have no idea!

I’ve only seen 2 of the nominated pictures, and I doubt either of them will win! (For the record, Juno and Atonement. Atonement would be a good pick, Juno not so much, though it was fine in its way. And why was Diving Bell and the Butterfly not there???)

Oh, and for Picture I guess “No Country for Old Men”–possibly “There Will be Blood”. What a depressing line-up!!

Keats is one of my favorites, behind my dear Byron, of course. I happen to love Shakespeare’s sonnets as well. They are these perfect little thing. Poe has written some terrific poetry as well. Kahlil Gibran has written some of the most wonderful and thought provoking poetry. I have a dear composer friend who composed a set of three songs based on Emily Dickinson’s poetry for me. He allowed me to sing the debut performance of the set, which was a huge honor.

I actually haven’t seen any of the films nominated for Best Film. I have to agree with you, O Divine One. 300 was a fantastic film and frankly Brad Pitt is not worthy enough to fasten Gerrard Butler’s sandals. And I agree with you on Christian Bale. I have not been particularly enamored of him as an actor until 3:10 to Yuma. Terrific performance.

Diane: You can.not boycott the Oscars. You just can.not. No matter the insults dealt to your god and idol, you can.not.

Amanda, Keats is my favourite poet of all time. Thank you for such a lovely tribute to him. I always cry when I read “When I have fears that I might cease to be…”