I beg your indulgence today. I’m going to sound a little bit grouchy, so please forgive me, and assume it’s all because

(2) I spent so long caring for my sick husband (days! maybe even a week!) that my mind has irretrievably gone; 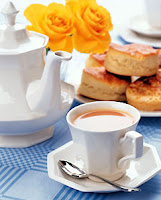 (3) I’ve secretly been a grump all along, and have finally lost my ever-so-thin veneer of niceness due to normal wear and tear;

(4) I’m suffering from severe lack of tea; or

(5) I’m currently being forced (by a secret government agency) to read a book lacking in either proper grammar or any respect for history, and am the worse for it.

My post today is, you see, on how to be sharp. 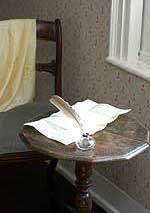 SHARP WRITERS never write any of the following: alot, alright, “he drug her down the stairs” (believe it or not, I’ve seen this nonexistent verb tense several times recently, in published books!), Jane Austin, Lizzie Bennett (Austen spells it “Lizzy Bennet”), or “here here!”

SHARP WRITERS find out what words actually mean before using them. (Yes, words like literally, embark, pigtails, castle, and unique do have actual meaning.)

SHARP JANE AUSTEN MOVIE FANS may enjoy learning that the following actresses, all of whom have appeared TV or film versions of Austen’s works or of other Regency-interest works, were all just nominated for Olivier Awards (the most respected award for London Theatre): 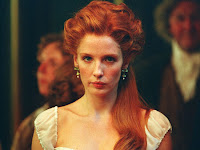 Kelly Reilly, who played Miss Bingley in the 2005 PRIDE AND PREJUDICE, was nominated for playing Desdemona in OTHELLO at the Donmar Warehouse.

Anne-Marie Duff, who played Louisa in the TV miniseries ARISTOCRATS (1999), was nominated for playing Joan in SAINT JOAN at the National Theatre.

Penelope Wilton, who played Mrs. Gardiner in the 2005 PRIDE AND PREJUDICE, was nominated for playing Ella in JOHN GABRIEL BORKMAN at the Donmar Warehouse.

Fiona Shaw, who played Mrs. Croft in the 1995 PERSUASION, was nominated for playing Winnie in HAPPY DAYS at the National Theatre.

Speaking of Austen adaptations, please join us next Tuesday (March 4) to discuss the Olivier/Garson version of PRIDE & PREJUDICE, and March 24 to discuss the Kate Beckinsale EMMA!

There you have it!

Question for the day: What would you like to add to my “Sharp Writers” list? (All answers welcome!)

Elena Greene grew up reading anything she could lay her hands on, including her mother's Georgette Heyer novels. She also enjoyed writing but decided to pursue a more practical career in software engineering. Fate intervened when she was sent on a three year international assignment to England, where she was inspired to start writing romances set in the Regency. Her books have won the National Readers' Choice Award, the Desert Rose Golden Quill and the Colorado Romance Writers' Award of Excellence. Her Super Regency, LADY DEARING'S MASQUERADE, won RT Book Club's award for Best Regency Romance of 2005 and made the Kindle Top 100 list in 2011. When not writing, Elena enjoys swimming, cooking, meditation, playing the piano, volunteer work and craft projects. She lives in upstate New York with her two daughters and more yarn, wire and beads than she would like to admit.
View all posts by Elena Greene →
This entry was posted in Uncategorized and tagged Austen, movies. Bookmark the permalink.

26 Responses to How To Be Sharp