Our Regency heroes were all dressed as girls for the first few years of their lives. Sad but true, and somehow they grew up normal; the upside of it was that they then enjoyed the formal ceremony of being breeched–that is, allowed to wear pants. And other than the cross-dressing, it wasn’t that bad a time to be a child, if you survived, and, of course, had the additional luck of being born into a family with money and education. 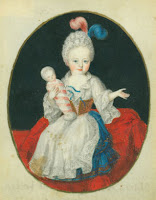 Children were no longer seen as adults in miniature or full of original sin that needed to be flogged out of them. Childhood was becoming recognized as a stage in life, much as the 1950s spawned the cult of the teenager, thanks to Rousseau’s Emile, a novel that explored the ideal upbringing of a child (ironically, Rousseau sent his own children to be raised in an institution, hoping they’d have a better chance in life there than as the illegitimate offspring of an impoverished writer). Wordsworth and Blake wrote about childhood as a state of mystical innocence.

Children now had their own styles of clothing, such as the skeleton suit for little boys and the late eighteenth-century styles for girls’ clothes–high waisted, simple cotton gowns–later became the fashion for adults. Books, games, and puzzles were produced for children, and not all the books were improving texts.

But even in those relatively enlightened times, and in affluent families, the infant mortality rate was appallingly high. It makes you wonder what the relationships between children and parents were like–did parents love their children without reservation, knowing they might have only a short time together? Or did parents repress their natural feelings to protect themselves from the grief to come? 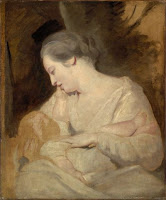 In a biography of Mary Wollstonecraft I read (sorry, can’t remember which one), there was a truly heartbreaking excerpt from a letter Mary wrote after losing a child–but the thing that struck me as odd was that she referred to the baby as it. It could be a linguistic oddity–like the French word bebe not entering the language until the late nineteenth-century. But words are important, as we know. Does this reflect an attitude of the past that is quite alien to us now? Is this how the Regency produced Victorians?

And how do you feel about the portrayal of children in romances? Quoting myself, number seven in the top ten things a heroine would never say in a Regency romance (from The Rules of Gentility):

I don’t care if that adorable lisping child is the apple of the hero’s eye. If she doesn’t shut up I’ll slap her.

I believe that the word “baby” in German in neuter; I’m pretty sure the Old English word for child was neuter; and the word for baby is neuter in several romance languages. I suspect all this led to the old habit of calling babies “it”…

Well, that and the fact that boy babies and girl babies (once diapered) look the same. 🙂

That is pretty fascinating–thanks for the post today! And I generally enjoy reading about kids in the books I read, but sometimes they’re made to be a lot more mature than they might be in reality!

One mark of infant mortality I’ve noticed in family trees from our era is recycling a dead child’s name for a sibling. E.g. the Duke of Wellington was actually the second Arthur born to his parents–the first one died of smallpox as a young child, and they just used the name again for the next boy to be born.

In a way, I can understand it. It wasn’t like parents were poring over baby name books. Most children were named after relatives, the current king or queen, etc., so if your family had a tradition of a James in every generation, of if you had a rich Uncle Richard who might look kindly on a namesake, you’d be inclined to use the name again. It might even be comforting to feel like your family and its traditions carried on even after losing a child. But it’s still difficult for me to imagine getting used to calling a new child by the same name as its dead sibling, especially if the first child was well out of infancy when he died, as was the case with Wellington’s brother–I think he was 5 or 6.

Well, I like children in books and have done some myself, especially the four foundlings in LADY DEARING’S MASQUERADE. I try not to be too cutesy with the children; instead I model them on traits I’ve seen in my own children and their friends. Still not every reader will believe my depictions. People who aren’t into kids have a hard time believing they’re not all screaming nuisances all the time. These are the people who sometimes give us dirty looks as we board a plane with them but have been known to compliment us afterwards. Maybe they don’t understand that kids can behave on planes if 1) they are bookworms and 2) they’ve been threatened with a slow and painful death if they kick the seat in front of them!

And there are people who think children kill romance. I don’t think so but for me, some of the traditional Regencies went overboard with cutesy kids actually setting up the romantic couple. I don’t mind if children initially bring the h/h together (in LDM the heroine “adopted” foundlings and the hero was a Governor of the Foundling Hospital) but after that I’d like them to be able to figure out the romance part on their own!

Elena, I liked the foundling kid who picked his nose at the wedding in Lady Dearing!

I enjoyed the post. It’s interesting to see the development of childhood and how much it changed in a relatively short amount of time.

I’m afraid that I’ve been known to refer to babies as “it” myself. 🙂 Though admittedly, none of them were my baby.

Interesting post, Janet. Children can be a difficult issue in romances (after all they really can be scene-stealers. I’ve tended to avoid them, but my Sarah Mallory novel MORE THAN A GOVERNESS, which is published by Harlequin next month, has FOUR children in it! I debated long and hard about whether to have so many, but they are really integral to the plot.

As for families using the same name, with such high mortality rates it was common sense for parents to give more than one child the same name, if they wanted that name to carry on. The chances were that at least one of the children would die. Harsh, sad, but true.

Elena, I liked the foundling kid who picked his nose at the wedding in Lady Dearing!

Thanks, Janet! I did think it kept the scene from getting too hearts-and-flowersy…

Melinda, agree that children can be scene-stealers. But that can be true of any secondary characters. One good way to tame them is to promise them their own stories later on. In the case of children though, it can mean having to write early Victorian, which I’ll admit I find a bit daunting.

Elena, in this case I am happy to leave my children in perpetual youth, like Peter Pan! Like you I am reluctant to move into the Victorianperiod. I would much rather go back to the roistering Gerogian era. I do agree with you that any characters can be scene stealers – on more than one occasion I have had to bribe some of mine with the promise of a book of their own, too!

I do allow adolescents and pre-adolescents into my books — in The Slightest Provocation via flashback and in my forthcoming The Edge of Impropriety as a full-fledged character, a girl of almost thirteen named Sydney.

Sydney’s the site of certain of my cherished fantasies — she’s been brought up and beautifully, classically, educated by a lovely male guardian (think Carson Drew — only Regency, and with a personality).

And she’s a narrative risk and genre experiment: Could I make the book as sexy as I wanted — would the grownups have the freedom to be as hot as they wanted, late at night anyway — with Sydney lurking about the pages? Can any of us parents be as sexy as we might still want to be when we have other roles and responsibilities?

I’m waiting — on tenterhooks — to see if my editor thinks I pulled it off.

Most children, in romance novels or in movies, are portrayed as possessing far more adult nuances to their conversation and body language than their everyday counterparts. Writers want them there for plot purposes, but once there, the writers aren’t sure what to do with them. 🙂

Cara, good point there. And the origina of the neuter gender goes further back in linguistic history to Sanskrit.

Micro-managing children is a fairly recent phenomenon of the 2+2 family unit. Children were raised by a whole assortment of people, whether the child is of noble or peasant birth, and so parents weren’t as invested emotionally in the child. Plus large families meant that it wasn’t possible to give each one so much attention. However, by sheer birth order, the first and last were always special.

I’m sure that was only after much due consideration given to the TLC provided by Spouse who’s undoubtedly ‘She.’

I’m sure that was only after much due consideration given to the TLC provided by Spouse who’s undoubtedly ‘She.’

My Spouse is indeed “She,” and we have a close, loving relationship. However, by long standing agreement, we are both allowed to see other computers.