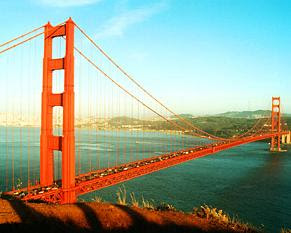 About a week ago I finished the 3rd draft of my mess-in-progress. Maybe it’s my imagination, but do I hear a collective groan? Or is it just that I sometimes feel as if five years from now I’ll be announcing the completion of the 327th draft or thereabouts. Because sometimes–and particularly with this story–I wonder if I’m just repainting the Golden Gate Bridge one more time. 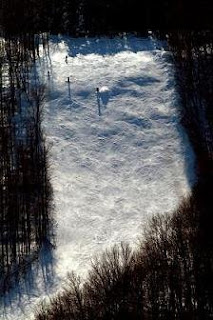 A happier metaphor for my writing process involves skiing. When I’ve been to ski resorts with friends, most of them like to try as many different slopes as possible. Once they’ve gotten down a slope in one piece they feel they’ve “conquered” it. Me, I like to keep at it until I get it “right”. The first few times I’m just trying to figure out the fall line, where the ice patches and moguls are, etc… Once I’ve done that, I can approach it with confidence and something I hope approaches grace.

With my writing it’s the same. Unlike other creative people who start a project–which could be a novel, a sweater or a computer program–in a spirit of fun and adventure, I’m always worrying about failure. I know, I’m a wimp! So it takes me 2-3 drafts to get a good feel for my characters and plot. Then comes my favorite part of the process: putting it all together, polishing until it feels right. And I’m finally there. đź™‚

Anyway, I’m not saying that others don’t do a good job with finishing and polishing. Professionals do all the parts of the process, even those we find scary, tedious, unpleasant or whatever. It’s just that we all have our favorite parts.

So how about you? Do you enjoy starting a project of any sort? Or do you prefer the final stages, when it all comes together? How about the messy process in between? Or do you enjoy it all (in which case I’ll try not to be too envious)?

Elena Greene grew up reading anything she could lay her hands on, including her mother's Georgette Heyer novels. She also enjoyed writing but decided to pursue a more practical career in software engineering. Fate intervened when she was sent on a three year international assignment to England, where she was inspired to start writing romances set in the Regency. Her books have won the National Readers' Choice Award, the Desert Rose Golden Quill and the Colorado Romance Writers' Award of Excellence. Her Super Regency, LADY DEARING'S MASQUERADE, won RT Book Club's award for Best Regency Romance of 2005 and made the Kindle Top 100 list in 2011. When not writing, Elena enjoys swimming, cooking, meditation, playing the piano, volunteer work and craft projects. She lives in upstate New York with her two daughters and more yarn, wire and beads than she would like to admit.
View all posts by Elena Greene →
This entry was posted in Writing and tagged creative process. Bookmark the permalink.

15 Responses to Drafting and polishing