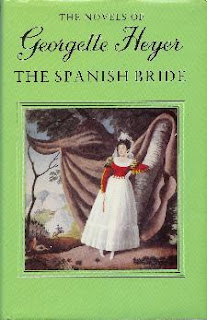 I’m continuing to immerse myself in research for my hero’s military background. I didn’t want to break from it even during my Easter travel, so I brought along THE SPANISH BRIDE by Georgette Heyer. It’s the fictionalized account of Brigade Major Harry Smith and his bride, Juana, whom he married after the siege of Badajoz, and their succeeding adventures from the Peninsular War through Waterloo.

A review on the inside cover from The Sunday Times states “Altogether, it is an exceedingly able reconstruction of historic events, in which the love story, though delightful enough, takes second place.”

This was probably a necessary warning to fans of Heyer’s Regencies that this book is not one of them. Personally I think the review is spot-on; I found the descriptions of military life far more interesting than Harry and Juana’s romance. There was plenty of story conflict in terms of the war but not much romantic conflict. Apparently it was love at first sight, and neither cared much for culture differences. Harry spoke fluent Spanish; Juana adjusted readily to the army life. The story is peppered by minor marital spats followed by passionate reconciliations, all of which would have been merely annoying had they not been brief. In fact, a few times I felt Juana was behaving like a melodramatic teenager before I remembered that she was indeed only fourteen when they married and just seventeen by the time of Waterloo.

Anyway, even though the circumstances were more exciting than usual, Harry and Juana’s story isn’t the stuff of a romance novel. That cover quote made me think about what people think of as a love story. Some diss romance for being unrealistic. I’ve always thought it was because they don’t believe in happy endings. But maybe it’s the other way around. I know many happily married couples whose stories (met at a party, dated, fell in love and decided to marry) are just not that interesting to anyone but those close to them.

Maybe some people think a romance novel is all one long romp in a flowery meadow and there’s no conflict worth following. Maybe they don’t realize that romance authors try to give their characters deeper problems to solve than most real life couples face. And these problems are not only external, such as the hazards of war Harry and Juana Smith faced, but something that challenges the relationship. Admittedly, some authors fall short, relying on misunderstandings or cardboard villains to keep things going. It’s probably one of the toughest challenges in writing a romance: to come up with two people who are perfect for one another and a powerful and believable problem that their love will have to overcome.

What sorts of conflicts do or don’t work for you? If you have read THE SPANISH BRIDE, what did you think?

14 Responses to The Spanish Bride