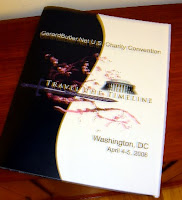 You all know I’m a Gerard Butler fan. On Saturday, my friend Patty and I attended the Gerard Butler Charity Convention held in Alexandria, Virginia. For two days Gerry’s fans gathered together, first to view his new movie, Nim’s Island, which opened on Friday; on Saturday to view the award-winning documentary, Wrath of Gods (the director attended the convention), about the making of the movie Beowulf & Grendel, learn Scottish dancing and Scottish customs, learn about making videos, signatures and avatars. Patty and I missed all that, but we did attend the main event, the banquet dinner and raffle. (To see why Patty and I would do such a silly thing like attend a Gerard Butler convention go here and scroll down to Better Late Than Never or the Joys of a Dark Hero) 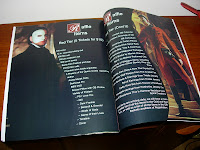 The raffle was HUGE. The photo shows part of the listings, but there were 8 pages of items and baskets. Lots of movie related items were signed by Gerry especially for the convention, including a huge Phantom of the Opera poster signed by all the cast. The baskets each represented one of his movies. There were books upon which his movies were based, signed by the authors. All the items were donated and all the proceeds will go to Kids Kicking Cancer. Next week I’ll tell you how much money they raised. It’s going to be in the thousands, wait and see.

I put all my raffle tickets in the “300 Lunch Box” bag and won two of them! (I gave one to Patty) Shown here is the lunch box and some of the other things from the conference. 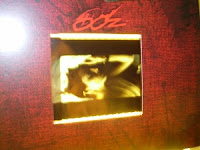 Here is a cel from 300 that was in the lunch box. It shows the Oracle girl. There was also a 300 tote bag and some magnets.

At the banquet we were shown fan videos, incredible works on the theme of the Timeline of Gerry’s career. There was a video compilation of Gerry with his fans from all over the world. (All these videos were done by fans) There was an award-winning celtic fiddler to entertain and a DJ and dancing rivaling anything you’d see at Romantic Times or Harlequin’s RWA parties.

What has any of this frivolity to do with us here at Risky Regencies?

The GB fans are a community, like we are here. They are tied together by admiration and affection for an actor, but, then, we are tied by our love of the Regency, of books, of writing. They share their troubles and triumphs like we do.

The ladies who shared our table have been friends for years. One of them battled cancer and, against the odds, beat it. The friends decided then to seize life and enjoy it together. Attending this convention–and the one in Colorado–and the one in Scotland–gave them a reason to get together. Their connection is strong and how they express it–by attending Gerard Butler conventions–is almost irrelevant.

The connections among all 272 convention attendees was a beautiful thing to see.
And our connections here at Risky Regencies are just as beautiful.

Okay….fess up. Who here is a Gerry fan? Lois, of course!! Who else?
Who has seen Nim’s Island and what did you think of it?

I’ve been a Gerard Butler fan ever since Dracula 2000, one of the worst movies on the planet. I even went to see P.S. I Love You solely because he was in it, because I can’t stand Hilary Swank (however the movie was actually good). I will see Gerry in anything including Nim’s Island when I get the chance. I often listen to the CD for Phantom of the Opera, so count me among the Gerryites!

Yay! Elizabeth!!
After a chance catching of The Phantom of the Opera in 2006, I caught up on all the GB movies I could get my hands on, but Dracula 2000 wasn’t the worst movie on the planet (Waterworld, perhaps??)–I disliked Reign of Fire more.

Count me in! I LOVE Gerrard Butler. I so envy you the convention trip, O Divine One! Sounds fabulous! What a great connection for friends to have. I love that sort of thing. I haven’t seen Nim’s Island yet, but I know I will. I too love the feeling of community here with the Riskies! We all love you too, Diane.

I didn’t get the appeal until I saw him doing ceiling pull-ups in Lara Croft, Tomb Raider.

the lunchbox (which I saw yesterday), reads “tonight we dine in hell.”

(I don’t get the Gerard Butler/leather panties thing but I thought the lunchbox was pretty funny.)

I did have fun, Megan, although it was mostly the watching-people kind of fun, because I’m only on the fringes of that community.

The videos were good, too!
And my lunch box.

There you go, Janet, making the others feel envious. You saw the lunch box!

Patty and I spent the night in the convention hotel and then on Sunday she drove me to our Washington Romance Writers Booksellers Luncheon. I had all my GB stuff with me.

Talk about worlds colliding. Worlds also collided at the convention hotel where a conference of Family and Marriage therapists was being held. I kept thinking I might see one of my old colleagues!

LOL That sure sounded like fun!!! 🙂 Alas, I’m a more limited fan — just loooooooooooooooove his Phantom. He’s the reason why I got into the whole Phantom universe! 🙂 And I liked Tomb Raider. . . and I do want to see Nim’s Island, but that’ll have to wait until it comes out on DVD.

But yeah, a lot of the other movies, I did try once! LOL 🙂 Dracula, well, I hate Dracula movies period, so well. . . but I did like Christopher Plummer! 🙂

Hey, Waterworld was actually good! If you want to talk bad, try seeing Down To You or Wing Commander or The Postman! 😉 And I loved Reign of Fire!

I’m glad, Diane, that I’m not the only convention-attending-fan at the Riskies. I can’t tell you how many signed photos of Star Trek actors I collected over the years… 🙂

He is sooo luscious!!

Check out “Dear Frankie” if you haven’t already. His performance in that movie really shows a very sweet and tender side that is really endearing.

Christina, I love Dear Frankie! To me it is so amazing that Gerry could do such an understated performance in Dear Frankie and also his more overtly emotional performances in POTO and 300.

I don’t think I have the stomach for 300, but Dear Frankie sounds right up my alley 🙂

Glad you had such a terrific time supporting such an important cause!

He was too sexy in 300. Did he take off his shirt? That would have been worth the whole conference. 🙂

How did I miss that was him in the Phantom, I’ll have to watch again.

LaShaunda, Gerry was not at the convention. He doesn’t attend these things, although he did once visit one in Las Vegas.

I would not be so calm about telling about it if he had been there!

I’m not sure Down to You was the worst movie ever made–that may be Manos the Hands of Fate, which gave me nightmares, literally–but it was worse than Battlefield Earth that same year, which is saying something. And The Postman (shudder)–to take an excellent novel and butcher it in that way just makes my blood boil. (But not literally, this time.)

While we are on Kevin Costner movies, Todd, I would add Dances With Wolves. My gosh that was slow-paced and boring.

I actually really loved Dances With Wolves! 🙂 I thought it had a lot of interesting ideas and observations, and gorgeous scenery… (Though it bugged me that the Native American woman he fell for was played by Mary McDonnell with feathered hair…) 😉

I think Costner just kept drawing the wrong message. “Hmm, that movie was long and slow and people liked it, so I’ll make this one even more long and slow. Yeah!”

And Cara–are you suggesting that Native Americans didn’t have blow driers?!!

Yeah…why, when taking such care to depict Native Americans authentically, did he choose to make this silly choice? She could have had the same hair as the women in the culture she lived with.

I don’t dispute that the scenery was beautiful and the depiction of NA’s respectful, but the movie was too long, too slow-paced, Kostner’s acting too “one note” and, thus, a big snooze for me.