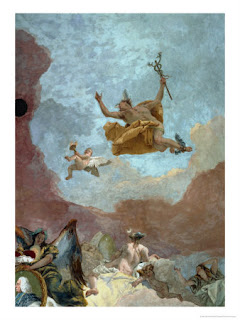 After blogging last week about caregiver heroines, I realized that whether they work for me or not really boils down to the message coming through the book.

“Do the right thing and happiness will result” is one I can get behind. In real life, sometimes bad things happen to good people but it’s still an idea to live by. But sometimes it comes through “Neglect yourself and someone will rescue you”–a bit dodgier as a principle.

But really, when I’m deep in a good book, I’m not thinking about messages at all, I’m just annoyed if I’m interrupted and then I wonder why those demanding children want dinner again, after all I fed them yesterday… đź™‚

When I’m writing my own stories, I try to ignore any messages that come through because I don’t want them to seem forced. While I wouldn’t go so far as to agree with Mark Twain that “persons attempting to find a moral in it will be banished”, I hope no one notices any at least until she’s finished the book.

Maybe messages come out wrong when the reader is too obviously smacked over the head with them. But romance as a genre gets dissed for unrealistic messages. Naysayers interpret “Love has healing powers” as “If you love him enough, an abusive man will change”. I don’t know which (if any) specific books cause them to make that leap.

Do you think about messages when you read/write? If messages get twisted, do you think it’s through clumsy writing or perhaps readers’ prejudices?

Which messages in romance novels resonate most for you? Least?

Elena Greene grew up reading anything she could lay her hands on, including her mother's Georgette Heyer novels. She also enjoyed writing but decided to pursue a more practical career in software engineering. Fate intervened when she was sent on a three year international assignment to England, where she was inspired to start writing romances set in the Regency. Her books have won the National Readers' Choice Award, the Desert Rose Golden Quill and the Colorado Romance Writers' Award of Excellence. Her Super Regency, LADY DEARING'S MASQUERADE, won RT Book Club's award for Best Regency Romance of 2005 and made the Kindle Top 100 list in 2011. When not writing, Elena enjoys swimming, cooking, meditation, playing the piano, volunteer work and craft projects. She lives in upstate New York with her two daughters and more yarn, wire and beads than she would like to admit.
View all posts by Elena Greene →
This entry was posted in Uncategorized and tagged morals, Romance. Bookmark the permalink.
0 0 votes
Article Rating
Subscribe
Login

I think the best messages are those that emerge from the story instead of those that are consciously foisted on the characters. As a writer, it’s fun when my characters tell me what message they want to deliver.

I believe in the collective unconscious of a message, sort of what Georgie Lee says above–anything that is too obvious isn’t good writing, it’s good preaching, and I don’t want to read good preaching (nothing against that, per se, but just not my bag).

I find similar themes in my writing, and in the authors I like–Anne Stuart, for example, writes bad, bad heroes who find themselves unwillingly redeemed (sort of) by the heroine. Loretta Chase writes about male stupidity and pride, except when she doesn’t, as in Mr. Impossible.

I do like thinking about themes, I just don’t like forcing them onto anything, just letting them happen organically.

Hmm… I don’t think I appreciate any heavy-handed messages, even ones I agree with (abusing people is bad, drugs destroy lives…)–I think in general, I like messages that resonate with what I believe and universal themes like hope and redemption, that there are always second chances, that beauty’s not just on the outside, and so on.

When I was a kid, I loved books like Anne of Green Gables and the Betsy-Tacy series, so my grandmother thought I might like these Elsie Dinsmore books. OMG, what a big old pile of loathsome preachiness those books were! I don’t like “message” books like that.

BUT like Megan, I enjoy thinking about themes in books, They usually aren’t hugely obvious in romances, but it seems like my favorite authors do have certain threads running through their stories. Makes it fun. đź™‚

I have to agree that the best themes are the ones you don’t realize are there until it is all over. I love stories of redemption. I also love stories where the hero and heroine discover that they are loved for themselves and not what they think others want them to be. To discover one’s own value is a great lesson to learn.

I never think about messages when I read or write. I just want to get lost in the story. I think I’d rather just “feel” the message than have to think about it or analyze it.

I’m trying to figure out the themes in my books…..I think the theme is “everyone deserves to be loved.”

It seems like everyone agrees–if a message is there, it should be done with a light touch. đź™‚

I think that a “message” can arise without the author necessarily consciously putting it there, though, due to artistic choices. In real life, random stuff happens, sometimes; in art, writers do things a particular way because it “feels right.” But this can result in some kind of message or theme running through the book when it’s all done.

I remember something that Jennifer Crusie said about Welcome to Temptation–when she started writing it, she thought it was going to be about sex, but when it ended she realized it was actually about motherhood.

Yeah, preaching often backfires on me though I can deal with some, as in Louisa May Alcott, when it has a ring of sincerity.

Not all my books have the same theme but a few might be “Seek happiness and you will find it (after some adventures)”. I’ve seen a bunch of more recent books like that. I like the idea of a heroine setting out to find her bliss.

My overarching theme, no matter what genre I’m writing in, seems to be “claiming your strength.” A lot of my characters start out thinking they’re powerless but learn otherwise, and have to find the courage and the confidence to stand up for what they want and what they believe in. Sometimes I express it as “Fortune favors the brave,” or, borrowing a line from the Buffy series finale, “Make your choice. Are you ready to be strong?”

I also like to poke holes in entrenched power structures and skewer the pretensions of the elite whenever I can. Which makes my WIP something of a challenge for me, since Wellington kinda insisted on a starring role, and if anyone is an elite embodiment of the British power structure of the time, he’s it. I just can’t help having a ginormous historical crush on him despite that.

Anyway, even though I’m aware that I can’t seem to write without using those themes, I’m not actually trying to preach, so hopefully they don’t get in the way of the story.

As a reader, I value any story where courage and integrity win the day.

Hmm… If there’s a theme running through my novels, it might be “the underdog can win.” Or something like that.

BTW, I’ve been thinking about the whole martyr thing… If it’s overdone, it bugs me (I used to read old categories where the heroine just let everyone treat her horribly, for no good reason), but I do like hardworking, undervalued heroines. Then I like them to have a happy ending!