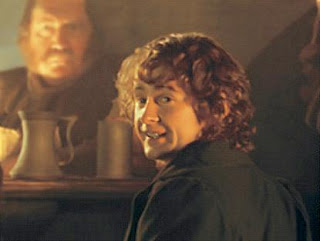 I first started reading Lord of the Rings when I was ten. I loved what I read, but partly through the first book, when Frodo and his friends were at Bree, I put it down and didn’t pick it up again for a year.

My older brother, who influenced much of my reading, was not happy. “But you kept telling me you loved it!” he argued. “Why did you stop? You were just telling me how funny it was, how you loved the part at Bree when they were celebrating!”

And it was true. I’d put the book down at what was perhaps the lightest point in the book. Of course, now, I can look back and realize there was a reason I hadn’t put the book down when Frodo was about to be captured by Ringwraiths, or eaten by an evil tree, but at a point where the 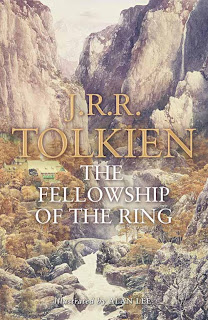 tension was relatively low…where he and his friends were (to my ten year old mind) safe and happy.

So this offers support to the oft-repeated advice: keep your characters in trouble, the tension high, the suspense building.

I’ve been questioning that recently.

Or, at least, questioning some of the advice that often goes along with that, such as: give your characters one hell of a hard time. Make their greatest fears come true. Keep them always off-balance. Don’t let them win till the end. Start with a bang, with a serious problem, and just keep building the suspense, the drama, the trauma, until at the black moment all is lost…

And, sure, I can see that that can lead to a heck of a page-turner, at least with a protagonist the reader cares about. But is that all there is to life, to novels, and everything? 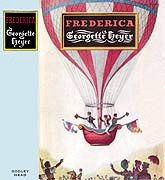 What about the part of the novel that sticks with you? I can remember gorgeous banquets in Oz, poetry in Middle Earth (and getting drunk at Bree), happy family scenes in Frederica, more banquets at Hogwarts (I guess I love food!), delightfully silly plotless dialogue in Northanger Abbey…

When a reader remembers the world in a book and thinks “I wish I lived there,” I think there’s more going on than breathless page-turning heart-pumping pace. There’s color, and life, and texture. Music. Magic. Depth.

Which is not to say that I’m against pace. Or plot. Or excitement. But nowadays, I think I want to read both.

And I want to write both.

What do you think? Does a consistently tight pace make a novel’s world shallower, or do you think that’s a false duality? If you think there’s something in it, which do you prefer?

(N.B. — I’m actually out of town right now on sudden family business, so I may or may not be able to answer comments in a timely fashion…but I’ll stop in as soon as I can!)

Cara
Cara King, author of MY LADY GAMESTER, in which the pace pauses for an elephant

Elena Greene grew up reading anything she could lay her hands on, including her mother's Georgette Heyer novels. She also enjoyed writing but decided to pursue a more practical career in software engineering. Fate intervened when she was sent on a three year international assignment to England, where she was inspired to start writing romances set in the Regency. Her books have won the National Readers' Choice Award, the Desert Rose Golden Quill and the Colorado Romance Writers' Award of Excellence. Her Super Regency, LADY DEARING'S MASQUERADE, won RT Book Club's award for Best Regency Romance of 2005 and made the Kindle Top 100 list in 2011. When not writing, Elena enjoys swimming, cooking, meditation, playing the piano, volunteer work and craft projects. She lives in upstate New York with her two daughters and more yarn, wire and beads than she would like to admit.
View all posts by Elena Greene →
This entry was posted in Uncategorized and tagged Uncategorized. Bookmark the permalink.
0 0 votes
Article Rating
Subscribe
Login

Seeing LOTR of course I had to stop and read and comment! LOL! I love a good page-turner; however, I’ve found that simply being a good page turner doesn’t mean I’ll want to re-read the book. Once you know the end, what’s to bring me back? The characters and the world they live in. I’ve read some stories that are so packed with trauma I find it utterly unbelievable and so melodramatic as to be ridiculous. Then I find myself wanting to pull a Ret Butler to Scarlet O’Hara. (My apologies to Gone With the Wind fans.) Best case scenario for me is a little bit of breathing room to become acquainted with the characters and their world. Sitting on the edge of my sit becomes uncomfortable after a while. I’m not in the least disappointed in authors who write in such a manner that I’m able to put down their book so I can sleep or work. But if I don’t like the characters, then all the highest drama and perfect plot twists will not hold my interest.

As a side note, I read someplace recently about the difference between Tolkien and the typical “fantasy” writer. They were comparing how they create their world so the reader sees it. The typical writer will describe a tree to the left and the pathway that curves to the right, endeavoring to create a specific picture for the reader. Tolkien has a gift for creating a “general” picture, so that the reader is able to draw on their own memories. So when Tolkien describes a warm valley of green rolling hills, anyone is able to say, “Yes! I know exactly the type of place he’s talking about.” I admire his ability to create a world so complete that there is the feeling it surely must be real.

I’m addressing the exact same issue in my current WIP. Especially how to add richness & fun without drag or an unwieldy page length.

Thinking about the over-arc-ing tension as either being a guitar line (top) or bass line (bottom)as it moves from scene to scene and chapter to chapter is helping.

PS my favorite remembrances of Tolkien are seedy cakes and ale!

I must admit that as a child one of the things I most loved about reading was imagining myself living in another world–perhaps a fantasy world, like Narnia or Middle Earth, or a historical world like ancient Rome, or a science-fictional world like the Mars of Edgar Rice Burroughs. So while I always like an exciting story, I also appreciate it when a book stops and smells the roses.

An example that I read recently was Jack McDevitt’s A Talent for War, which was definitely slow-paced rather than the reverse, but created a fictional world that felt real and kept me reading. That’s a science fictional example, but I’ve read books like that in many genres. One of the best books I’ve read in years is The Historian by Elizabeth Kostova, which again moves slowly but builds up layers and layers of story in a way I deeply enjoyed.

Not to say that there’s anything wrong with a good page-turner! Or even a bad one, if I’m in the right mood. đź™‚ But not all books have to play by the same set of rules.

My favorite books are the ones that create vivid worlds, and also vivid communities. I’m thinking of the Scooby Gang in Buffy the Vampire Slayer, Jack Aubrey and Stephen Maturin in Patrick O’Brian’s books, Anne Shirley and the friends she collects from her childhood at Green Gables onward, etc. And while one of the factors that can forge those bonds of love and friendship is meeting challenges together, I don’t want nonstop action and plot. I want the characters to get breaks to enjoy being together. Those are the scenes I remember most.

How about the Vorkosigan series by Lois McMaster Bujold? I am really not a science fiction reader, but Bujold created a world I totally believed in and a character (Miles) I loved.

And I mentioned it recently…the world in the All Creatures Great and Small books. Now those books weren’t fast-paced.

I heard Mary Balogh talk about one of her books where the tension was relentless and that she later learned to put in some breaks in the tension.

I like to thread in light moments, funny moments, romantic moments.

Ladyhawk, I totally agree with you about the characters and the world being what brings one back to a book… And thanks for the very interesting Tolkien ideas!

Jane George, I’ll see if thinking about the bass line idea helps me in my plotting!

Susan Wilbanks — interesting you should bring up Buffy et al… Thinking about it, I think the rich and interesting world not only draws one in and back, but helps keep the different episodes from seeming too similar… Okay, that may not make sense right now the way I put it, but I think I have an idea here, and after I must on it a bit I think it will have more sense (or at least clarity) then… đź™‚

Diane, speaking of Bujold, I’m rereading the Vorkosigan books again… (Bujold will be the Guest of Honor at Worldcon this summer, which Todd & I will be attending, so I’m going through the series again…) Yes, fantastic world. So full and fascinating and..okay, way tired from plane trips, pardon my lack of useful adjectives….

Cara (of the nine yawns…and the jet lag of doom…)

Cara, I had a big laugh of your pace pausing for an elephant. In fact, when I first read the title, I thought the post was going to be about something else. Oy.

Diane wrote, “And I mentioned it recently…the world in the All Creatures Great and Small books. Now those books weren’t fast-paced. “

JaneGeorge: Auntie Mame. Heh. I remember when we did that at our company’s theater troupe a few years back. I had this godawful shiny pink tulip dress that was garish under the bright stage lights. Ick. Oh, but the singing was glorious, even when the lead dropped entire verses of her songs and the orchestra and conductor scrambled around the score to find their spots.
Kinda difficult to hurry up a laboring cow, even though you’d wish it were so, when you had your arm up her ahem-ahem.

I prefer books that have both: memorable scenes that move luxuriously through the details and scenes that leave you gasping for breath. A recent book I read, Joanna Bourne’s A Spymaster’s Lady, does that magnificently.

World Con, Cara/Todd? Is that a sci-fi/fantasy conference?

WorldCon, Cara/Todd? Is that a sci-fi/fantasy conference?

Yeah, it’s kind of the big one–the one where they give out the Hugo Awards. The next one is in Denver:

I’m busy trying to read the nominated novels and stories so I can vote on the Hugos this summer. đź™‚