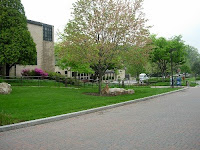 ‘T is pleasant, through the loopholes of retreat, To peep at such a world… William Cowper

It was a pleasant Washington Romance Writers Retreat. This year we met in a new location, The Bolger Center, a lovely conference and training facility owned by the Postal Service. It used to be a convent and you could tell in places. The Stained Glass Room where we gathered as a whole group was obviously the chapel complete with confessionals in the back. 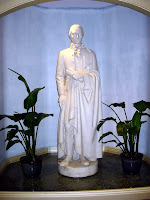 This statue of Samuel Osgood, the First US Postmaster General, stood in a location that must have once held a statue of the Virgin Mary or one of the saints.

On the whole it was a nice place. The air conditioning had not been turned on yet and, as happens in the Washington, DC, area sometimes, it was 80 degrees in April. So it was HOT. Then Sunday it was 60 degrees and was COLD. 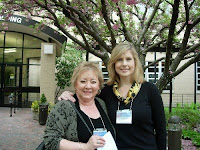 I didn’t see many workshops, except for one I moderated. Victoria Alexander, who will be the keynote speaker at RWA in San Francisco, spoke at the Retreat and did a “Chat With…” workshop. Here’s Victoria with Kathryn Caskie, both lovely “original blondes”. I went to another workshop with the publicist for Avon who talked about what an in house publicists does. Basically, an in house publicist works to get the word out about your book in ways that don’t cost money. Magazine ads, for example, cost money; TV appearances, booksignings, newspaper articles don’t.

Karmela Johnson and I coordinated the agent/editor appts, which is why I didn’t go to workshops. I love doing this, though, because you get to know the agents and editors and you also get to help the nervous, hopeful writers who are pitching for the first time. but you miss most of the workshops .

I won a Tarot Card reading by Nora Roberts. I won this a few years ago and, like that time, her reading was all about home and family, all good things, but I think it is fascinating that this is what she sees at a writer’s gathering when all we’re thinking about is writing. The card that represented my husband was the King of Rods. He liked hearing that one! 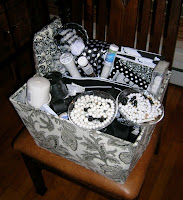 We all donate baskets and items to raffle off as the last event of the weekend. Here is the one my friends Helen, Julie, Virginia and I donated. We called it It’s All There in Black and White. 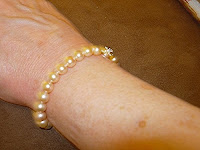 Here is what I won, a pink pearl bracelet. 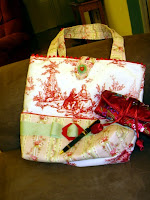 My favorite part of the Retreat is being with friends. 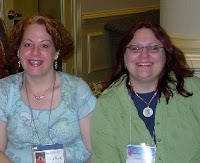 On Saturday we had the awards ceremony, including the Marlene awards, which I cannot report until they are officially announced, I’ve been told. So we should be able to say something by Tuesday. 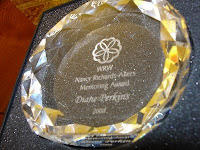 On Saturday we also give out special awards, and the very best-est thing happened! I won the Nancy Richards-Akers Mentoring Award. Members make the nominations for this award and the Board decides who to award it to. I was nominated by more than one person, which was incredibly wonderful. I cried…..

At our Published Author forum we discussed blogging. I said I thought Risky Regencies had made more readers familiar with my name and my books. Nora Roberts said she’d rather spend her time writing books, but she enjoys responding to blogs. Some others seemed to take the entire process of blogging verrrrry seriously. I said I really do it because it is fun.

What would you like to know about the WRW Retreat?

Diane Gaston is the RITA award-winning author of Historical Romance for Harlequin Historical and Mills and Boon, with books that feature the darker side of the Regency. Formerly a mental health social worker, she is happiest now when deep in the psyches of soldiers, rakes and women who donâ€™t always act like ladies.
View all posts by diane →
This entry was posted in Uncategorized and tagged WRW Retreat. Bookmark the permalink.