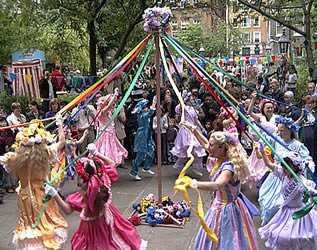 Unite and unite and let us all unite,
For summer it is come unto day;
And whither we are going we all will unite
In the merry morning of May.

Yes, it’s May Day. No one really knows the origin of the celelebration, although it almost certainly derived from the Celtic feast Beltane.

One of the rituals associated with the holiday is maypole dancing, one of the many popular pastimes Cromwell put an end to in 1644. You see–how shall I put this delicately for you Regency ladies–quite often the top of the maypole had a suggestive shape. Although May Day customs were revived after the Restoration, maypole dancing enjoyed a massive comeback in the Victorian era, when musicologists began collecting folk songs and rituals. The decorative ribbons and flowers stayed, and the whole thing became wholesome and practiced by schoolchildren. 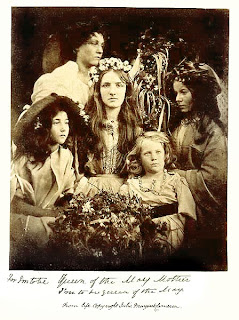 As part of the May ritual, the celebrations began the night before with couples disappearing into the woods to gather may (hawthorne). They’d emerge the next morning with stupid grins and armfuls of flowers. A Queen of the May would be chosen, and sometimes a King of the May.

Sometimes the Queen of the May is not a person, but a special doll that is brought out each year and paraded around the community in a shrine of flowers made out of linked hoops. In some places you can find Morris dancers.

In Padstow in Cornwall, the Padstow Oss is paraded around the town to the beat of a drum while the song I quoted at the beginning is sung. Everyone gets really drunk. The song has references to St. George, rather like a mummers play, and is probably very ancient.

You can hear the song, read all the verses, and find out more about the Padstow Oss at its website, Blue Ribbon Oss.

May Day Traditions and Customs in England and Christine O’Keeeffe’s May Day Customs sites are also great places to find out about the varied and strange May Day celebrations in England and beyond.

Have you ever joined in a May Day celebration? Or tried maypole dancing?–I have. It’s really difficult! And once you’re tangled up, there’s no going back.

And a bit of shameless self promotion: The Rules of Gentility is a finalist in the National Readers Choice Awards!

At our UU church the children dance around the maypole the first weekend of every May as part of their education on pagan traditions. Last year earthworms came up out of the ground, maybe because of all the stomping and noise. Fun.

Congrats on the NRCA final!

Seems to me I danced around a Maypole when I was in school, 4th grade or so. I don’t recall if the pole had a suggestive shape though.

Cromwell must have been a fun guy.

We had a maypole at the Renaissance Faire that I worked at in Tuxedo, NY but I don’t think I ever danced around it. Spent more time in the maze. Ah, Cromwell, what a killjoy!

Congrats on the NRCA final.

Alas, nope, never did anything even remotely related in my life. . . but big congrats!!! 🙂

We used to do the Maypole dance in elementary school every spring, but I have no recollection of it.

I’m sorry, but who would want to dance around a penis?

I belong to a group of friends who do a maypole every year as part of our Beltane celebration. It’s very fun. My British expatriate friends usually come because of the tradition. This year we’re holding it late, on Mother’s Day, which fits in a twisted sort of way.

This year I am in charge of making a new pole. Our old pole is developing a bit of a, shall I say, curvy droop. Totally unacceptable!

The new pole’s going to be very cool. I plan on attaching the wire frame of a lampshade to the top with a swivel bolt. The ribbons will be tied around the bottom, the rest decorated with flowers, and the lampshade will turn as we dance.

Anyway, it’s exceedingly fun and silly. And dancing around a penis ensures fecundity and abundance in all we do for the season. 🙂

And dancing around a penis ensures fecundity and abundance in all we do for the season. 🙂

LOL, Jane! Maybe I should suggest this to my writing buddies for our retreat this weekend. 🙂

That Renaissance Faire in Tuxedo is a blast.

Cromwell certainly did have a knack for taking the joy out of most anything.

In the Roman Catholic tradition, Mary is venerated on May 1st. Statues of her are paraded about and decorated with flowers. Sound familiar?

Wasn’t May 1st is also May Day or Workers Day in the former Soviet Union?

Congrats on the final, Janet.

And I wouldn’t touch the penis question with a ten foot May Pole. 😉

Congrats Janet! I LOVED Rules of Gentility! I remember some great May Day festivals when we lived in England complete with maypoles and bonfires.

Many many years ago when I was in the equivalent of an elementary school we had a May Day celebration with maypole dancing (hence I know how difficult it is!) and a May Queen. Lots of flowers and dancing, and a very pagan affair which was funny since it was a C of E school. But I think the C of E, like Elena’s church, has the talent to be inclusive of just about everything.

I’m sorry, but who would want to dance around a penis? My feelings exactly, Megan; there’s too much dancing around them metaphorically anyway, let alone decorating them with flowers and ribbons.

I suspect that the dancing itself, and of course the pagan connotations, may have had more to do with banning maypoles than the “suggestive shape.” Let’s face it–tons of things have a “suggestive shape” if your imagination is sufficiently vivid, and you just can’t ban them all. 🙂

Remember the old joke about the Puritans–they were against sex because it might lead to dancing.

Congratulations on being a finalist in the National Readers Choice Awards!