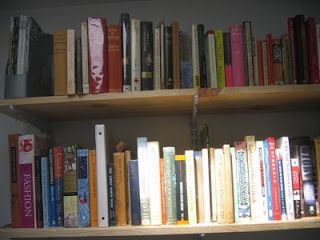 As anyone who’s paid even passing interest to my posts lately knows, I’ve just moved. After 13 years of being in the same apartment.

So writing? No, not so much lately.

But I have set up my office, sort of; when Amanda was visiting, she helped me lug boxes of research and Regency books up to the second floor, where I sit typing now. Last week, I managed to get them onto the shelves.

I have a lot of books, especially for someone who admits she’s not much of a researcher. What I do get from my vast collection, however, is inspiration; for example, I have a book I snagged from my dad’s even vaster collection: 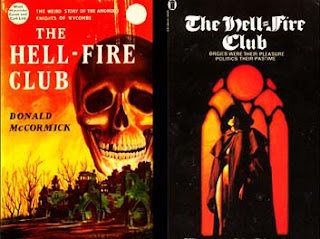 The Hell-Fire Club by Donald McCormick

I haven’t even opened it (mostly ’cause it smells funny, the way old paperbacks do), but how inspiring is it, even from the cover? The top line on the book reads “The Weird Story of the Amorous Knights of Wycombe.” Come on, how awesome would it be if one of our heroines snuck into the Hellfire Club? Or the hero was a member? 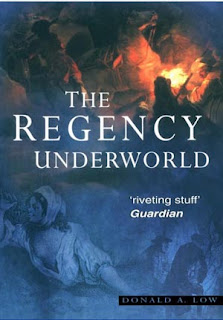 I also have on my shelf a book I’ve mentioned here before, the Regency Underworld by Donald A. Low (do you smell a trend? Yeah, I don’t think I’ll be writing about a traditional debutante and her Season anytime soon. My new agent likes it that I’m edgy, which is cool).

Another book that will be way useful, when I actually open it, is The Great North Road by Frank Morley, which my dad (my research partner) left notes in after writing me a huge document on all roads leading to London (I am writing a “Road To . . .” series, so my characters are traveling to and fro).

Mostly, though, I sit here and look up and smile because the two shelves look like they belong to a Regency Author’, which is what I am.

My favorite research books are The Prince of Pleasure and the Regency by JP Priestly (also his book The Edwardians), To Marry An English Lord (you just know I’ll be using that one someday). Also, Sex with Kings/Queens by Eleanor Herman, Our Tempestuous Day by Carolly Erickson.

My favorite books are almost always whatever is new and shiny (which, at the moment, is STINK), but the one I couldn’t live without is Trumbach’s THE RISE OF THE EGALITARIAN FAMILY.

Mostly, though, I sit here and look up and smile because the two shelves look like they belong to a Regency Author’, which is what I am.

I feel the same way about my research collection. It’s the one part of my book collection that’s well-organized (alphabetized by author within broad subject areas). Some days I’ll just sit there gloating over it, saying to myself, “Wow, it looks like an expert on Napoleonic-era military history and Regency England lives here–and that would be ME!”

I LOVE those book titles (and subject matter) and can just see your creative wheels turning!

Though the Regency period still fascinates me, I am, at present, enthralled by Americana, turn of the century New York and the post-Civil War period. Oh, and the Roman Empire. No, not just because of James Purefoy or Ceiran Hanes.

As I am presently writing contemporaries centered around the restaurant industry, I really haven’t read many research books. I just ask my friends in the business everything I need to know.

Congrats on setting up the library! How satisfying.

I’d told my CP I was interested in the Hellfire Club as a setting. She invited me over to watch a British ghostchasers tv show on the Hellfire Caves. Funniest thing ever. They ran around in the dark scaring each other peepless.

On the Beau Monde loop, Kalen Hughes mentioned a series coming out on DVD in June that sounds great. It’s called City of Vice and takes place in Georgian era London.

I am just beginning to gather my Regency research library and I am having a blast! My latest acquisition is Steven Parissien’s REGENCY STYLE. What a gorgeous book! JANE AUSTEN IN STYLE is another favorite. Gerraud’s ENGLISH COUNTRY HOUSE is another gorgeous book. The Hellfire books sound great and I need to get them. I have an index card file box FULL of Regency Research books I have discovered through blogs, author interviews, etc. They are on my “NEED TO BUY” list!

My other favorite historical periods? Anything British – the Victorian, the Georgian, the Elizabethan, the medieval, you name it! I LOVE British history. I have a very old falling apart book I bought in England as a child. It is called PEOPLE IN HISTORY and I had it memorized as a child.

I will say McCullough’s 1776 is another favorite history book.

It’s very cool, because I’ve actually read a lot of the books you all have mentioned. When we first started dating, Cara bought me a copy of The Prince of Pleasure so that I would know more about what the Regency was all about, which gives me a real sentimental fondness for that book.

I love many periods of history, too…right now I’m reading a couple on Elizabethan and Restoration London. And I’ve been fascinated by Ancient Rome for many years.

What a fun feeling, Megan! I can totally relate. I love gazing upon my research books–so much potential just waiting!

Some of my husband’s family think I’m nuts, though. A few of them are not readers. At all.

I love Priestly and Erickson. I use both of those a lot. Also, Hibbert’s London Encyclopedia is a must. A fun one that I’ve gotten a lot of use out of is Alden’s Romance of the Road.

I love the Georgians too! And colonial America,and also turn of the century America.

Well, I only really have a few history related books (as you guys are probably sick to death of hearing, I’m sort of half romance, half science/astronomy/physics and all things related to such topics LOL). . . are Ancient Egypt related.

If it’s not a general book that includes something about all periods of Egypt, I like the 18th dynasty the most, and Hatshepsut my favorite Pharaoh. I have one and a half bios on her. . . I call the one half because it’s a photocopy of the book I kept looking at back in the college library. Always hoped they would get rid of it since it was so old, but nope, never did, at least while I was there. LOL So, a lot of time and money later, got me a copy of it.

But if you really want me to get into all the books I have on Einstein, I won’t mind! 🙂

Lois, who hears the groans from here. . .

“Some of my husband’s family think I’m nuts, though. A few of them are not readers. At all.”

Ah yes–THOSE relatives. I’ve had a few. They always look around my little, book-crammed house and say “You have so many BOOKS. What do you do with them?” I want to say “I read them, you idjits,” but I try to be nice. 🙂

And you all know I love many, many periods! I’ve been really thinking mid-18th century lately.

I’m not a researcher, but I was so moved by INCIDENTS IN THE LIFE OF A SLAVE GIRL when I tried my hand at YA. This was a great post and I loved those titles.

Ooh Kwana, I had to read that book for my history class–very good and very moving.

I second Elizabeth’s nod to the Priestley book on The Edwardians. Another excellent book I regularly read is 1900s Lady by Kate Caffrey.

I also had that striking realization while looking at my bookshelves: I’m an Edwardian writer. Very bizarre even though it’s my own fault for being a bibliophile.