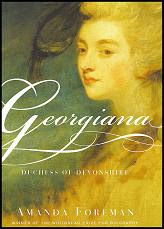 Ever since it came out, Georgiana, Duchess of Devonshire, the Whitbread Award winning biography by Amanda Foreman, has been on my TBR list. A few weeks ago, I caught up with it.

I already knew a little about Georgiana before reading the book. I knew that she was active in Whig politics, married young, amassed enormous gambling debts and lived in a ménage à trois with the Duke and her friend (and possibly lover) Lady Elizabeth Foster for over twenty years. I also knew, through my research on the history of childbirth, that she was an affectionate mother and breastfed her first child, a girl, for over a year despite family pressure and “their impatience for a son and their fancying I shan’t so soon if I suckle.” I was intrigued by all these things and not judgmental (it’s not surprising that a girl married at 17 to a man with little affection for her should run into trouble) but until I read the bio, I didn’t get a clear sense of how all these aspects of Georgiana merged into a complex and fascinating woman. I’m not going to go on and on about it, since many of you have probably already read the book. For any who haven’t, I highly recommend it. 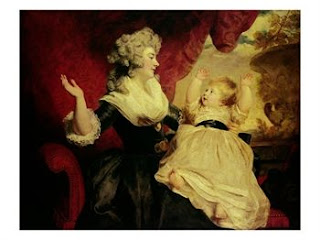 One thing that struck me while reading is how much the raciness of the Georgian period echoed through the Regency and has influenced characters in Regency fiction, especially older heroes/heroines or the parents of younger ones. The mother of the hero of Georgette Heyer’s False Colours is much like Georgiana, married young to a man who did not appreciate her, unable to control her gambling. In Heyer’s Sylvester, the hero’s mother, a duchess, is crippled like Georgiana’s sister, Lady Bessborough and like Georgiana, writes poetry. There’s also a thread of Georgian looseness (liberal politics, playing with gender roles) in modern Regency set romances like those of fellow Risky Janet and Risky friend Pam Rosenthal. I like it. A lot. 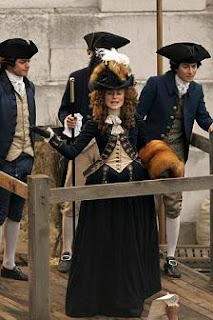 The book is also making me more interested in the upcoming film starring Keira Knightley, which is said to be adapted from the book. Of course I have some qualms as to how far it will be adapted. Georgiana’s life was so interesting it shouldn’t need the Hollywood treatment. As for Keira Knightley, I like her as an actress but I’m not sure about her in this role. But we’ll see and I’m sure we will talk about it!

Another thing I really want to do now is read some of the published letters of her daughter Harriet (“Hary-O”), who seems to have been a clever and interesting woman and even rather sane considering the milieu to which she was born.

If you read Georgiana, what did you think? What are your favorite period bios? Are you looking forward to this film?

And do you like a splash of Georgian in your Regency?

I bought this book when it came out in paperback in the UK before it arrived in the States, and I also had the privilege of hearing Amanda Foreman read at Barnes & Noble when it came out (she actually married a guy I was temping for at Morgan Stanley, small world). I’ve always found the story of her relationship with her husband and Lady Bess fascinating, and the complexity of her character, whig hostess and compulsive gambler, interesting. The portrait of her by Gainsborough was stolen by Adam Worth. I find the whole family interesting. I have Janet Gleeson’s book about Harriet Bessborough in my TBR pile.

As for the film, I’ll see it because of the costumes and Ralph Fiennes. I don’t know if Keira Knightly has the acting chops yet for the role. I would rather have seen Kate Winslet play the part.

Ooh, I loved this biography. It was so well-written, and gave such a great picture of life at that time. I am definitely looking forward to the movie, and KK might have the requisite flightiness it seems Georgiana had–although in reading the bio, it is clear G. was more than just a flighty woman, although that was a part of her personality.

I love this book! It’s like reading a Georgina soap opera. 🙂 Amanda Foreman has a great readable style and an obvious passion for her subject.

Georgiana was a fascinating mix of elements, wasn’t she? I’m looking forward to the movie too. Who’s playing Bess? Does anybody know?

According to imdb.com, Hayley Atwell, who played Mary Crawford in the new and much maligned version of Mansfield Park is playing Lady Bess. Dominic Cooper (Willoughby in the new S&S) is playing Georgiana’s lover, Charles Grey.

I’ve read parts of the bio, and really enjoyed what I’ve read. Maybe I should read the whole thing before the movie comes out…

It’s been a while since I read this, but it is great! I also really enjoyed the recent Harriet bio, they had such parallel lives in so many ways.

Kate Winslet would have been a great choice to play G! But I’ve been pleasantly surprised by KK in the past, hopefully this movie will be good (the costumes look good anyway, LOL!)

I loved this book!

I haven’t read this book, though it is in my “extended” TBR pile (meaning I may get to it within my lifetime, but don’t hold your breath). I do find the Georgian period absolutely fascinating for many reasons–for example, how could so many brilliant people wear those damned silly wigs?

I’ve read a lot of books about the period, and I recently walked through the “Enlightenment Gallery” at the British Museum, which was cool.

I don’t read too many biographies, partly because they require (at least for me) a lot of effort to get into before they pull me along. Two that I did love: Elizabeth Longford’s Wellington: The Years of the Sword, and Edward Rice’s Captain Sir Richard Francis Burton. And Benjamin Franklin’s Autobiography is an excellent read (and quite short–even better!).

FWIW there’s an old Mills & Boon Historical based on the life of Hary-O. An Unexpected Passion by Paula Marshall.

Amanda, I thought there had been a recent bio of Harriet but googling around this is what I found:

Piety and Wit: A Biography of Harriet Countess Granville 1785-1862 by Betty Askwith
Collins, 1982

Is this the book you meant?

Elena, I think she meant the recent book by Janet Gleason about Georgiana’s sister Harriet, Privilege and Scandal, not Georgiana’s daughter.

Thanks, Elizabeth! That one sounds good too. The TBR list grows…

Afterthought…it does seem like almost every woman in the book is named Harriet, Caroline or Georgiana, doesn’t it? It can lead to confusion though Foreman does her best to keep it straight. No wonder they used so many nicknames, i.e. Gee, Little G.

I thought that Foreman’s biography was excellent. I’m looking forward to the movie, although I agree that Kate Winslet would have been my choice. I like KK but I think Winslet’s portrayal would have more depth and shading.

After reading the book I must admit it served to confirm my prejudice against marrying very young. Georgiana was only 17, and she so clearly misread the Duke’s personality. IIRC, she hoped for a marriage such as her parents had and thought his reserve was only on the surface and would dissolve in the warmth of a loving family. Perhaps if she’d been somewhat older and more experienced (in the world, not sexually) she would have been more astute in her perceptions.

I loved this biography. I read it in the midst of a huge glom of research (for fun) into the Cavendishes/Spencers/Bessboroughs.

I ADORE Hary-O’s (Georgiana’s daughter) letters. I’ve three volumes – including the one that ends with her engagement to Granville. Most of them are to her sister, Little G, and just great.

I also recommend Lady Bessborough and her family circle – a collection of letters among Harriet Bessborough’s family members (Georgiana’s sister).

I also read the biography of Georgiana’s son – The Bachelor Duke – the biographer did not always ask the questions I wish he would – but still fun.

Actually, all my Cavendish/Spencer reading inspired me to go see some of the houses mentioned in the letters and biographies – e.g. Chatsworth, Castle Howard, and the Cavendish House in the lake country last fall. I’d already seen Icworth House (Lady Bess’s father’s “folly”) So fun.

It does seem like almost every woman in the book is named Harriet, Caroline or Georgiana, doesn’t it?

I was once in a production of A Man for All Seasons, and we realized that all the male characters (with one exception) where named Tom, Dick, or Harry. (There were five, count ’em, five characters all named Thomas.)