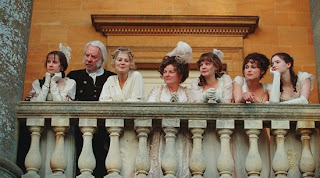 On my trip back to England last week to visit the old man who is not a tree (renamed the Retired Admiral because of his luxuriant white beard) I also visited Basildon Park near Reading. It’s the house that was used as Netherfield in the 2005 Pride & Prejudice.

The house was designed by architect John Carr for a rich nabob, Francis Sykes–apparently Berkshire, close to London, was a favorite retirement spot for those who had made their fortunes in India. It changed hands several times for the next century and a half, narrowly escaping demolition and development in the early twentieth century. At one point it was offered to the American market, as a house to be dismantled and erected across the Atlantic, but 1929 probably wasn’t the best year for such an offer. The house was taken over by the military during World War II. Consequently it was fairly messed up when Lord and Lady Iliffe acquired it in 1951 and set to restoring it. You can see what a beautiful house it now is by checking out the photo gallery (copyrighted material so I’m leaving it alone). 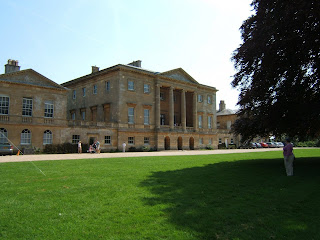 Here’s the outside of the house. I’m lurking in the shade under the tree (and my brother forgot to set the butt filter, as you can see).

There’s a whole exhibit dedicated to what they had to do to prepare the house for filming P&P–fragile carpets were rolled and removed from the first (that’s second to you Americans) floor by forklift and great pains were taken to protect the house’s delicate features. The furniture was made specially for the movie.

So how authentic is the house inside? I was a bit disappointed, to be honest. Lady Iliffe, who we heard a lot about–she died only a year or so ago, and lived on the premises while the National Trust maintained the house–decorated the house to her taste. Altogether it’s a bit of a mish-mash of style. The Oxagon Drawing Room, for instance, has a Victorian ceiling, and Lady Iliffe, with the help of her cook, lined the walls with red felt to show off her paintings better–and of course colors like Pompeian red would have been very fashionable. But underneath the red felt is the blue green color that Georgians also loved. To give her credit, Lady Iliffe plundered other houses designed by Carr, going on expeditions to Yorkshire, where most of his work is, and loading a truck with doors and fireplaces. 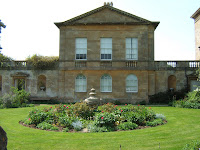 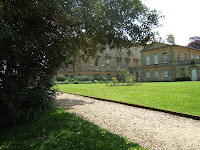 Here are some more views of the exterior. As you can see it was a gorgeous sunny day. 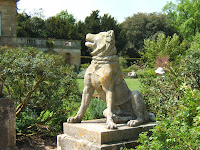 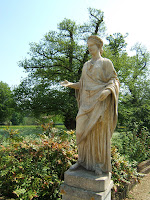 The statues are of Alcibiades’s dog, and, according to my brother, the goddess of leprosy.

Naturally after a stroll through the house and garden we had to have afternoon tea. I had Victoria sponge and my brother had chocolate cake. That’s my arm in the pic. My brother was also very anxious that his shot of the toilets be included (in the stable block) so here they are. 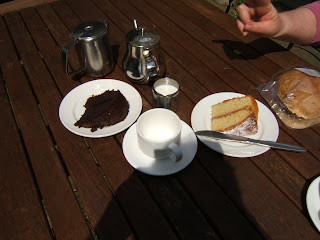 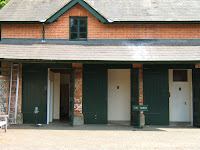 And what else did I do over there? I’m happy to announce that I did get to Sir John Soane’s Museum–cleaning that place must be a nightmare–met with my editor, took a tour of Shakespeare’s Globe and saw part of a rehearsal of Midsummer Night’s Dream, and visited St. Paul’s where Wellington is buried, and heard the choir at Evensong. We also had a trip to Bristol, one of my favorite places.

What have you been doing this week?

I’m blogging today at the Wet Noodle Posse on how to research historical costume–come on over and take a look!

This week, I’ve been wishing that Southern California would pick one temperature and stick with it!

In the past few weeks it’s been everywhere from the upper 30s (F) to the 90s… My poor plants have no idea whether to die, flower, or dig in for winter…

I have been here in the Hudson Valley. However, your mention of Basildon Park being on the market at one time for a trans-Atlantic move put in mind our own Bannerman’s Castle. It’s all but abandoned now but it’s got a great story around it and would make an even better romance….

Santa
Who really should be concentrating on finishing one thing before starting something else.

Right now I am jealous over your trip England and drooling over your photos. Before that I have been working my tail off picking up the slack for my bakery being down a cake decorator. Can I just say I hate Dora the Explorer? I have had to do that cake ten times this week! Grrrr!

Trying very hard to get in 5 pages a day and not always succeeding.

The pics of the house are fabulous! I love touring those old places. (An irony–my mother used to drag me through old houses when I was a kid, and now I do it to myself.)

My week has been moderately full, if not exciting. It’s Commencement Week for us, so–picking up regalia; hooding ceremony; a student’s thesis defense; Commencement Marshal rehearsal; and (tomorrow) the big event, with all the pomp and circumstance (not to mention Pomp and Circumstance).

Plus, for extra fun, dealing with a handful of international students who suddenly realized that their visas were going to expire in a few days and that they might need to do something about that before they get deported.

Love those Basildon Park pictures. Would love to see it someday!

Sympathies on Dora, Pam, but at least you only had to look at her. For several years I had to live with Barney and the Care Bears and those voices used to drive me crazy!

As for me, this week I’ve been madly writing. School is ending all too soon…

Barney? NOOOOOoooooo! You have my DEEPEST sympathy, Elena! My niece LOVED that big fat purple dinosaur! I cannot tell you how many hours I spent watching Barney videos to get her to go to sleep!