Amanda is attending her brother’s wedding today so I volunteered to blog for her. I hope she’ll show us photos of her dress, but until then, let’s talk about Regency weddings.

Regency brides did wear white, but they didn’t have to. In the Regency, white gowns were popular for many occasions. Other colors like pale pink and blue were also worn at weddings. 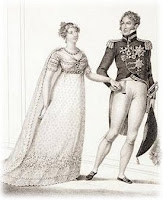 The older the bride, the darker the color. Wedding dresses were worn after the wedding, too. By the time Queen Victoria became a bride and wore white, the white wedding dress was well on its way to becoming a tradition.

Princess Charlotte, who wed Prince Leopold in 1816, wore a dress of silver lamé, embroidered in silver.

1. Weddings could take place after reading of the Banns, a license, or a special license. Banns must be read for three consecutive Sundays in the parishes of both the prospective bride and groom. A license, purchased from the bishop of the diocese, did away with the banns but the couple still had to be married in the parish church. A special license, purchased from the Archbishop of Canterbury, allowed the couple to be married in a location other than a church and without banns. Licenses were never blank; different names could not be substituted.

3. Weddings could not be performed by proxy. Both the bride and groom had to be present.

4. Ship captains could not perform marriages. Couples could be married aboard ship, but only by clergy. (How many times have you read that plot?)

5. Brides had wedding rings; grooms did not. The bride could give the groom a ring as a wedding gift, but it was not part of the ceremony and didn’t symbolize he was married.

Do you want a Regency Wedding? There are many sites on the internet offering custom made Regency wedding dresses:

Or if you are handy, like Cara, you could make your Regency gown:

I was married a Brazillion years ago, before a bride would even DREAM of a strapless gown. Before I married, I’d never read Georgette Heyer or Regency Romances and it had been a few years since I’d read Jane Austen. 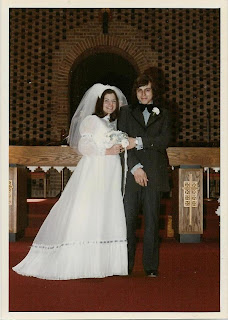 Take a look at my wedding dress.
It’s a little hard to tell here, but it has an empire waist. It’s a Regency Dress!

Do you have any questions about Regency weddings?

Did anyone else have a Regency wedding dress?

And while you are blogging on Monday, stop by The Wet Noodle Posse. My friend Darlene Gardner is blogging about researching character occupations.

Diane, you are very beautiful in your ‘Regency’ wedding gown!!! It does look very much like a real Regency dress.

I don’t think I’d want to be married in a Regency theme for one reason-men with no wedding bands! Akk! But, I have seen real gowns in museums to know that those gowns are indeed really lovely.

I’m not married yet, so I can’t say anything of ever having a wedding gown! 🙂

Mallory, it is WONDERFUL to have you back!! We’ve missed your comments.

Thank you for the compliment. I was (sigh)young!!!

I tend to watch Wedding TV shows, like Whose Wedding is It Anyway and the strapless gown is definitely the favorite. I wonder if I would have picked it over my regency gown. It was the first gown I tried on and I knew it was the one!

If you’d decide on a regency wedding, Mallory, I think you could fudge the wedding band part.

Amanda here, just popping in as I recover from the rehearsal party last night! I would definitely like to have a Regency-style gown (love yours, Diane! Too bad your husband wouldn’t wear a Beau Brummell-style suit, LOL). My soon-to-be SOL went for a strapless white lace, but I would want something more historic-looking.

Also, I was doing some research on Bath exteriors online last week, and came across a site listing sites in England open for weddings! Syon was one, and Marble House. Also Hever Castle, which I think I might go for someday… 🙂

When I got married, neither I nor my wife wore a Regency gown. I wore a charcoal morning coat, which practically reduced me to charcoal after standing in the Southern California sun for a while. 🙂 Cara wore a…well, it was a kind of a…well, a wedding dress of some sort. Maybe she can describe it more accurately. 🙂

We did have our wedding at a historic house, though not in England–we were married in the gardens of Orcutt Ranch Park, which was the vacation home of a wealthy man in the 1920s, and was donated to the City of Los Angeles as a park after his death. Very pretty!

But Todd I’ll bet you would have looked lovely in a muslin skirt.

As I understand it the Regency ton thought public marriage ceremonies vulgar and preferred private ceremonies by special licenses.

Christenings were the big deal.

I didn’t have a wedding gown either time but my second wedding was cool–it was in our house with 50 guests squished into our living room and an ‘open mic’ where people read poems. We also had live music (we were some of the musicians) and my husband did his encore piece–playing two recorders out of his nose.

Love that pic, Diane! You both look so gorgeous there…and so happy! Great picture.

And thanks for the compliment about me being handy…when I’m only a little bit! (Gathers hide a multitude of sewing sins, and iron-in-seams save tons of work — though if you later regret the seam, you’re stuck!)

As for Regency weddings, I attended a friend’s wedding where the bridesmaids were in Regency dress. (Or perhaps I’m remembering wrong — anyway, one of my friends was certainly in Regency dress, but she was one of the groom’s attendants, so perhaps she was the only one…my memory is terrible!) 🙂

BTW, as for the strapless gown thing, I think most of them aren’t to my taste. The bodices look so hard and unnatural, and there are so few nice ways to stand in them that even some of the professional pics in bride magazines look unflattering, IMHO… (I know I’m in the minority on this one, as they’re hugely popular…)

Todd, did you realize we couldn’ve been wed at Syon or Marble Hill House? Silly us!

Todd wrote: Cara wore a…well, it was a kind of a…well, a wedding dress of some sort. Maybe she can describe it more accurately. 🙂

It was what they called a ballgown, I think — sort of a Victorian style dress, with a fitted bodice and a very full skirt. Definitely more my style than either Regency (which doesn’t flatter my curves) or strapless (wrong line for me.)

Cara, your dress sounds lovely! But, I’m sorry, nothing can top Janet’s husband playing two recorders out of his nose. What was the song, Janet? “I Love You Truly?” or “Love is A Many Splendored Thing”?

You were a beautiful bride, O Divine One!

I too wore the first gown I tried on when I was wedding dress shopping. It was a very Cinderella type ball gown with a very long train. And yes, I too was young. Sigh!

Wow, Amanda, what gorgeous sites for a wedding. Roger and I got married in the chapel of Judson College, where I got my bachelors degree. It is in a beautiful old antebellum hall with double sweeping staircases leading from the chapel to the marble-floored foyer and then on to the formal parlors where my reception was held. The main reason I chose it was because it had to best Flentrop organ in the country at the time and my organist, with whom I went to college, was phenomenal!

I have a pattern for a Regency gown and I am very tempted to make it for the evening of the Beau Monde conference before Nationals. We’ll see! Cara, you are so right about gathers hiding a multitude of sins!

But Todd I’ll bet you would have looked lovely in a muslin skirt.

It would have shown off my elegant figure to perfection. But we can’t have everything.

Todd, did you realize we couldn’ve been wed at Syon or Marble Hill House? Silly us!

Darn it! Well, the next time we get married, we’ll rent Windsor Castle. And just think, we’ll get a whole new set of kitchen appliances!

Ohmigosh, the pair of you are TOO cute! Your husband looks like he absolutely adores you.

We were so young, janegeorge. And thin. The wedding day was a blur, but a fun day.

O Doggie One, did you feel like you knew “the dress” as soon as you saw it on the rack? I did. My sister, too, bought the first dress she tried on. Her dress was nothing like mine, much more elegant and modern. Instead of a veil, she had this gorgeous turban. I loved it, but would never have worn it myself.

Todd I’m sure you looked very handsome in your charcoal morning coat. Not as attention-getting as a gown, but nice anyway

“I have a pattern for a Regency gown and I am very tempted to make it for the evening of the Beau Monde conference before Nationals.”

I definitely think you should!! I love seeing everyone’s costumes there. 🙂

The wedding was very, very nice. Everyone looked great, the food was delicious, and there was dancing. Now she’s stuck with him, LOL.

Diane, what a lovely pic to share with us!

I did not have a Regency wedding–when we married I was into reading Regency but not yet writing. Though the idea of going more Regency appeals to me now, we already had a lot of cultural influences. We had a sax player riffing on Hava Nagila and at the end, my cousin playing Lithuanian kankles while they took off my veil and put on a babushka. Adding a Regency element would have taken it waaayyy over the top.

Cara, I like how strapless gowns look on some people but never tried one myself. I was always too chicken that I might wave at someone and have something else waving besides my hand…

Janet, your wedding sounds so cool!