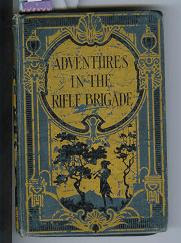 I love new books: the pristine covers, unbroken spines, the sense of anticipation, especially when a friend’s name adorns the cover. But I also love old books, whether novels or reference. I have a bunch at home and regularly check more of them out of the local university library. I’ve found that newer books, while they may contain new information and insights, don’t always have the period focus I like. For instance, I recently found a Victorian history of ballooning which covers the Regency period in much more detail than most modern books on the subject have space for. 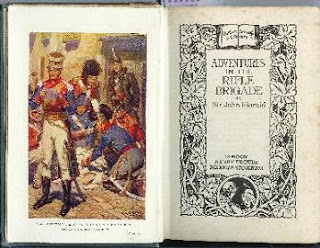 I also love old books for less logical reasons. I love their embossed covers, their yellowed pages, the titles that seem to go on and on. I love the fonts, even the ones in which s’s look like f’s. I even love how they smell. They make me wonder where they’ve been and who read them before me.

And a new love is Google Books. Being a certifiable history geek, I am delighted to find treasures that would otherwise remain semi-hidden in special collections in places I don’t have the time or money to visit regularly. Even though I miss the smell and feel, I love to find obscure gems like: 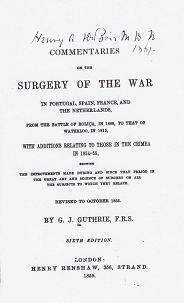 Commentaries on the Surgery of the War in Portugal, Spain, France and the Netherlands, from the Battle of Rolica, in 1806, to that of Waterloo, in 1815, by G. J. Guthrie, 1855. Full of details on how military heroes and their compatriots could have been wounded and what could have been done for them. Gory but useful. 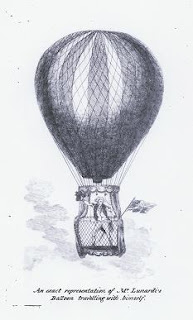 An Account of Five Aerial Voyages in Scotland by Vincent Lunardi, 1786. It’s full of the period ballooning details I need. Lunardi seems to have been quite the charmer:

“In going to the Baronet’s we had to cross over the bridge at Glassart, where about thirty young blooming lasses had ranged themselves on each side to have a sight of this comely Adventurer. All of them appeared well pleased: there was one, however, not the least lovely of the number, whose sensibility led her to express herself more strongly than the rest: ‘How pretty he is! I wish I had been with him.’ Mr. Lunardi was too attentive to let slip an opportunity to say a civil thing to our fair Countrywoman: he patted her cheek, whispering, ‘My Angel, and so do I.'”

How about you? Do you love old books, too? Have you found any obscure gems on Google books or elsewhere? Please share!

There are some very interesting Regency-era dance books I’ve studied on google books….but I have a lot more browsing to do!

Long may it remain free…

One of the things I love about Google books is the ability to search on key words.

Let me know if you figure out how to copy from them O Divine One! There is so much there I would love to have at my fingertips in a hard copy!

I love old books, too! They make me feel like I have a physical connection to the past, both to the people who wrote those books and the people who read them. For me, though, Google Books and other online sources are the way of the future. There are a comparative handful of university libraries that have copies of truly old books; the books themselves are delicate and need careful handling, and often can’t be taken out of the library. Scanning makes these books available to people everywhere!

I haven’t spent much time exploring Google books itself, though I’ve gotten one or two things there. There are some other sources, though, that I have found many cool things in. One is a database containing scanned-in versions of a vast number of 18th century English-language books. (This is unfortunately not freely available–I have access through my university library account.) I found The Soldier’s Companion from 1800, The Fine Gentleman: or, the Compleat Education of a Young Nobleman from 1736, and Clara Reeve’s Plan of Education from the late 18th century (about women’s education).

There is also an odd miscellany of texts available on Project Gutenberg. They are well-stocked with the classics, but also have a curious variety of other books. I like these because you can download them as ASCII files or in Plucker format, readable on my Palm PDA. Not quite gilded leather, but very handy!

Long may it remain free…

Let me know if you figure out how to copy from them O Divine One! There is so much there I would love to have at my fingertips in a hard copy!

Well, I am not the Divine One, but there are some answers to this. You can download the whole PDF file and then print individual pages as you wish.

You can also click on “View Plain Text” which will give you text which you can highlight and copy. This method isn’t so good though because there are often errors in the conversion from the page image to text.

Thank you, Elena! I will definitely try that!

Todd, I have to agree with you about the thrill of holding an old book in your hand. We are so lucky my Mom loved to prowl estate sales when we were stationed in England. She bought boxes of old books and while some were less than stellar items, some were real treasures.

There is something about seeing them on the shelf, picking them up and touching them. In those days books were a work of art on the outside as well as the inside!

I love old books too. I love the cracked spines and the illustrations, and just knowing how old the book or magazine I hold in my hand is. But I also love Google Books because without it I would be writing from the cardboard box I was now living in, having spent all my money on books. And strappy sandals.

I love Google Books as a concept, but somehow I haven’t been able to figure out how to search with it well enough yet to make good use of it in my work. E.g. a few months ago I was looking for farming manuals published between 1780 and 1804, and it kept returning books from well outside the date range. Other times I’ve had trouble getting it to give me the topic I’m looking for. Do any of you know of any useful how-tos? I’m normally good with search engines–at work I’m known as the one who can find anything online–so I don’t know why this one isn’t working for me.

Susan, I haven’t found any special tricks for searching Google Books either. The way I’ve used it so far is in searching out obscure titles I’ve seen in bibliographies of more readily available books. What a nerd I am–I love bibliographies! 🙂