A bit of everything

First off, some news. The Rules of Gentility won the 2008 HOLT Award for Best Romantic Comedy, woohoo! I have a lovely silver wotsit that I think would look cool on the xmas tree.

Next is that I have sold a novella for an anthology tentatively titled Bespelling Jane, paranormal takes on Jane Austen, with the following Big Girls: Mary Balogh, Susan Krinard, and Colleen Gleason! All I know at the moment is that it will be published by Harlequin sometime in the future, and mine is a contemporary take on Emma. Since I haven’t written it yet, I can’t tell you a whole lot more… 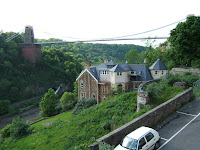 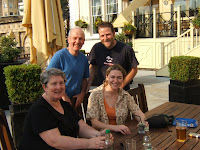 Here are some pics of my visit to England a couple of weeks ago, me with my brother Martin, my nephew Tom and his lovely girlfriend Sam, at a pub overlooking the Avon Gorge and Brunel’s famous Clifton suspension bridge.

And I wondered what everyone was reading these days. I’ve just read two superb books. Mistress of the Art of Death by Ariana Franklin is about a female forensic doctor, set in twelfth century England. Yes, it sounds unlikely but it’s so well done I had very few come on! moments. (Sorry, I still don’t believe that there was a Body Farm in Sicily using pig carcasses when most of the doctors were Jewish.) It’s beautifully written, and the dialogue is amazing–the characters don’t speak in pseudo-medieval talk, but Franklin captures both a believable local dialect and the speech of churchmen and crusaders.

The other one is Saturday by Ian McEwan (who wrote Atonement), about one day–on the eve of the Iraq invasion–in the life of a surgeon and his family. His son is a blues musician and his daughter Daisy a poet, and I liked this passage, which defines the achievement of this wonderful book:

But is there a lifetime’s satisfaction in twelve bars of three obvious chords? Perhaps it’s one of those cases of a microcosm giving you the whole world. Like a Spode dinner plate. Or a single cell. Or, as Daisy says, like a Jane Austen novel.

What have you read and enjoyed recently?

Congratulations Janet on both the Holt Medallion and the anthology. I look forward to reading it when it comes out. As for what I’m reading now, I’m immersed in non-fiction for my Scandalous Women blog. Right now I’m reading Inside Peyton Place about Grace Metalious and I’m also reading Mrs. Keppel and her daughter. I did devour Michele Martinez’s latest legal thriller in one night last week.

Congrats on the Holt award! I loved ‘Rules of Gentility’. As a matter of fact, I feel a re-read coming on. I’ve been working on getting my TBR pile down and am almost there. I have been enjoying my Jane Austen books like ‘Mr. Darcy’s Daughters’ and ‘Me and Mr. Darcy’. So, your novella fits right in there.

As a matter of fact, I am so immersed in Jane Austen-escque books that I wrote a blog about them and Manga books for my guest stint tomorrow over at Romance Writers Revenge. Hope you guys can pop over. It should be fun.

Congrats on the Holt award, Janet. I’m an Agatha Christie fan and some people recently recommended that I give Dorothy Sayers a try. I’m busy trying to pick up some of her books.

I just finished Romancing the Dead by Tate Hallaway.

A huge, well-deserved Congratulations on the Holt Medallion.

Big congratulations on the Holt and on the novella sale!

As for what I’ve read lately, GEORGIANA was the best but I’ve talked about that already. 🙂

Congratulations on the Holt Medallion! Everyone needs a little silver wotsit in their life! And well deserved too as I loved Rules of Gentility!

Actually I just finished The Privateer by Dawn MacTavish. My CP recommended it. It was a great read and the author really did her research.

Thanks for the congrats everyone!
Jane, I hope you love Dorothy Sayers. I think this is a series that should be read in order so you can appreciate the slow burn between Wimsey and Vane–and the last one (bar a short story or two), Gaudy Night, is just amazing. Great stuff. I feel the need coming on to re-read…

I already said private congratulations on both your lovely achievements. I can hardly wait for that anthology.

And SIGH on your England trip.

I’m reading nothing at the moment…I’m trying to meet my deadline.

Congratulations on the Holt win!
The pics from Clifton made me homesick…when we lived there we drank at that same pub. Such a lovely time of year to gaze upon the Avon Gorge!

Margaret, the weather was fabulous–80 and sunny, while back home in Washington DC there were torrential rains and floods and power outages.
Lucky you living in Bristol–it’s one of my favorite cities.

Congratulations on the award — I’m very much in favor of sparkly things of the sort that can be hung on the xmas tree or one’s body.

As for current reading, I read “Mistress of the Art of Death” and “Saturday” and very much liked them both. I’ve got the sequel to Mistress in my TBR pile and hope to get to it in the not-to-distant future. Diana Norman rarely disappoints.

As for recommendations, I’ve been telling everyone (even convinced my book club) to read Markus Zukas “The Book Thief”. A wonderful, poignant, touching, funny book narrated by Death. Zukas creates such vivid characters (including the narrator), yet he treats them so tenderly they never come off as over the top or cartoonish. Definitely worth reading.

Belated congrats x2, Janet! (I’ve been away for most of the week…)

BTW, Susan/DC, the Zusak is on my TBR bookcase! (Though, as it IS a bookcase, who knows how long till I read it…) 🙂