I have been talking about getting a cat for a while now… Probably a little kitten, who will be a perfect angel and never miss the litter box, and who’ll do the dishes without being reminded and all that other perfect kitten stuff.

And after saying “we should really get a kitten soon” for quite a while, we finally have a date: next weekend.

As it has been several years now, we are surely over the death of our last perfect kitty. He, too, never missed the litter box, could play the complete works of Shakespeare on the piano, and would have done the dishes without a reminder had he only possessed thumbs and the ability to understand English.

(And just to prove how unbiased I am, I will now reveal the fact that one of my sainted cat’s previous housemates referred to him as S.O.S., short for “Spawn of Satan.” Just another example of how not everyone loves Shakespeare.) 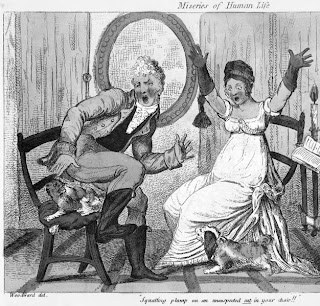 With all this cat cogitation going on, I’ve been thinking about cats during the Regency.

Because they certainly had cats. They even had spoiled little pet cats, like my perfect kitten will be. (Though I suspect that Regency kittens played Mrs. Radcliffe on their pianofortes, and helped with painting fire screens.)

There have been plenty of kittens in Regencies — particularly Regency novellas, which (if you think about it) are already kitten-sized. But I’ve done little actual research into the lives of perfect Regency cats.

And I’ve always wondered what they did for litter-boxes. With no clumping litter, did they bother? Did they just make the cat go outside? 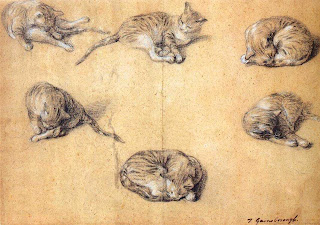 (By the way, I just thought I should mention that my sainted ex-kitty always refused to play that “thrice the brindled cat hath mewed” part on the piano. I think he didn’t understand that brindled merely meant tabby — which he was, complete with the “M” on his forehead which stood for Multitudes of Mischief — but instead thought that brindled was some sort of slur against cats, perhaps one meaning “refuses to do the dishes until he’s allowed to finish off all the ice cream.”)

Oh, and if you have any cat information, either Regency or nowadays, please share!

And be sure to stop by next Tuesday, when we will be discussing the movie Clueless!

Cara
Cara King, who can only play Cymbeline on the kazoo

There were duplicate Janet posts…

Cara, you don’t want a kitten, you want me to send you one of our cats:
1. Invalid cat – must be carried to the litter box twice a day or she’ll go in the food dish.
2. Devil Cat – has terrorized Invalid Cat so that she’s afraid to go to the litter box on her own, is prone to urinary infections.
3. Tuxedo Cat (Domestic Medium Hair, black and white) – occasionally throws up hairballs, occasionally meaning once a week…or more.
4. Brooklyn Cat – has never been outside but he has NY/Brooklyn genes. Loves to play in trash cans; balances on the edge of the litter box, but sometimes faces the wrong way.
5. California Cat – scheduled to come visit while son does a five week archeology course at a dig in New Mexico – born in CA and has that laid back temperament. Likes to eat a lot, but is skinny. Needs a pill every day.

Such a tough choice, Diane! I’ll have to ask the piano.

Janet, I believe in aiming high — too many modern parents are content with cats who take one or two violin lessons and then can’t be bothered to practice…and in a few decades, where will the world be?

Great post, Cara! Gee, O Divine One, I thought I was the only one who took in the weird cats! You have me beat! I have one deaf cat (19 pounds) who has the loudest, strangest meow you have ever heard! His brother, a yellow marmalade (17 pounds) can hear, but has no meow to speak of at all. His mouth opens, but no sound comes out. Black manx, Bagheera (24 pounds) was declawed on all four feet by some idiot owner and even dumber veterinarian. He’s the whiner. His litter box isn’t spotless? He comes to me and whines. His food dish is empty (he IS on a diet.) He comes to me and whines. His water dish is less than half full? He comes to me and whines. One of the other cats has his toy? Get the picture. And God forbid one of the dogs bothers him. I get a one hour cat lecture on how ALL dogs belong in the yard!

Then my six pound tiger tabby, Rebecca, has to be on special food because she won’t gain weight without it. Three on a low fat diet, one a high fat diet and three dogs who would really love to eat the cat food if they could.

The litter box question in the Regency is an interesting one. Anyone have any idea where I might find that sort of information?

It is a difficult thing–our last kitty was soooo perfect, that getting another one seems to be inviting disappointment. Of course, I may be forgetting a few of his faults…his very, very few faults…like, begging for food all the time, and eating ribbons and string and rubber bands and yarn, and…well, you get the idea.

And there was that time he stepped on my head in the middle of the night and tried to sink his claws in when I woke up and moved away. But aside from little things like that, he was completely perfect!

All I truly know about cats is that all one does is eat and sleep. Well, my particular one ,anyway. Figure that transcends time, regardless of period. 😉

I would also like to know the answer to the litter box question, if anyone finds out! 🙂

Wow, Diane, now I feel very lucky to have my 2 relatively normal, easygoing cats! They mostly sleep on the bed, eat, play with their crinkly toys, and avoid the dogs (especially the visiting puppy). But one of them does go nutso whenever there’s a full moon…

If one of the cats condescends to sit on my lap and purr, it makes it all worth it.

Cara, I think it is a good idea to get a kitten that has been born and reared in a family home, or otherwise with lots of human contact. According to my vet, there is a critical time for socialization – around 4 or 5 weeks, I think. I’ve had cats who have obviously missed that crucial developmental stage.

My sainted ex kitty was a stray, but was abandoned extremely young (well before the 4/5 weeks you cite) and was then raised by humans, and he was very friendly. Though it’s always interesting to see which part is instinct and which part is learned behavior in cats — when my cat grew out of kittenhood, he suddenly developed certain fears — which I figure were lurking in his genes all along!

Full moon, Amanda? That’s one unusual cat. Do its teeth grow extra long then too or something? 🙂

Lois, I suspect the cat in the second picture I posted was busy doing your cat activity #2 (sleeping) when that rude gentleman sat on him. (After which the cat was thinking, dude, get your own chair!)

Wow, Doglady, one of your cats is four times the weight of one of the others? That’s impressive. Do they play together at all?

Cara, I’m also clueless on the litterbox issue. Add me to the list of inquiring minds who’d like to know.

Wishing you the best of luck in finding a talented kitten. Alas, I have never heard our goldfish play anything at all…

The answer to the Regency litter box question might be here:

I don’t have time to look. Am actually writing today!!!

Thanks for the link, Diane! They have little info pre-mid 19th century, but this is from something published late 19th century:

“As soon as the kittens are about a month old, a shallow tin of dry earth or ashes (I do not recommend sawdust) should be provided for them, and it will well repay their owners to spend some portion of the day with the little ones and lift them into the earth-pan when necessary. If this is done two or three times, the lesson is probably learnt for life. Kittens are naturally clean, and will get out of their beds, and run about crying loudly for some accommodation for their wants; and if this neglected the seeds of dirty habits are sown, and the poor untaught little ones reap a sad harvest of cuffs and sometimes kicks from servants, who naturally dislike the trouble caused by dirty house pets.”

Yay. A Victorian litter box! I’d wager that the idea for this came a lot earlier in history.

Now all we need is a supply of Victorian litter!

Were cats more work animals during the Regency than pets? My grandmother (who is not old enough to remember the Regency, but is closer to it than anyone I know)detests the idea of indoor cats, because of the cat’s image in her eyes as a mouser, and since mice weren’t clean…

From someone whose cat has played T.S. Eliot on the Stereo

whose cat has played T.S. Eliot on the Stereo

Ooh, that’s a high-class cat. Or maybe he’s a Jellicle cat himself?

As for the Regency, I’m sure most cats were working cats, hanging out in barns and eating mice and the like, but I know there were some overindulged pet cats (like in the caricatures)….though I suspect that even then, they were often looked down on (though actually, I suspect the same was true for a small, nonworking pet dog!)

Was your grandmother from a farm, by any chance? I think all farm cats worked. (Well, everyone on a farm worked, including kids! Or so folks tell me. So glad I don’t live on a farm. I hate working! That’s why I’m a writer, of course.) 🙂

Or perhaps it’s just a grandmother thing. My grandmother didn’t think kids should read too much, and she was horrified once to see me sewing without a thimble. (Then again, she always wanted to feed me as much wonderful food as possible, and she let me watch as much TV as I wanted, so I’m totally not saying she was harsh! But she did have a few grandmother-ish opinions…) 😉