Those two words, plus Let’s Pretend… are part of the essential writer’s toolbox (or those of the average six-year-old, meaning that writers haven’t quite grown up yet).

So I like to play a game where I try to translate everyday life into the Regency, partly to amuse myself and partly as research or background building. Take getting up in the morning, for instance. Now my routine is pretty simple. I can get myself up and out of the house (usually with clothes on the right way out and right way around although there have been notorious lapses), with time to check e-mail, in about forty-five minutes. 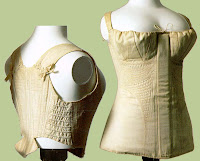 But in the Regency… first I’d need someone to lace me into my stays, unless I was fortunate enough to own a pair of front lacing stays (at left)–rare in collections, but they did exist. And chances are there would be people around, because people did not live alone, and I’d have a servant or someone to help. In fact there might be rather too many people around. Let us pass over the bathroom issue, but assume some washing might well take place.

Choosing something to wear would probably be quite easy because either I’d opt for morning dress (i.e., slopping around the house wear), or I’d put on the clothes I wore yesterday and every other day except Sunday. 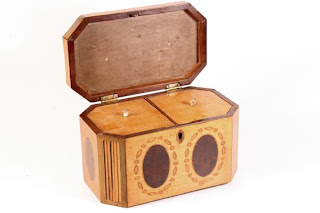 Next, the urgent need for a cup of tea. If I was unlucky the fire might have gone out, although I hope I would not have been so slatternly as to forget to bank it the night before. I might have to pump water. If I had someone to boil the water I’d still be the one to make the tea because I’d have the all-important tea caddy and its key. Someone would also have to look out in the street for the milkmaid and her cow so I could have milk in my tea. 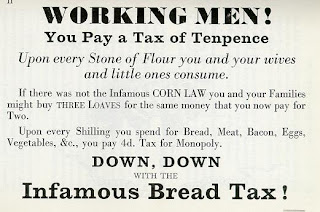 As for breakfast itself–assuming there was anything to eat in the house with the price of bread at an all-time shocking high–if I were higher up the social scale I’d have toast or cake. All more labor intensive than you might think, certainly more fiddly than putting an English muffin (yes, there were things called muffins in England, but the English muffin is neither English nor a muffin) in the toaster. No peanut butter either.

I suppose the equivalent of e-mail would be reading a newspaper (although possibly several days old, passed on by someone I knew) or receiving the day’s post.

And leaving the house for work?–chances are I’d stay home doing piecework, and trying to keep my grandchildren out of the fireplace (note to daughter: this is not a hint). Or I’d leave to clean someone else’s house.

Maybe you can explain the English muffin thing, Janet: I’ve heard all my life that English muffins aren’t English, but when I lived in England, you could buy a pack of things called “muffins” in the store that were almost exactly like our “English muffins.”

So: how are English muffins not English?

I know I would miss modern toilets and bathrooms the most, and things like showers and shampoo and conditioner.

I’m absolutely convinced that I must have been a scullery maid in a former life. It is the only household chore I accomplish with any skill. I suppose I had to wake up before Cook and I probably had a little cot near the scullery.

I, too would miss indoor plumbing the most. I think I would enjoy having scones for breakfast or tea.

Besides modern plumbing, I would miss good eyecare and medications, since I know I would have been left somewhere a long time ago, considering how blind and wheezy I can be.

I would like the parties and the lack of guilt at doing anything but piecework and chatting. Plus eating what meager veggies I did with loads of butter, I would like that.

I would miss peanut butter a lot, too, since I eat it nearly every day.

Modern facilities definitely. In fact I am missing some now as my ancient hot water heater has sprung a leak and I am waiting for the part to fix it. (Yes, I do my own plumbing!) My brother said (scratching his own butt. I can hear this over the phone.) “You need to get a new one, Sister.” To which I reply “I’m not getting anything new until after Nationals!” That is my new mantra!

I am trying to decide if I would be a pastry chef in a grand house. Hard work, but plenty of food, I would think. I can scream in French with the best of them.

Or would I want to be an opera singer and have to be the mistress of some rake or scoundrel to make ends meet. Hmmm. Depends on what the rake looks like. I wonder…..

Oh, and ladies, and most especially the Divine Ms. Gaston, I got a call from Stephi at RWA. One of the final editor judges requested the full of LOST IN LOVE!!!!!! SQUEEEEEEE! EEEEEEEK! And much nail biting here. I did zip the newest revised version of it off to her postehaste. All 360 pages of it. Yes, I know. I probably need to revise it some more. Does this make me a PRO? Or do I have to wait for the rejection? LOL

And as for PRO, it’s my understanding that you don’t have to wait for acceptance or rejection to join if you either have proof of mailing, or a receipt postcard from the publisher, or something like that…

Oh, and ladies, and most especially the Divine Ms. Gaston, I got a call from Stephi at RWA. One of the final editor judges requested the full of LOST IN LOVE!!!!!!

OMIGOSH OMIGOSH OMIGOSH! O Doggie One, I am not surprised and I am certainly keeping all digits crossed. This is sooooo wonderfully exciting!!!!

I suppose I had to wake up before Cook and I probably had a little cot near the scullery.

Up at five on your hands and knees scrubbing anything that didn’t move, Diane!

Jane, I’d dearly like to find out the truth about scones for breakfast or tea in the Regency. I’ve always understood them to be Scottish poverty food that became popular when Queen Victoria went gaga over all things Scottish, to be served at teatime.

Congrats on the request for a full, doglady!!!

Many congratulations on the request for your manuscript, Doglady! Fingers crossed! I remember how much anxious waiting is involved in that, from watching Cara. 🙂

I’m with everyone who said they’d miss modern medicine and dentistry. Other than that, I think if I had enough servants I wouldn’t miss the modern conveniences. But who am I kidding? I’d probably be a hardworking farmwife, milking the cows or whatever. At least the scenery would be gorgeous. 🙂