Christmas in June, and Haydn Too!

I got a bit of good news last week. NAL is going to reissue my Christmas novella Upon a Midnight Clear in October! This first appeared in the Regency Christmas Magic anthology, and now gets new life along with 3 other random novellas (though I don’t know what they are). I am very excited about this, as UAMC was one of my favorite stories I did at Signet, the tale of an injured Naval captain and a reclusive Jamaican woman who find love and new life together on a chilly Christmas in Cornwall.

I always really looked forward to the Signet Christmas anthologies. There’s just something cozy and fun about Regency+Christmas! I get out my collection every holiday season and pile them up by the tree. Whenever the crazy season gets to me, I curl up with a cup of tea and an old favorite story. That sounds nice on a 90+ degree day like this one.

In other news, May 31 is the 199th anniversary of the death of composer Joseph Haydn (1732-1809). Though he was a native of Austria, and spent most of his career in the service of the Esterhazy family, following them as they moved from palace to palace, he did enjoy some very productive visits to England between 1791 and 1794.

In 1790, Haydn’s employer Prince Nicolas Esterhazy died and was succeeded by a thoroughly un-musical prince who fired the whole musical establishment and put Haydn out to pasture with a pension. Haydn was then able to accept a lucrative offer from Johann Salomon, a German impresario, to visit England and conduct new symphonies with a large orchestra.

These visits were a huge success, with audiences flocking to Haydn’s concerts. Charles Burney wrote of the first concert, “Haydn himself presided at the pianoforte; and the sight of that renowned composer so electrified the audience, as to excite an attention and a pleasure superior to any that had ever been caused by instrumental music in England.” 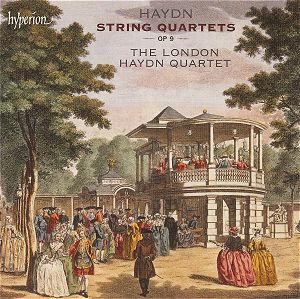 Haydn was also inspired to create some of his best-known works, such as the Surprise, Military, Drumroll, and (of course!) London symphonies, the Rider quartet, and the “Gypsy Rondo” piano trio.

So, in honor of Christmas coming early, what are some of your favorite holiday traditions? Or some favorite pieces of music (holiday or otherwise?)

So glad that novella’s being reprinted, Amanda! I did love it (especially with already knowing some of the characters from other books!)

I like most Christmas carols, and Signet’s Regency Christmas anthologies, and watching the Grinch and Rudolph and Charlie Brown on the TV…gosh, it’s weird to be talking about this in May! 🙂

BTW, I picked out a kitten this morning…a very cute red tabby. He can’t play the piano yet, but I’m sure he’ll learn in no time… (Though he may never be as good as Haydn.)

Yay new kitten! I’m sure his performances will soon “electrify the audience” 🙂

I also look forward to all the Christmas specials on TV, getting out the decorations that belonged to my grandparents and all the “travel” ones I’ve collected, and eating cake. But the cake isn’t confined to Christmas. 🙂 (It IS weird thinking about it all in the summer! But that’s what I had to do when I wrote the darned novella, since that’s when it was due. It wasn’t easy to get into the spirit of it all)

I love Christmas anthologies, too! The short length is perfect for the busy holiday season.

I was lucky to be writing my Christmas novella at Christmas time! I had no problem getting into it.

Thanks for the info on Haydn. Goes to show that getting riffed your job can be the best thing to happen to you.

“The short length is perfect for the busy holiday season.”

Exactly! 🙂 I have a hard time concentrating on reading anything long or complex in December, those stories are a perfect escape.

I always liked those Christmas collections! Both the novellas and the short stories. They were always favorites for reading aloud, too…good for invoking the Spirit of Christmas in Southern California, where it is often 80 degrees in December. 🙂

Actually, it now seems we will be adopting two kittens–a red tabby boy and a gray tabby girl. I’m sure they will soon be able to play all of Haydn’s pieces written for eight paws.

I loved that novella, too, Amanda!

Somewhere along the way, *all* of my Regency Christmas books got lost (I had a huge collection), but usually I would pull them out and drink lots of tea (with milk and sugar–look away, Cara!) and listen to my husband’s Christmas mixes. He has an equally huge collection of Christmas music, and does discs every year.

I love all my Christmas anthologies and am equally excited when I get my hands on a new one – new to me anyway. I get all mine out during the holiday season and read them from Thanksgiving to the Epiphany.

I also love to watch the old Christmas classics like ‘It’s A Wonderful Life’, all the Christmas Carol movies, all the White Christmas movies…

Congrats on the novella being reprinted, Amanda!

And congrats on the new kittens, Cara and Todd! With such parents how could they help but be outrageously talented. 🙂

Oh, no, Amanda, just when I thought I was safe from Christmas…congrats on the novella re-issue!

Oh, I loved those anthologies! 🙂 I love reading any Christmas themed book when December rolls around. I always have the new ones I got in that particular year, then go back to my past favorites. Although I guess in the past couple of years I’ve gotten more Contemporaries than Regency. But in either case, I prefer Christmas being sort of one of the major characters to the story, not just that’s the time of year it happens to be.

And awww, a kitty! Which reminds me that mine is staring at me for her treats, but then she’s been doing that for the past 30 some odd minutes. LOL

I’m back from vacationing in the wilds of North Carolina.

Such fabulous news, Ammanda. I’m very excited!!! I love Christmas novellas and longer and shorter stories. Gosh, Christmas has to be by far my favorite holiday, so anything to do with the holiday and a time period near and dear to my heart is at the top of my must-do list.

As far as my favorite classical music to listen to is Beethoven’s Ninth Symphony and to sing is Mozart’s Requiem Mass. I have the latter score memorized for all voice parts and instruments. 🙂 My current obsession is Norah Jones.