The last few weeks our neighborhood has enjoyed visits by a number of black bears, including a mother with three cubs. Here they are in the back yard of a friend who lives two houses down. Aren’t they cute!

Of course, my next door neighbors have taken in their bird feeders (which may have been what attracted the bears) and we’re all being careful about sending our kids out to play right now, but no one is seriously worried. Under normal circumstances, black bears aren’t aggressive. My family and I have had a few encounters with them while camping and each time they shambled away from us. Though obviously a mother with cubs should always be treated with caution! 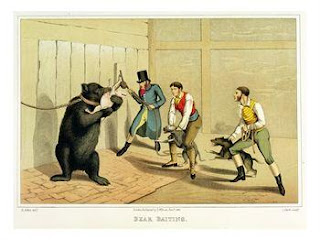 There haven’t been any wild bears in England since the Middle Ages. However, Regency folk might have seen captive bears in menageries or at various events. Bear baiting (tormenting a chained bear with dogs, etc…) was waning in popularity by the Regency. Many people had recognized by then what a degrading sport it was, however it was not made illegal until 1835. 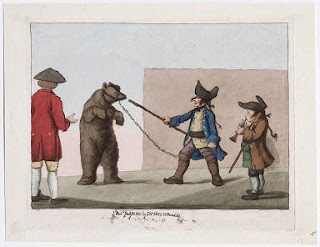 Regency folk might also have seen performing bears at fairs and such. Given that handlers were unlikely to be treated the bears in anything approaching a humane manner, I doubt it would have been entertaining to anyone like our heroes and heroines.

I don’t think I’ve read anything about bears in a Regency. One could perhaps imagine a hero or heroine freeing an abused bear, but that really could be way too Disney (there was just such a scene in the Pocahontas sequel). Though it could be amusing to picture the havoc caused by a bear running loose in some genteel locale, sadly I doubt it would end well for the poor bear.

I’m much happier just continuing to watch our woods for deer, wild turkeys and possibly more glimpses of these black bears (at a safe distance).
Have you had any interesting experiences with bears, real or fictional?
Elena
www.elenagreene.com
0 0 votes
Article Rating
Subscribe
Login

Interesting post Elena! I wonder what happened to all the bears? Did they die out? Move to another country?

I think bears became extinct in England through hunting, Elizabeth, either for sport or to protect livestock.

I absolutely adore polar bears because they are so well-designed, perfect white eating beasts who don’t bother fighting unless there’s a real (read: food) reason.

I have seen them at the zoo, and now because of global warming, grizzly bears and polar bears are mating, making for a grolar bear.

“The Pocahontas sequel”? Thus speaks someone with kids. 🙂

Janet’s right, the bears were hunted to extinction in Britain. Along with wolves, they were pretty much seen as a dangerous nuisance.

Grolar bears, Megan? I’d never heard of that before.

Yeah, Cara, I do see a lot of children’s movies. In fact, almost every Friday we do a Pizza & Video Night. Fortunately much of what we watch is actually very good. We recently watched “Night at the Museum” which was lots of fun.

Can’t think of a scene in a Regency Romance with a bear, but in one of the Aubrey/Maturin novels by Patrick O’Brian, Jack Aubrey escapes from France disguised as a dancing bear. (No kidding!) 🙂

And of course, there is the famous scene in The Winter’s Tale, with the stage direction “Exit pursued by a bear.” But that was set on the coast of Bohemia, so it all makes sense. 🙂

(Actually, in the production we were in last year, the exit-pursued-by-a-bear was done in a stylized way that was very cool.)

I saw a brown bear up close last summer when I was blissfully ashore at Lake Shasta. The bear looked very lean and hungry and I got back on the houseboat. Bears are cool. There are polar bears in the story I’m working on, it’s not a Regency!

Do teddy bears count? I collect them. I have on that was given to me the day I was born by my paternal grandfather. Bernie is one worn out well-traveled bear. He went to Germany with me when the DH could not.

The sun bears in our local zoo are big fans of butterscotch candy. I know a few of the zookeepers and they use the candy to get the bears in and out of their habitat when the weather turns ugly.

I have never actually seen a bear outside a zoo! (Except teddy bears, which I also have too many of, LOL). But I love reading about them, especially polar bears

Last month, we were visited by a black bear, a coyote, a bobcat, and a male deer: not all at once, but in broad daylight. They waltzed across the yard, pretty as you please, stopping to sniff here and there. My daughter and I pressed our noses to the glass admiring, while my husband ran for his camera. Though, sometimes I feel like I’m in the zoo and they come to visit me.

When my husband and I were first dating we went camping in a campsite on Skyline Drive. First a skunk waddled to our campsite after a piece of hot dog my husband dropped, then we finally got past the skunk into our tent. In the middle of the night Jim wakes me up. “Diane! Diane! there’s a bear outside our tent!” (You could hear the bear breathing) I rolled over and said, “Just be quiet and he’ll go away.”
The next morning we found that the bear had ripped open a convertible top to get at the campers food stored inside.

About the bear escaping story idea? A lion did escape from a zoo or something and ran wild in the Regency countryside.