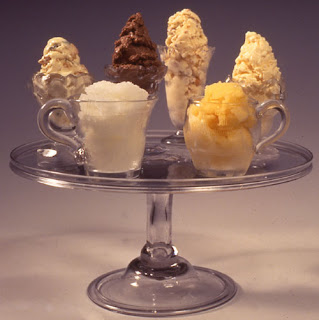 I blogged yesterday over at The Spiced Tea Party about dealing with the heat. I live near Washington DC where every year, when the temperatures spike into the upper, and very humid, 90s we assure each other, and unlucky visitors, that it never normally does this here. Right.

So I thought I’d talk today about the joys of Regency summer living. Ice cream certainly wasn’t invented in the Regency, but it was very popular among those who could afford it–visit historicfood.com to check out recipes for this gorgeous collection of ice creams and water ices: in the back, royal cream ice, chocolate cream ice, burnt filbert cream ice and parmesan cream ice; in front, bergamot water ice and punch water ice. I’m guessing that the parmesan cream ice (and some of the others, too) must have been served as a savory accompaniment, to be expected when each remove would include items that nowadays we’d consider being strictly dessert. 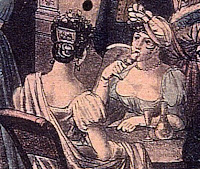 Big question–were ice cream cones used in the Regency? According to this illustration from 1807, and article at historicfood.com, they were.

The great houses made sure they would have plenty of ice by constructing an ice house–this is the interior of a brick-built Georgian ice house at Parlington Hall, Yorkshire, which measures a mighty 16 ft. in diameter and around 20 ft. deep.

Ice would be cut from local lakes or imported from countries such as Norway, and insulated with straw. The actual igloo-like design of the ice house, and its position in a shady spot on the grounds would aid in keeping the ice cool.

As for cool drinks, spruce beer was always a favorite. Made from spruce buds, its flavor could cover a whole range from citrus to pine–or possibly not. exoticsoda.com bravely tested a modern brand and came to this conclusion:

If ever offered a bottle, save yourself the trouble and drink some paint thinner. It will taste the same, but you can wash your brushes with the remaining thinner you don’t drink. Spruce Beer would probably melt the bristles off. But it’s not all bad …there is a sweet buffer that does keep you from projectile vomiting. 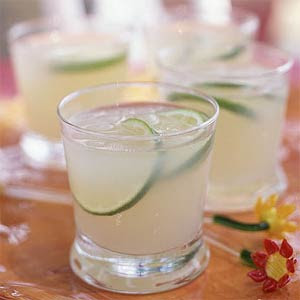 Lemon barley water was a favorite, too, first manufactured by Robinson and Belville in 1823 in powder form, to be mixed with water to cure kidney complaints and fevers. It also aids in lactation, should you have the need, and Robinson’s lemon barley water is still the official drink of Wimbledon for players (although presumably not for that reason). Here’s a modern recipe from cuisine.com.

As for lemonade itself, here is a recipe from the seventeenth century from coquinaria.nl, and Mrs. Beetons’, from the 1830s, at thefoody.com.

I also looked around for some ginger beer recipes–ginger was readily available as it was a subsidiary crop in the sugar-producing islands and found this one at allrecipes.com which claims to date back to the Tudor era.

What are your favorite summer drinks or ice cream flavors? Have you ever made any yourself? Do you have any favorite historic food sites?

Oh, Janet. You know you’re talking my language now, LOL! My favorite summer drink is Campari and soda with a wedge of lime. Yum! I’m not opposed to a nice Pim’s cup either . . .

I love ice cream an I make it all the time at home. Guinness Ice Cream is a big hit in my house (cause you can make Guinness floats with it!). And I fell in LOVE with Salt Caramel Ice Cream in Paris. After a ton of experiments I finally managed to make it myself.

For food, I like to use Gode and Google Books (which is filled with period cookbooks!).

Summer? What’s that? (Asks the bitter Northwesterner who’s been shivering the past two weeks of what’s been the coldest spring in Seattle since 1917–it’s supposed to break 60 today for what I’m pretty sure is the first time this month. I love our normal cool summers, the upper 60s and 70s with sunshine, but this is ridiculous.)

As for ice cream, lately I’m fond of two new Ben & Jerry’s flavors–Americone Dream and Cake Batter. For drinks, I love sangria, and there’s nothing better for thirst-quenching than an ice-cold IBC root beer or proper homemade lemonade like my mom used to make, all sweet with bits of lemon pulp.

Sangria baby! Lots of fruit to munch on and yummy cold wine. Plus it tastes so good, you forget there is alcohol in it. Also Pimms Cup. I can’t have ice cream because I am lacto-intolerant, but I can have Pinkberry.

Summer is the time for lychee martinis and mango margaritas. As for ice cream, I love cookies ‘n cream.

Susan, I must check out that Cake Batter flavor! 🙂

I’m an ice cream purist, so it’s chocolate all the way…or if desperate, vanilla.
But I love real Italian gelatto in fruit flavors, like raspberry.

My current addiction are Sugar Free fudgesicles which I eat in quantities enough to equal a dish of chocolate ice cream.

Drinks? Champagne works for me. Or Diet Coke.

First things first: Riskies, I’m delighted to tell you that Tuesday night I met SusanSW once again! What fun! Too bad, I didn’t get a chance to chat with her afterwards.

Those ice-creams look delicious despite the arctic temps here, Janet.

I’m a plain vanilla kinda gal. The more “interesting” flavors I like are French Vanilla and Dulce de Leche. The most exotic flavors are rum raisin, lychee, and lavendar.

I have way more summer than I can handle here in Alabama. Can I send some to you Susan?

Summertime here means consuming gallons of Milo’s Sweet Iced Tea. It is what fuels my writing.

Ice cream is chocolate, baby, all the way. Although I have fond memories of making homemade strawberry and peach ice cream when we were kids.

A dear soprano friend of mine was singing in Italy when I was in Germany. I visited her one summer and fell in love with strawberry and raspberry gelatto. Nothing like it when strolling the streets of Perugia and watching all those handsome Italian men watching you!

I have way more summer than I can handle here in Alabama. Can I send some to you Susan?

Well, the sun came out this afternoon, it got up to 66, and it’s supposed to be in the 70s this weekend, so I’m not complaining anymore. But last weekend when it was only 52, I was offering to take 20 degrees from anyone on the East Coast.

Susan, I’d have sent you 20 or 30 degrees in a flash. It was around 90 here Monday and Tuesday–awful! My brain fried and I was sure everything I wrote was pure drivel, though my CP assured me it wasn’t that bad.

Well, anyone who was at the NJRW conference knows I like margaritas but I’m not fussy. Anything fruity and cold will do as long as it’s not too sugary.

As to favorite ice creams, I’m kind of baroque that way. I love all sorts of concoctions. One of my favorites is Perry’s Bittersweet Sinphony. It’s coffee ice cream with dark chocolate and fudge. Yum. I also like beer ice cream. Great Lakes Brewery in Cleveland has one made with chocolate chunks and their Edmund Fitzgerald Porter. Yum again.

Yummy, yummy treats! I’ll add one more one of my deli thugs came up with. Coffee mixed with two shots of espresso and – wait for it – Nutella (this one’s for you Keira)! Flash freeze it and you have a yummy for your tummy Hazelnut Mocha Granita Delight.

This kid’s no ordinary deli thug. He’s all set for the Culinary Institute of America this Fall.

Actually really pleasant weather here the last few days–high around 80. But I’m sure the blistering heat will return before too long.

I used to make lemonade all the time when I was a kid. But weirdly, almost all the period recipes I’ve ever tried have been winter dishes.

Kalen, I order Campari and soda with lime when it is important that I pretend to be an adult.

Throw out all the ice creams I mentioned before. Santa, bring on your Nutella coffee ice cream. I have a mixing bowl and a mixing spoon waiting. Why bother with tiny bites? Eat lots of big bites. Yum. Yum. YUMMMMMMMMMMMMMmmmmmmmmmmmm.

Sorry, I read the post wrong. I thought you were implying that ice cream wasn’t invented until after the Regency. totally confused.

The date La Rousse Gastronomique gives for actual ice cream as opposed to ice or sorbet is 1650.

The illustration you found is from Le Cafe frascati by PL Debucourt. It is reproduced in my copy.
Frascati was of course the most famous gaming house in Paris during the Directory and the Empire.
It was Procope who started selling ices and ice creams in Paris in 1686.

This is all making me hungry and thirsty… my favorites are tart home-made lemonade in a tall glass with plenty of ice, lemon slices, mint, and lemon balm (lemon balm grows around my house like a weed and I’ve never found a good use for it).

I love ice cream that combines chocolate and raspberry but really I’ll take just about anything so long as it doesn’t have marshmallows in it!

Count me in for ice cream! I also have a weakness for those cheap icees you throw in the freezer.