Today I’m talking about the ordinary soldiers, the kids who signed up for the king’s shilling out of patriotism, were fooled by unscrupulous recruiters, or because they had so few options. And they were kids–for the most part under twenty. Here’s a typical story of how a Waterloo veteran came to join the army a few years after his father was deported to Australia for sheep-stealing, when he found himself the head of the family at age fifteen.

One in four soldiers died that June day in 1815. Waterloo was an unusual battle because it was the bloodiest so far in British history; it was also unusual in that all survivors, of whatever rank, were awarded a medal. 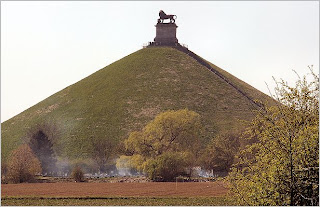 There were no war memorials with the names of the fallen, however humble, erected in villages or town squares, although this memorial, composed of the battlefield dirt itself, was raised at the site in Belgium. Locals claim it’s haunted and full of bones, and they may be right. Ordinary soldiers didn’t count; as far as war reports went, they were anonymous, only numbers. Their corpses were raided by war profiteers for teeth–for years after, false teeth were known as “Wellington teeth.”

It’s heartbreaking to think of the families waiting and as time passed, realizing that their son, brother, or father had been killed. They might not even be lucky enough to receive a letter, such as this one from Private Charles Stanley to a friend in Nottinghamshire, describing the everyday life of a soldier. Almost certainly, they’d never know the circumstances of their loved one’s death. 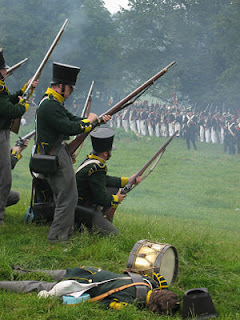 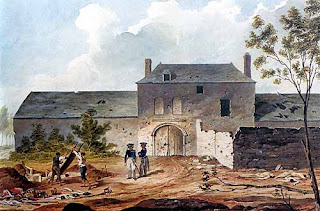 You can read more of his letter at militaryheritage.com. Private Stanley was one of the many who didn’t come home.

Here’s an excerpt from the brilliant movie History Boys, where a poem about a young soldier who dies far from home, Drummer Hodge by Thomas Hardy, is discussed.

And here’s the poem:

They throw in Drummer Hodge, to rest
Uncoffined–just as found:
His landmark is a kopje-crest
That breaks the veldt around;
And foreign constellations west
Each night above his mound.

Young Hodge the Drummer never knew–
Fresh from his Wessex home–
The meaning of the broad Karoo,
The Bush, the dusty loam,
And why uprose to nightly view
Strange stars amid the gloam.

Yet portion of that unknown plain
Will Hodge forever be;
His homely Northern breast and brain
Grow to some Southern tree,
And strange-eyed constellation reign
His stars eternally.

This is the heartbreaking reality of war. It is rarely glorious, rarely heroic. It is unending misery and suffering on both sides, whether friend or foe. Two hundred years later, nothing has changed in this. Those people who wage war, who decide to send kids into this maelstorm of horror, rarely experience the deprivation themselves.

Thank you, Elena, for honoring those lost ordinary men….

And yes, that was Janet. I am over my multiple personality disorder. 🙂

Jane, one of my favorite books! Did you know that Night Watch by Pratchett was inspired by Peterloo?

And, yes, I am Janet today.

Janet, no I did not Know that, but I can see it.

Vimes is a great character. Pratchett’s illness is some of the worst news I’ve had all year.

Thank you for the post and for the movie clip, which was such a wonderful reminder that poetry is not just words on a page but beautiful sounds and rhythm. There recently was a poetry reading contest here in Washington, and hearing all the young people recite poetry was such a joyous noise. Plus Dana Gioia, head of the NEA, gave an annotated version of Leigh Hunt’s “Jenny Kissed Me” so that others could read it aloud too. I loved that poem when I was a pre-teen, and I must say I still love it. Not quite Hardy, but it’s such a complete little story in so few lines — it actually could be read in several different ways, and I thought it might be an interesting inspiration for a romance novel.

I just don’t even know who I am these days. This past Monday, I could have sworn I was Cara.

Diane, you *were* me! And I was you. Hence the extra cat hair on your sofa.

The movie. Never saw the play. (Had a chance, didn’t take it, still regret it.)

The terrible human cost of war is one of the things that makes its fascination so puzzling. But it was only really in the 20th century, after the experiences of WWI and WWII, that the idea finally took hold with the overwhelming majority that even a just war is terrible rather than glorious. John Keegan, in A History of Warfare, ends with a very moving hope that humanity can move beyond war.

limping in late, Janet, to tell you what a beautiful post this was.