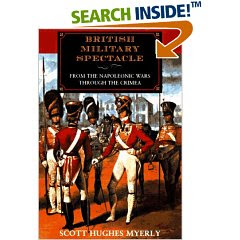 In researching my latest hero, a Sharpe-based soldier, I’ve been delving into Scott Hughes Myerly‘s British Military Spectacle. I highly recommend the book; every page has some essential, interesting nugget of information, even if you’re not writing a battle-scarred hero, as I am.

In reading it, I’ve been alternately horrified and impressed at how the British Army used dress to control its soldiers.

As Janet pointed out yesterday, many British soldiers were boys or men who had no choice (“Prison/deportation or the Army?” is just as obvious as Eddie Izzard‘s “Cake or death?”) or were coerced to join.

To keep their soldiers–some of whom were blackguards, to say the least–in line, their superior officers demanded perfection in appearance. Keeping the men busy cleaning their kits kept them away from alcohol, which was one of the Army’s biggest problems (Sharpe mentions this frequently, always trying to destroy whatever alcohol is within his men’s vicinity). Myerly says, “The ideal of perfection was central to the art of nineteenth-century military management, especially in connection with martial display.” 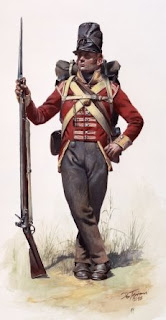 Myerly then goes on to say that “Officers were sometimes obsessed with presenting a correct and pleasing appearance, which often resulted in the total neglect of other significant considerations, even if these were vital to the army’s success.”

Wow. To prove the point, Myerly discusses the headgear required, sometimes two feet high, made of material that was ridiculously hot in the summer, got drenched in the rain, and blew off whenever there was a strong wind.

On one dress occasion in 1829, Wellington, in full military regalia, was blown off his horse by a gust of wind. In 1842, Queen Victoria demanded that a 73 year-old Wellington wear all the proper military gear, which made him trip and fall.

The stocks soldiers wore around the neck had to fit tightly, and were sometimes made too tight so as to make the blood go into the soldier’s face and make him look hale and hearty, even if he hadn’t been eating properly. 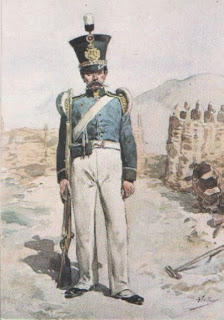 Soldiers had to wear uniforms sometimes designed by people who had no idea what a battlefield was like (King George IV, I’m looking at you). The uniforms were impractical, binding, difficult to maintain and expensive. But they looked good, and that was all that mattered.

As Billy Crystal‘s Fernando Lamas character says, “It is better to look good than to feel good.”

It’s clear, from history, that this kind of restrictive insistence on proper attire worked to keep the Army intact and submissive. Of course it chafes at our notions of freedoms as well.

How about you? Have you ever had to wear a uniform? Follow a dress code? Did it make you feel more official? Did you hate it? Did you like not having to worry about choosing what to wear?

21 Responses to Dress For Success