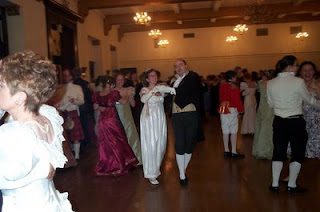 It has occurred to me that if I were to write a Regency dance scene, I could draw on certain experiences I’ve had doing English country dance to flesh it out.

I don’t mean the basics — I mean the little things…

And as I’m not planning on writing a dance scene anytime soon, I thought I’d share the ideas…because ideas like company.

Here are a few things that I think a Regency woman might not care for in a partner, or indeed in any of the many people she will dance with during a country dance: 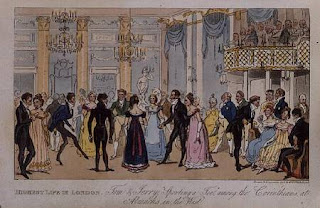 1) Unpleasant hands. Now, I know that gloves would change things a lot — but I still think that over the course of a long ball, a Regency dancer might still end up with hands that are so hot, cold, or damp that they’re not so pleasant to hold, even for a moment.

2) Men who mess up the steps. And of course everyone will mess up the steps sometime or other — but if a Regency lady has her foot stepped on (especially by a man) or is crashed into with force by someone (particularly a large man), I think it would still extremely unpleasant. 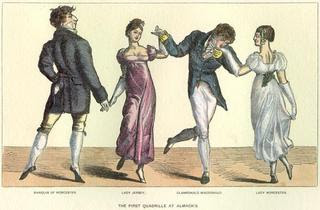 3) Men who mess up the steps, and then insist that she was wrong. This is, quite literally, adding insult to injury. And I suspect it happened quite a bit more in Regency times than now.

4) Men who cannot take hints. Or commands. Sometimes the woman knows what the man’s next move is, and he does not. And he knows that he does not. So if he has no idea where he should be going, why would he be so reluctant to advance toward the lady holding out her hand to him? Or to move where she is so politely pointing, waving, nudging, looking, or telling him? Could it be that he thinks that if he doesn’t know a thing, no one else can? Or is it just that no female can? Or is he just one of those single-minded men who are so busy trying to remember a thing, that they cannot notice anything else? 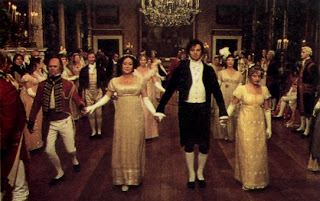 5) Other Way, Mister Collins! The ladies in the Firth/Ehle Pride and Prejudice say this, repeatedly. And yes, some men (and women) just can never learn a certain step. Even the fiftieth time. Even if they’ve just crashed into their partner forty-nine times. (It reminds me of the bee in Bee Movie: “Maybe it’ll work this time! Or this time! This time! This time!”) I think the emotion this particular behavior produces, however, (assuming there is no physical pain), is more likely to be astonishment than annoyance. 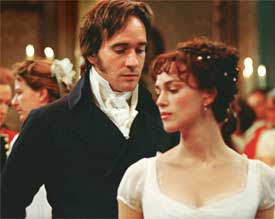 6) Couples (or singles) who leave a dance in the middle. From the middle. A country dance is a complex organism, and if a couple that is not at the bottom of the set gets bored and leaves, chaos inevitably ensues. It’s rather like pulling on a loose thread in your sweater — the entire thing quickly turns to mush. But some folks just don’t care. (I suspect they’re those More Important Than You people — you know, the ones who cut in front of you in line, who smoke where they’re not allowed, who talk on their phones during movies.)

Well, those are the things that occur to me. How about you? If you’ve done any English Country Dance (or other ballroom dance), do you have anything to add to the list?

And remember: next Tuesday, be sure to come by to discuss (or learn about) the 1980 BBC PRIDE AND PREJUDICE! (The one with David Rintoul and Elizabeth Garvie.)

Cara
Cara King, who can shaw-side or sharp-side or do a sheepskin hey

Elena Greene grew up reading anything she could lay her hands on, including her mother's Georgette Heyer novels. She also enjoyed writing but decided to pursue a more practical career in software engineering. Fate intervened when she was sent on a three year international assignment to England, where she was inspired to start writing romances set in the Regency. Her books have won the National Readers' Choice Award, the Desert Rose Golden Quill and the Colorado Romance Writers' Award of Excellence. Her Super Regency, LADY DEARING'S MASQUERADE, won RT Book Club's award for Best Regency Romance of 2005 and made the Kindle Top 100 list in 2011. When not writing, Elena enjoys swimming, cooking, meditation, playing the piano, volunteer work and craft projects. She lives in upstate New York with her two daughters and more yarn, wire and beads than she would like to admit.
View all posts by Elena Greene →
This entry was posted in Uncategorized and tagged dance, English country dance. Bookmark the permalink.