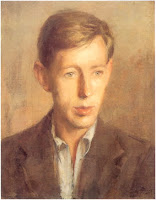 I was planning to blog about something entirely different today but I received an early morning inspiration from Garrison Keillor’s A Writer’s Almanac from American Public Media.

As you may have noticed here, we really like to celebrate birthdays and anniversaries, and I was thrilled to find out that today is the birthday of poet Laurie Lee (1914-1997), who’s not so well known here as he is in England. His most famous work is Cider with Rosie, about his childhood in the village of Slad, near Stroud in the Cotswolds, a place where people lived pretty much as previous inhabitants had for centuries–another great source for English rural life (the, ahem, Regency tie-in). After leaving the village for London and then Spain, where he fought in the civil war, Lee returned to England–he had a job writing propaganda during World War II (I think he was fired) and then settled in Slad where he lived for the rest of his life.

Here’s the beginning of Cider with Rosie:

I was set down from the carrier’s cart at the age of three; and there with a sense of bewilderment and terror my life in the village began.

The June grass, amongst which I stood, was taller than I was, and I wept. I had never been so close to grass before. It towered above me and all around me, each blade tattooed with tiger-skins of sunlight. It was knife-edged, dark, and a wicked green, thick as a forest and alive with grasshoppers that chirped and chattered and leapt though the air like monkeys.
I was lost and didn’t know where to move.

A tropic heat oozed up from the ground, rank with sharp odours of roots and nettles. Snow-clouds of elder-blossom banked in the sky, showering upon me the fumes and flakes of their sweet and giddy suffocation. High overhead ran frenzied larks, screaming, as though the sky were tearing apart.

If your local NPR affiliate carries A Writer’s Almanac, do listen to it. I hear it at about 6:35 each morning and it’s the signal for me that I really must get out of bed. The format is quite simple–a report on anniversaries/birthdays (with a strong emphasis on the literary), followed by a short poem. You can view today’s offering, Naming the Animals by Anthony Hecht, learn more about Laurie Lee, and browse the archives here.

Do you listen to this show? Have you read Laurie Lee? Are you a Garrison Keillor and/or A Prairie Home Companion fan?

wow. Janet.
I’ve not heard of Laurie Lee, but that excerpt is absolutely stunning. I’m in awe of it!

That’s a lovely poem, Janet! And I do enjoy “Prairie Home Companion,” and listen almost every weekend. 🙂

Thanks for the heads up, Janet!

I listen to Writer’s Almanac and Prairie Home Companion whenever I can (life’s too crazy to catch either radio or TV shows consistently). I did get to see one of Keillor’s shows live in NYC–that was very cool!

I am a Garrison Keillor fan, but I have not listened to Writer’s Almanac. I will definitely tune in.

And that excerpt was amazing. I have never heard of Laurie Lee, but I will definitely go in search of more of his work. Amazing.

I’m putting Laurie Lee on my must read again list now, should have known it would be dangerous blogging about him…

I have mixed feelings about PHC–when I worked in radio I had to tape the live feed (at 4 MST) to air at 6 (MST) and I was always terrified I’d mess up the recording and be lynched. For a long time GK’s news from Lake Woebegon failed to move me, until one particular episode about a man whose father had left his family because he was in love with another woman. The son, dealing with the estate of the father he’d never really know, discovered the love letters his father had written, and it moved me to tears. It was such wonderful, powerful stuff.
I also love GK’s wise, and frequently angry, columns he writes for salon.com

I only hear “Writer’s Almanac” every once in a great while–not really a morning person!