I admit it, I had no idea what to write about today. It is summer, after all. I’ve been spending time dangling my feet in the kiddie pool I bought for my dogs, drinking lots of iced tea and writing, writing, writing! Reading, reading, reading! But what Janet said on Thursday was right–we Riskies do seem to love anniversaries. So, I did a search to see what was going on in the world a hundred or so years ago.

This is what I found: On this day in 1859, the first official dog show in the UK was held in Newcastle. The only breeds shown that day were Pointers and Setters. A show later in the year, in Birmingham, added Spaniels to the mix, and in 1860 hounds were added (thus paving the way for this year’s Westiminster winner, Uno the beagle). The first London dog show was in 1860, in Chelsea, with the official Kennel Club founded in 1873. (The Victorians did love their show dogs!). 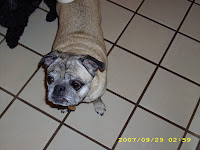 I have 2 dogs of my own, a very bossy miniature Poodle mix (who loves to swim in her kiddie pool and bark a lot) and a much more laid-back Pug (that’s her in the pic!). Pugs were quite popular in the Georgian/Regency period, but their history goes much further back, to the Chinese Han and Tang Dynasty around 150 BC. Their path to Europe isn’t certain, but the earliest reference to them there comes around 1572, when a heroic little Pug woke his master, William of Orange, just in time to save him from Spanish raiders. In 1713, there was a portrait titled “Louis XIV and His Heirs,” with the appearance of a little fawn Pug (not named, and presumably not one of the heirs!)

English artist William Hogarth owned a series of Pugs and often painted them, especially his favorite “Trump.” In 1740, the sculptor Roubiliac modeled terracotta statues of Hogarth and Trump, which were later produced in porcelain by the Chelsea pottery factory.

Many famous historical figures have been owned by Pugs. Madame de Pompadour, Marie Antoinette, George III and Queen Charlotte, Empress Josephine, Voltaire, George Eliot, the Duke and Duchess of Windsor, Princess Grace, and Queen Victoria. Some of her Pugs included Venus, Olga, Fatima, Pedro, and Bosco (who has his own monument at Frogmore). My own dog is named Victoria in her honor.

Do you have dogs (or pets of any sort?) Are they enjoying their summer?

Cavaliers are such beautiful dogs! I’ve thought that if I got a third dog (not a good idea in my little house, but still…) I would love one of those.

Or maybe a dachshund. I grew up with those, and still love them so much! 🙂

I have already chronicled the felines who inhabit our household (trying to get Cara to adopt them, but she opted for KITTENS):
1. Invalid cat- stays on the kitchen table and needs to be carried to the litter box.
2. Devil cat- the cat who terrorized Invalid cat so much she’s afraid to get off the kitchen table and has been prevented from going to the litter box.
3. Mr. Nice Guy – forgot what I called him before, but he looks like Sylvester and if friends with everybody.
4. New York cat: Loves to play with garbage and will scrap with any of the others

I did get kittens. Two perfect, perfect kittens. And if they do happen to (on rare occasions) rip long strips off my flesh or chew on the electric cords or claw the curtains or eat my plastic flowers, it still wouldn’t detract from their perfection.

I also have a stuffed cat. He is even more perfect. He never claws me, though he does nag me a lot for more pizza and television.

(Come to think of it, he’s quite like Bertie the Beau in that way. Wonder what he’s been up to?)

Oh Kate, I am so jealous! We got our Cavalier King Charles Spaniel when we lived in England. I was nine and to me and my brothers Mischief (aka Debenwood Roland) was the most perfect puppy ever! He was a tricolor and he and our British orange tabby kitten were the best of friends. We had to ship them home to the States in the same crate because Mischief howled otherwise. One of the only days I ever saw my big macho military Dad cry was the day we had to put Mischief to sleep. I was 26, my brothers were 23 and 20. Dad called us the night before and gave us the bad news and we came home to Pelham so that we could all be there. My Dad was very big on the sacred trust and the responsibility of owning a pet. Later we suggested Dad and Mom get another King Charles, but my Dad said “There was only one Mischief.” Dad is gone, but Mom has a Pomeranian and yes, a pug named Priscilla! She is the funniest little dog and Sarge the Pom is a prissy little guy!

Now I have three house dogs, a chihuahua named Frodo and two dachshund/basset crosses who are sisters – Adelaide and Sassafras. They are a riot, especially when Rebecca, the cat who thinks she is a dog joins in on their wrestling matches. My three male cats – Tigger, Pooh, and Bagheera weigh in at 17, 20 and 24 pounds and their only activities are sleeping on my bed under the AC, lumbering to their separate litter boxes (they do NOT like to share anything!) and complaining when the food dishes (also separate) are empty.

I also have nine outside rescued dogs in dog runs on my five acres. They really are the most wonderful, funny, playful and happy creatures and they always act so grateful to be in a loving home with room to run!

I believe our goldfish is enjoying the summer. At least I have not heard him (her?) complain.

Sometimes I think about getting a more active pet but then I think about our crazy schedule and decide I can’t take on one more responsibility! For now I’m content with fictional pets. I’ve just written a British shorthair cat into my mss. My heroine lives in cottage and needs a good mouser.

No dog, but a cat who spends most of her time asleep. On hot days I find her in odd undignified positions on the bed.

Cara, what a lovely idea to stuff your cat. It must be a great comfort to you to have her with you still.

My brother has a dachshund-basset-poodle. Our household waits of regular pictoral and videographical updates on how Spencer is growing and what antics he’s getting into. Our post office is familiar with parcels being sent, addressed to Spencer.

Louisa, I will love you forever for naming your dog Bagheera. Jungle Book is my favorite movie EVAR, even trumps P&P.