When will you meet your Waterloo?

Diane Report: Home from Georgia; STILL writing!!!!!!
It turns out the last chapter is harder to rewrite than it was (or seemed) when I stayed up all night writing the first version. I’m really close to having the book done but I want to take a few more days to go through it once more and polish it.
See? These struggles don’t end once you are published, except having a deadline, even if you miss it, does make a person put butt-in-chair.

When I was packing for Georgia, I searched everywhere for my copy of Howarth’s Waterloo: Day of Battle, but I couldn’t find it. I especially wanted this book because it uses first hand accounts.

I grabbed a couple of other Waterloo books from my shelf and hoped they would do. My book ends at Waterloo. At least this version does. After revisions, who knows? I didn’t need information about the battle, but rather what it would have been like for someone in Brussels before and after the battle.

The Waterloo Campaign by Albert A. Nofi, part of the Great Campaigns series of books, proved helpful in many ways. This treasure does explain the battle in terms I can almost understand, but it also has sidebar vignettes and explanations, biographies of the important players and information about such things as musketry, supplying the troops, and, very helpful to me, the weather.

Even when it didn’t help me in my story, it proved very diverting just to read. 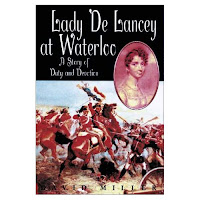 I even had my husband stop at a Borders along the way to see if they had Lady De Lancey’s book, which I think I have, but by the time I thought of it, we were on the road.

Desperation breeds creativity, I’m convinced. In the hotel I did a search on Google Books and found this treasure: Waterloo Days; the Narrative of an Englishwoman Resident at Waterloo in June, 1815 by Charlotte A. Eaton.

This book was written by a Englishwoman who, in the company of a brother and sister, arrived in Brussels on June 15, 1815. She wrote a memoir, describing the trip, the city, the events of the days right before and after the battle. She and her brother and sister fled to Antwerp on June 17, like many of the English did, but my characters didn’t so I had to use my imagination a little, but otherwise she gave a very vivid account of the uncertainty felt by the people who knew the battle was in progress, but did not know anything else. She even visited the battlefield several days afterward.

I highly recommend looking up this little book and reading it and saving it or bookmarking it. It was truly a gift from the Universe for me, just when I needed it most.

That’s how I met my Waterloo (book).

What books have you discovered in that wonderful, accidental, just-in-time way?

Congratulations on your lucky find and on being close to finishing the book!

It wasn’t so immediate a need, but I have had some lucky UBS finds. I once found Romance of the Road in a local UBS and I’ve used it tons of times since then. Recently I found a promising looking one about the secret life of London. I’ll let you know how it turns out!

Good luck with the revising and polishing. That is my favorite part of writing, changing “happy” to “glad” (glad is shorter) fiddling here, fixing there. Rough drafts, OTOH, are usually torture minus the thumbscrews.

Most of the research books I find these days come from notes made on blogs like this or the always-informative-but-therefore-expensive Beau Monde loop. I did happen upon a really nice general book, Wellington’s Regiments by Ian Fletcher, at Wellington’s townhouse, Apsley House, at 1 Hyde Park (great address!) It’s my go-to all-purpose reference to which army units were at which battles, who commanded them and a general summary of the battle itself. Very useful!

I have Wellington’s Regiments, Julia, and I’m reasonably certain I can even find it!

Deb, you must give me the name of the Secret London book! I have Romance of the Road and must see about using it more.

When I learn time management, I’m going to catalog my book collection.

My solution to not finding my Waterloo: Day of Battle book was to order another one from abebooks.com. When I discover duplicates, I donate them to the Beau Monde auction.

I love it when I find a resource in an unexpected place. I found a copy of Culpepper’s Herbal in our local flea market / antique attic and paid about 2 dollars for it.

Like Julia I make notes on all of the books mentioned on these blogs and put them on an index card in my research book wish list box. When I get a little money I pull out the box and buy the ones I am most interested in at the time. Once I order it, it goes in the “ordered” section of the box. When it arrives I file the card in the “I own” section of the box.

This year I am putting my wish list on Amazon and several other lists so my brothers can order from the lists for my Christmas / Birthday present. (My b’day is Dec. 29th. Bummer.)

There are some online bookstores in the UK that will only deliver to an address in the UK. My Mom asked some of the people who were our neighbors in England when I was a child if I can have books shipped to their addresses and then pay them to ship them to me. My Mom is very enthusiastic about my writing and the old neighbors are too.

The most amazing book I ever found was a first edition of Faulkner’s The Sound and the Fury. My late DH was a HUGE Faulkner fan. I found the book in a real dive of a used book shop in a box of books that appeared to have come from some grand old personal library. I paid 25 bucks for it and it was one of Roger’s most prized possessions.

An amazing percentage of the books I read are ones that I stumble across and think look cool. But then, I am interested in a lot of different subjects, so the bar for looking cool is not all that high. 🙂 My darling wife will sometimes point books out to me, saying “This looks like a Todd book,” and she is usually right. (I wish I had as good a track record going the other way, but oh, well.)

Predictable is good, particularly if you’re the giftee. Cara is lucky.

More than a book, it was this blog that I discovered in an accidental, heart-warming kind of way.