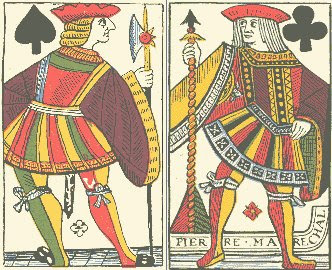 Because I’ll be teaching Regency card games at the Beau Monde soiree next week (ack! NEXT WEEK?), I’ve been refreshing my memory of the rules of cassino, speculation, and the like.

Which leads me to the question of the day, which is:

It is your job to examine the evidence!

Okay, yes, in the “old” days, people were a lot more accustomed to doing arithmetic in their heads. But still. This is HARD.

FACT TWO: Read the game rules in a Regency Hoyle’s, and you’ll constantly trip over passages like the following:

Any person playing with less than four cards must abide by the loss, and should a card be found under the table, the player whose number is deficient, is to take the same.

I guess rules like “don’t drop your cards under the table” are a little too hard for these folks.

So, here we have two warring pictures:

That of the very clever, James-Bond-like gamester…

And that of the Three Stooges, constantly dropping cards on the floor.

So: which is it? Let the voting begin!

Cara
Cara King, author of MY LADY GAMESTER, who neither counts piquet in her head nor drops cards on the floor…

Hmmm. Moe checking in here! Wasn’t there drinking involved in most card room activities? I think lots of gamesters started out as James Bond and ended up as one or more of the Stooges. All those men losing their inheritance and then shooting themselves – gotta be a Stooges moment!

I think it would be difficult to keep score in your head, drink, gossip and who knows what else all at the same time. No wonder people lost so much money.

I couldn’t agree more about Piquet! I was lucky enough to find a computer version at Meggie Soft Games that I used to learn the game for The Wagering Widow. No way I could keep the rules in my head.

Maybe Hoyle knew somebody who liked to cheat by dropping cards so he made it a rule!

I think that if you play regularly, some play eveyday, for the talented players, keeping track of the rules and the math does become a habit. My father-in-law is a huge card game fan. And he has so much arcana in his head, including different rules depending upon with whom he’s playing.

Having said that, with the addition of drink comes hubris resulting in loss of money, daughters, unentailed estates, and heavy debt, not to mention suicides and duels.

I find keeping the rules in my head to be much easier than keeping the score in my head. The rules stay the same, so the more you play, the more familiar they are. (And the rules for piquet, once learned, aren’t that hard.)

Louisa, I like your explanation — the drinking morphed them from one to the other! 🙂

And yes, Georgie — the true reason for all those estates lost!

Diane, I think you’re likely right — some of these very basic rules were probably as much to handle cheating as to address incompetence…so one couldn’t, for example, throw a bad card on the floor and then complain that one had been underdealt, and should get a new one from the pack…

LOL! Which reminds me….when my close friend Heather (who’s a big Regency reader) had a baby girl, I recall her telling the child in a babytalk voice “and I would never gamble you away!”

Ah, but many very entertaining books wouldn’t exist if all fictional parents were so responsible. 🙂

As Keira says, it becomes a habit. Think of sports like baseball, basketball, football, and Nascar and how people are able to keep the stats in their head, rattling them off at will. Those who count cards need the skill of keeping track of the numbers.

As to the silly rules, it sounds like things haven’t changed when you consider some of our warning labels, like the one on the blow dry that says “Do not use wile sleeping.”
~Judy T

“like the one on the blow dry that says “Do not use wile sleeping.””

LOL! I do try not to fix my hair while sleeping, but it is so darn hard. 🙂

I was also laughing at the vision of players falling all over the floor after hitting the punch! I could never keep track of the score like that, even while sober, though I know that people in the past often had much better powers of memorization than we do now. (like the players in Shakespearean theater who could memorize multiple new plays every week!. And I’m pretty sure THEY weren’t sober much of the time, LOL)

Those cards look like the ones I grew up using when we played Italian card games. ‘Scopa’ is easy to keep score but ‘briscola’ is very difficult (for me) and involves a lot of yelling and slamming down of cards….and that’s stone cold sober, lol!

Another classic rule: “Do not iron clothes while wearing.”

Supposedly these warning labels are to protect against lawsuits, but even given the litigious nature of American society, it’s hard to imagine that one going forward. Once the judge stopped laughing, anyway.

“Do not microwave your cat.”

“Do not throw out the baby with the bathwater.” 🙂

Those farmers at Farmer’s Market who do sums in their heads while keeping track of multiple customers’ fractional orders. No way could I do that, and I can finagle my way through partial differentiation equations.

I can finagle my way through partial differentiation equations.

Keira, you have no idea how excited I get when a woman says things like that. 🙂

Cara, how on earth can I have not known that you were a Regency author??!! I just tripped over this site while looking for something else and there you were. Jeez, you might have said something. I’ve only been doing Regency dance with you for several YEARS now.

Sorry, Kris!!! I recall I told Annie about it at one point several years ago (and left out flyers for my book at the Jane Austen Ball that year), and I had the impression it had been generally discussed, so I kind of assumed that everyone knew! Sorry!!!

BTW, if you want to see my posts on the various Jane Austen & Playford Balls, here are the links: