Bertie at the Beau Monde

I am, essentially, a man of peace.

Any of my fellow Exquisites would tell you so.

(After all, Brawling and other Low Sports tend to disarray one’s hair, and they can even lead to dust landing on one’s clothes.)

I say this to clarify what I am about to relate.

With only the most generous motives did I attend the Ball held by the Beau Monde. (I am, after all, a member of the beau monde, if not of the Beau Monde. And all balls and assemblies are delighted to have my attendance, regardless of whether or not I paid for a ticket with filthy lucre…or, rather, clean lucre, which is the only sort I would ever carry.) 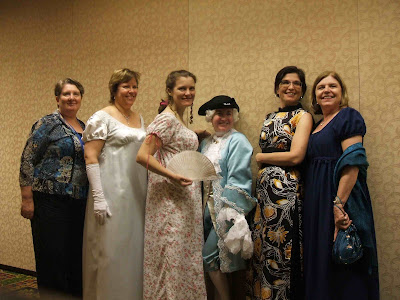 Moreover, I had a purpose both simple and enchantingly noble: to dance with each of the Risky Authors, and thus bring great delight and honour and elegance into their authorly lives.

(And I cannot believe that authorly lives have much delight or elegance in them, in the general way; after all, what delight or elegance can there be to sit in front of a computing machine, all alone, with no one to admire one’s profile or envy one’s coat?)

But study carefully the picture above, and you may guess what my difficulty was! 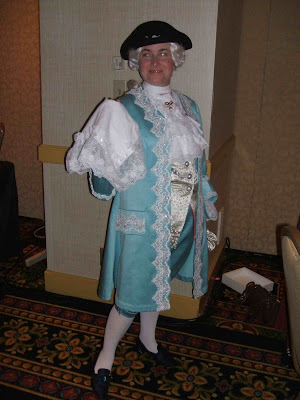 The Risky ladies had been already claimed by a Mysterious Gentleman in blue.

When I asked Mme Frampton to dance, she responded that her dance was already spoken for by this unnamed gentleman.

What is even more astonishing — I was answered in the same manner by all of the other five Riskies!

(Very well, I admit — the other four. I never could locate Mlle McCabe. But I did ask Mlle Soleore, Milady George, and the Great Empress of All Canines, and they all responded that they, too, were claimed by the azure adventurer!)

In all good will, I decided to ask the strange gentleman what his secret was. And so I approached him, and asked him if he could meet with me to explain his mystical powers over the female population.

But the fellow misunderstood me!

Such an impatient man. As soon as I had said “Could you meet me–” he declared that his second, Sir Reginald SomeOneOrOther, would be calling upon my second!

Now, I ask you — why would women flock to such an aggressive male? I cannot understand it.

And after I took one look at this Sir Reginald fellow (shown here), I decided that discretion was the better part of keeping my cravat spotless, so I smoothly departed through the servants’ entrance.

Which is why I failed to dance with any of you.

But I meant to.

For the moment, I shall be at an undisclosed location. If any frightening gentlemen ask after me, please do not share any information with them…

Yours in elegance (which must be assiduously guarded),

Bertie! I would have swooned at the opportunity to dance with you…you simply needed to wait your turn…after the mysterious gentleman in blue and Sir Reginald, that is.

To be very honest, I retired immediately to the card room and proceeded to play a vicious game of Commerce, winning one hand and thereafter giving up fish after fish.

Ah, Bertie, if my, er, escort offended you by monopolizing the fair ladies I am heartily sorry! But I can promise you will not see him again until next year…

Bertie, darling, I would have danced with you, but the other two “gentlemen” seemed to have more of the ready and after my losses to the Divine One at the card table, filthy lucre was a consideration!

Scandal? Did someone say scandal? Santa, as my dear sainted mother says “If you can’t say anything nice about anyone, please come and sit by me!”

Ah! What ease you have given my nerves!

But I still wonder…what was the mystery gentleman’s name?

I thought this rather rudely phrased, and explained to her carefully that I knew it was a man, but I wanted to know his name; but this merely prompted a repetition of the fellow’s gender.

Then the conversation wandered off, somehow, and we ended up arguing about who was on first and what was on second. But mark my words, there is some mystery here!

Yes, I’d have loved to have danced with you too, Bertie!

Do you think you might have misunderstood the gentleman in blue? Perhaps he only wanted you to be introduced to his friends, not have his friends call on your friends… 🙂

You, sir, are one straight-up player and your dance moves would best be described as “buck”, if you will…the dandies of SF have met their match! Pah, I say!