The first week in August, as soon as I returned from the Romance Writers of America conference in San Francisco, I flew off to Denver to attend the World Science Fiction Convention, a gathering of authors, artists, fans, agents, editors, costumers, musicians, and more, all to celebrate science fiction and fantasy. Whee! 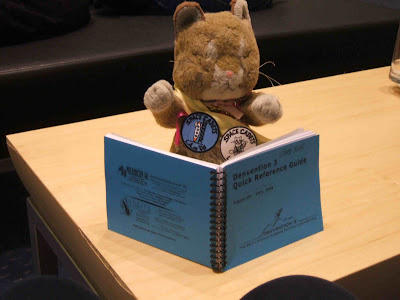 The Guest of Honor this year was Lois McMaster Bujold, who’s won award after award for her science fiction and fantasy novels (and who’s one of my favorite authors ever.)

First, I read through the program to see which panels and events I didn’t want to miss.

On the first day I attended a reception held in Bujold’s honor, called Summerfair on Barrayar.

(In Bujold’s science fiction books, Barrayar is a planet recovering from centuries of a semi-medieval existence 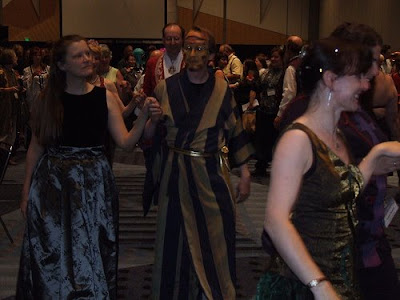 (complete with lords, duels, horses, and arranged marriages), and joining a much more sophisticated, modern galaxy in which — gasp! — starship pilots are often women, and sometimes hermaphrodites or clones.)

Some of us came in costume — and there was dancing. (Both are shown in this photo taken by the official Worldcon photographer, Keith McClune. Todd is the ghem lord in the makeup, and I’m the Vor lady on the left.)

The next day was Bujold’s Guest of Honor speech — and she made lots of interesting points about science fiction, fantasy, and romance.

Bujold also was on plenty of panels, and had two signings and two readings. (More on those later!) 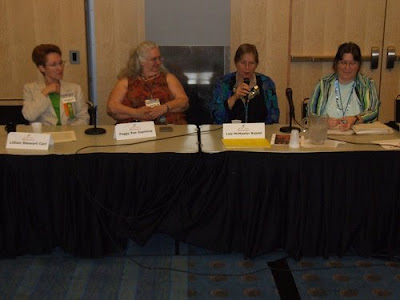 One of her panels that I found particularly interesting was a discussion between her, SF author Lillian Stewart Carl, and fantasy writer Patricia Wrede (Regency fans may know her as the author of the Regency-set MAIRELON THE MAGICIAN books or as the co-author of the SORCERY AND CECELIA series.)

Pictured here (photo also by Keith McClune) with moderator Peggy Rae Sapienza, they talked about how they had come together as a critique group back when only one of them was published, and how they’ve stayed friends through all the ups and downs of their three very different careers.

By the way, Bujold herself has a Regency link — her A CIVIL CAMPAIGN is dedicated to Georgette Heyer, among others, and is a romantic comedy in the true Regency style (with science fictional twists, of course!) 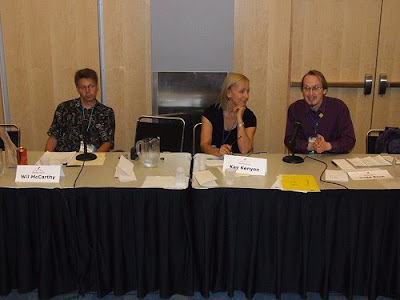 When I wasn’t worshipping at the altar of Bujold, or buying way too many books and pieces of elvish pottery, I could often be found attending the panels of a bright young fellow named Todd Brun. 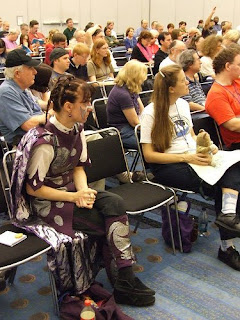 (2) photo of the rapt audience.

(Some in cool costumes.)

(Or with other accoutrements.)

(Don’t you wish you’d been there?) 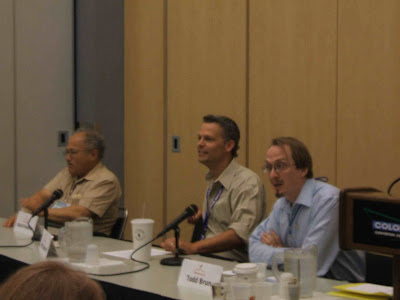 Todd was on several panels…

including one in which he explained how to build a time machine in your basement.

(See how serious he looks?)

(Because time machines are serious things.)

(You wouldn’t want to mess up and accidentally delete the human race or something.)

Todd, of course, is hard to equal…

But I must say the high point of the convention for me was when Lois McMaster Bujold read the first several chapters of the next Vorkosigan book!!!!!!!! 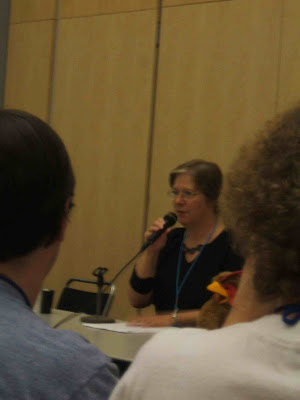 Even her editor hadn’t yet laid eyes on it.

And it won’t be published for something like two years.

reading from her manuscript…

What more could a fangirl ask?

So…that was me at Worldcon.

How about you? Have you ever been to a SFF convention, a fan convention, or similar? Have you ever read any Bujold (or Wrede or Carl)? Ever bought any elvish pottery? (I LOVE this stuff. The artist, Peri Charlifu, does AMAZING work.)

And be sure to visit us next Tuesday, when we’ll be discussing the film MASTER AND COMMANDER as part of our Jane Austen Movie Club!

23 Responses to Cara at the World Science Fiction Convention