So, I used to think RWA was the loudest, the most crowded, the most emotional group experience there was. But that was before I saw 80,000 people screaming as fireworks went off, confetti flew, and history got made. It was truly amazing. I don’t want to bore everyone here by prattling on about politics. I can only say I see now what drove women like the Duchess of Devonshire and the Countess of Bessborough (and Abigail Adams and Elizabeth Cady Stanton) to get out there and work so very hard. The idea that it’s within our power to affect real change in our lives is wonderful stuff, especially since within the space of just two generations we have come so very far (when my grandmother was born in early 1920, women still had four months to go before they got the right to vote). No matter what happens in November, I saw great things happen this week, and I will always be grateful for that. 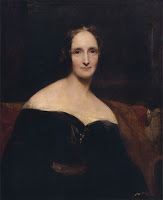 And now, I am exhausted and hoarse, running on little sleep and lots of strong tea! But I want to say happy 211th birthday to another extraordinary women, Mary Godwin Shelley. Mary Shelley was born August 30, 1797 to the philosophers and radicals Mary Wollstonecraft (who died in childbirth) and William Godwin. In 1814, she fell in love with one of her father’s political acolytes, Percy Bysshe Shelley (who was married), and eloped with him to the Continent (along with her wild stepsister, Claire Clairmont). She didn’t marry Shelley until 1816, after the suicide of his first wife Harriet and the death of their first baby.
In 1817, she spent a famous summer with Shelley, Claire, Byron, and John William Polidori in Switzerland, where she came up with the idea for her most famous work, Frankenstein. They went to Italy in 1818, where they had 3 more children (only one, Percy Florence, survived childhood). In 1822, Shelley drowned when his sailboat sank during a storm in the Bay of La Spezia. A year later, Mary returned to England, devoting the rest of her life to the memory of her husband, the upbringing of her surviving son, and literary endeavors. She died in 1851 at the age of 53.
She is mostly (only?) known now for Frankenstein, but she also wrote historical novels such as Valperga and Perkin Warbeck, and the apocalyptic novel The Last Man, as well as travelogues such as Rambles in Germany and Italy.
A couple of sources on Mary Shelley I really like are Miranda Seymour’s biography Mary Shelley and Janet Todd’s Death and the Maidens. (When I was a teenager, there was a terribly cheesy movie I rented once. I think it was called Haunted Summer, and it was fun, though I don’t know if it’s still out there! Young Frankenstein is also fantastic, though maybe not strictly in the tone of Shelley’s book…)
Happy Birthday, Mary Shelley! And happy Long Nap Weekend to me! What is your favorite Mary Shelley work?

Amanda! Congratulations on being there to see history! No matter what our political leanings, Thursday night was a very important and memorable night in the history of the United States. I am sure it must have been amazing!

Mary Shelley was an intriguing, fascinating and amazing woman. She was truly one of the great minds of her generation. The scandal of her personal life overshadowed that when she was alive to a certain degree. I have read almost everything she ever wrote.

Lets face it, it was the ultimate act of audaciousness to actually put to paper Frankenstein. It was such a searing journey into the most fundamental fear man has – the fear of death and the one quest that has both haunted and frightened man since time began – does man dare to play God.

Amanda, I watched the convention and looked for you, but I didn’t see you. I sure thought of how it would feel to be there, though.

One thing about Mary Shelley and Frankenstein I love is that she started writing it during the “Year Without A Summer” 1816, when the weather kept her, Byron and Shelley housebound. They dared each other to write scary stories, but it was only Mary who actually finished hers. Somehow I can imagine that – the men all gung ho, then getting bored with it and the woman taking on the challenge and seeing it through.

Louisa, I think I may have gone to high school with one of the DNC speakers Lily Ledbetter, who hailed from Jacksonville, ALABAMA. Either that or one of her relatives. Ledbetter was one of those “Jacksonville” names.

“Amanda, I watched the convention and looked for you, but I didn’t see you. I sure thought of how it would feel to be there, though.”

I KNEW I should have gone with the giant hat! It’s so hard to stand out among 80,000. 🙂 It was probably much easier to see and hear on TV, but I loved seeing how very moved and excited everyone was.

Now back to work.

It is really cool that you were part of history like that! And even without a time machine. 🙂

I must admit to my shame that while I’ve known the story of how Frankenstein came to be written, and I’ve seen more than one film adaptation, I’ve never read the original! I have the ebook on my PDA, so it is on the electronic version of my TBR pile, but I haven’t gotten to it yet. One day! After all, Frankenstein is an inspiration to mad scientists everywhere.

Ooh, Todd, a book I’ve read that you haven’t! I thought the novel of Frankenstein was really not what I expected…but very interesting. (The creature was so much more articulate in the book than in the movies!) 🙂

Amanda — so cool you were there as history happened. This certainly is a historic year politically, for many reasons!

Wow, you were actually there? Yep, just by watching it on tv (well, actually online LOL), it sure looks plenty partyish, but loud too. . . very enthusiastic croud, alright!! 🙂

I didn’t read “Frankenstein” until college, and was also very surprised by it. It was so much–deeper than my impression from movies and outlines. I was glad that class made me tackle it finally!

Amanda, every time I saw someone at the convention in a gaudy hat, I thought of you!

The only Shelley book I’ve ever read was Frankenstein, which I read in college as part of a freshman English seminar called “The Fairy Tale and 19th Century Gothic Literature.” And I have to admit I wasn’t crazy about it–I had more fun with Wuthering Heights and Dracula.

What an amazing experience you had in Colorado. Talk about electricity. I hope you are getting all the rest you need.

I’ve never read anything by Shelly but the more I learn about her, the more I am intrigued by her life and her works.

I did enjoy the movie adaptation with Kenneth Branaugh (sp).

And ‘Young Frankenstein’, well, is a discussion for another day!

An even better cheesy movie is Gothic by Ken Russell, with Gabriel Bryne as Byron, Natasha Richardson as Mary Shelley, Julian Sands as Shelley and some actress who fell off the radar as Claire Clairmont.

An even better cheesy movie is Gothic

Elizabeth, I’ve always meant to watch that, but I confess I never have! And it even has music by Thomas Dolby…. (And I think I own it!)