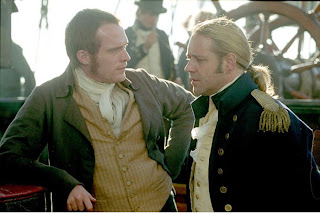 Welcome to the September meeting of the Risky Regencies Jane Austen Movie Club!

(And I apologize for our last-minute cancellation last month — I’ll blame it on my cat, as soon as I think how.)

Today, we’re discussing the feature film MASTER AND COMMANDER: THE FAR SIDE OF THE WORLD.

Have you seen it?

If so, what did you think?

For those of you who’ve read some or all of the O’Brian books, did the movie satisfy you? Annoy you? How?

For those who aren’t familiar with the Aubrey/Maturin books, how did the movie work for you? Did it make sense?

To aid the discussion, the major credits follow, with some “you may have seen this actor before in this” in italics…

Based on the novels of Patrick O’Brian 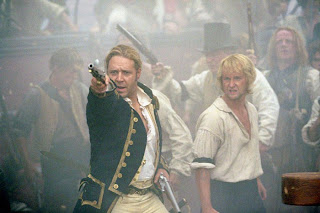 Bettany will play Lord Melbourne in the upcoming THE YOUNG VICTORIA. He was also Prince William of Orange in SHARPE’S WATERLOO.

Does the handsome first lieutenant look familiar? James D’Arcy played Tom Bertram in the most recent MANSFIELD PARK adaptation, and Nicholas Nickleby for television in 2001.

McCabe also played a naval man in the Root/Hinds PERSUASION — he was Captain Benwick. He was also Mr. Brocklehurst in the 2006 JANE EYRE, and will appear as Sir James Hare in the upcoming THE DUCHESS. 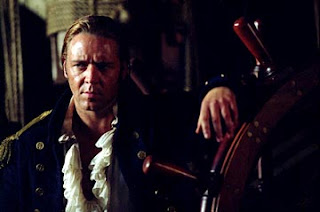 Boyd, of course, was Pippin in the LORD OF THE RINGS movies.

Morgan was William Price in the recent MANSFIELD PARK.

Cara
Cara King, who isn’t even master and commander of her cat

I loved the movie…even though I’d not read the books yet, it did make great sense to me. The setting was so beautifully created.

I adore sailing ships, and the movie really gave me a desire to learn more about the age of sail. I cared about the characters and especially had a soft spot for the two Lieutenants. 🙂 I would love a sequel, and now that I have read the books, can see easily where they could go.

Oh well, never got to see it, and I haven’t read the books. . . but there is one thing I can comment on — we’ll never be master and commander of our cats. They will always be so of us. 🙂

I liked the movie. I was in awe of the historical detail; the performances were excellent.

I don’t like the episodic nature of O’Brian’s novels (nor of Gabaldon’s) but that is mere preference on my part. O’Brian’s attention to historical detail is wonderful.

I thought this movie had a little of that lack of the typical story arc, but otherwise I liked it.

I remember a review that went along the lines of “This is SO not a date movie, but guys will love it!” and I think that’s about right. I didn’t manage to sit all the way through, but remember being impressed with the boy who played the young lordling who needs an amputation, and feeling wussily faint at the ‘lesser weevil’ joke, and thinking during the battle scenes ‘how the hell can anybody understand what is going on amid all the smoke and flame and cannonfire and screaming?’

I haven’t read the books (yet) so can’t comment on how faithful the movie was in plot or spirit.

I saw the film when it came out and enjoyed it, especially the historical details, though I’ll admit the gritty reality of the living conditions would make me think long and hard before trying to write a naval romance. Not to say I’d never do it, though!

The other thing that struck me was how isolated a ship could be, and the pressures on a captain to maintain morale and discipline under the most trying of conditions.

Cara, the cats ARE Masters and Commanders in this house! Hence my return to Wal-Mart last night after returning home from work. I didn’t realize I was out of Bagheera’s food and he won’t eat anything else. God forbid my 24 pound cat go without food for 24 hours!

I have not read the books, but I did see the movie and I loved it. Very gritty and realistic and the visit to the Galapagos was great.

The performances were wonderful and I found their ability to carry a story with no female characters pretty amazing.

The details were intriguing and the battle scenes were great. Love a good sea battle even if it looks like nothing more than chaos in uniform!

I really love this movie. I think Weir wanted, along with the story, to basically give us a slice of life in the British navy at the time… He doesn’t explain everything (by a longshot), and I think that allows him to have tons of complicated relationships and details that shape the story — and making rewatching it very satisfying.

BTW, there’s a companion book by Tom McGregor which I find enlightening and great fun to read.

Anyway, I think the film is an amazing achievement, with vast depth and texture, and I think it should have drawn more notice when it came out… (I suspect that if many Oscar nominations had come, it would have…but most of the members of the Academy are actors, and this is an ensemble movie, and I think no one chews enough scenery for the Oscar voters to take notice….)

Master and Commander is one of my all-time favorite movies, and I have read the books. I thought the movie did a good job of capturing the flavor of the books in a very different format. And I love Russell Crowe and Paul Bettany.

Incidentally, I had to drag my husband kicking and screaming to see it. He, I kid thee not, called it “a chick flick”–which in his mind period piece war movies are, because his chick gets so hot and bothered by them! (I have strange tastes. My desert isle movie list is all either VERY masculine–Master & Commander, Lord of the Rings trilogy, The Shawshank Redemption, Glory–or else total romantic comedy, namely Bull Durham, Dave, and The American President. Well, those and Persuasion and the A&E Pride & Prejudice.)

Incidentally, DH loved the movie and agreed with me that it deserved the 2003 Best Picture Oscar. (We both thought Return of the King was the weakest of the LOTR trilogy, and that Fellowship and Two Towers should’ve got the Oscars in their years.)

I love the scenery chewing analogy, Cara, and it is spot on. Visually and emotionally Master and Commander was a flawless film, but because there was no “STAR” save the cinematography, the Hollywood crowd did not appreciate it.

Will definitely have to look that companion book up as I really enjoyed this film!

I have the dvd, but I haven’t seen the movie yet. I love James D’Arcy. I didn’t know he was in “Master and Commander.”

I loved this movie, the only one I’ve ever seen with Russell Crowe that I liked (and Paul Bettany was his usual adorable freckly self). Great use of music, too, and Aubrey and Maturin actually looked like they were playing their instruments, which is very unusual in the movie.

The real star of it for me was Max Perkis as Blakeney–that kid is a fabulous actor.

I really enjoyed this film though I was vaguely annoyed. It suggested there would be a sequel. They have left me hanging.

I did enjoy the accuracy and depiction of the brutality of the British Navy. Some superior performances are delivered to, Paul Bettany.

I’ve never read O’Brian so I can’t comment. I would love love to see more films of this nature.

Count me as another who loved this movie! It was very realistic, yet also engrossing. I agree with Janet, it’s possibly the only Crowe movie I’ve liked. 🙂

The companion book is also great. I used it for help with the one naval hero I ever wrote!

Well, I have read the books, and I loved this movie. I thought Russell Crowe was spot-on as Aubrey, and while Paul Bettany is not physically much like the Maturin described in the books, he captured much of his character. The chemistry between the two of them was terrific, as old friends who don’t always agree with each other but still greatly like and respect each other.

And the period detail! It was fantastic. I’ve never seen a film that came close to portraying so well the crowding and the isolation aboard a warship; what it was like to receive a broadside from another ship; the sheer physical labor and expertise needed to control this huge hunk of wood and rope and canvas. And so beautifully filmed.

In fact, I remember only two things that annoyed me:

1. The movie takes its title from two books in the series, the first (Master and Commander) and the tenth (The Far Side of the World), and borrows from several others; but in this movie, Aubrey clearly isn’t a Master and Commander, but a Post Captain!

2. Because the film borrowed from several books, it becomes a little harder to create sequels to it. Not that there have been any.

I suspect that if many Oscar nominations had come, it would have…but most of the members of the Academy are actors, and this is an ensemble movie, and I think no one chews enough scenery for the Oscar voters to take notice.

Well, it got ten nominations (including best director and best picture) and won two (cinematography and sound editing), which isn’t bad.

Oh, love this movie! Thought they did just an amazing job at giving us a glimpse of the grim reality of life at sea.

And I’m so glad to know I’m not the only one who doesn’t swoon over Russell. This is the only film in which I’ve “got” his appeal, and I think it has more to do with Jack than with Russell. Although I did love the fact that he learned to play an instrument for this role!