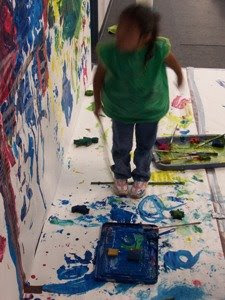 Do you see a theme here recently? I do. We’re returning to our homes after the excitement and excursions of the summer and normal life is picking up again.

Despite starting at a new job this week, this is pretty much how I feel. For the first time I’m about to get an office, and have been engaged in a slum clearance project on my daughter’s room. Yes, she moved out. Yes, a large amount of stuff was left behind. I plucked out books and useful stuff from the debris and started to spackle. And spackle some more. And sand. Looked at it in the morning light (it faces east and south) and discovered some more holes in the wall I missed, but unfortunately at that point I was putting on primer.

My husband peered through the doorway after I was done for the day and pointed out places I’d missed. He’s so helpful like that. 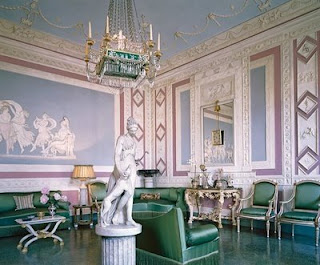 And the end result? Probably not like this. I just find this a wee bit pretentious, as much as I like Wedgwood, and my room is much, much smaller. I also doubt whether I’ll have the time or patience to become a master plasterer and this does look rather chilly and formal.

Rather, the room will be painted a luscious cream–the color is actually called creative thought, which I hope is what will happen when I’ve moved the computer, the desk, lots of books and other stuff currently cluttering up the house, and have no excuse but to write. The woodwork will be a glossy white. Eventually the carpet will be cleaned. Maybe by that time I’ll have learned how to use the digital camera–I did take a couple of pix of the room during the clean out–and show you the finished project. 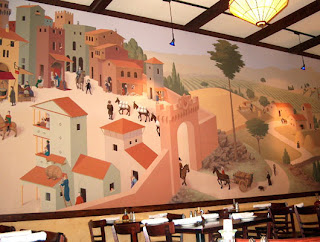 I also wanted to boast about the creative work done by my inlaws at Mullany Art Studios. This is a mural they did for Argia’s Restaurant in Falls Church, VA. Isn’t it amazing? Yes, they accept commissions for murals and will include your pets if you like.

Do you have your own space in your house where you can read and/or write? Are you bitten by the decorating bug or engaged in any home renovation projects? And how messy do you get when you paint?

I am in the process of renovating my writing space. I have chosen the living room as it is the biggest room in the house, has the best light, the most windows and a fireplace. It is definitely a work in progress. The desk is situated, however, where I can see the landscape and wildlife outside so I like it.

This whole house is a work in progress at this point, as is the five acres on which it sits. And when I paint I get VERY messy, Janet. The only good thing? There is nobody here to say “You missed a spot!”

Janet, how exciting to be setting up an office the way you want it, Wedgewood or not! I love the sound of your paint – creative thought – I need to paint my whole house in that color!

I did clean up my book room one day recently, but that meant merely clearing the floor and organizing the stuff stacked along the room’s edge. Luckily I never write in there. I am addicted to my laptop and doubt I could sit at a desktop or a desk anymore.

I was in the “book room” yesterday searching for a book I know I own, and had the thought that organizing the bookshelves according to subject would be a good idea. It once was that way.

I still have my daughter’s old stuff in her old bedroom (as well as her new-old-stuff in the basement). Do you think there is a chance she will go through all that junk and clean it out?????

Um…I just read that over. Perhaps the little apple did not fall far from the tree…..

That Wedgewood room is lovely! I’d like to maybe go to tea there, but not live in it. I would be too scared to move.

I have a tiny, cozy house, and the only space for an office is the breakfast nook between the kitchen and living room. It’s a mess, but I like it! I need to paint, but that would mean moving the stacks of books away from the walls. Ugh.

I don’t have a room of my own (my apologies to Virginia Woolf) but I am working towards that. Right now my writing space shares the same space as the home computer, my husband’s photography stuff, the TV and dog. Sigh. Unfortunately, my kids are too young to move out on their own and so I can’t commender their rooms – yet.

On the home decorating front, my bedroom windows have shades but no curtains and my hall bathroom has had most of the wallpaper stripped – for about four years.

Sigh. Time to call the professionals.

I’ve been to Argia’s and seen the mural! Didn’t know at the time that there was a connection to Regency romances, however.

As for space, I can read most anywhere so don’t have a special place. I do love the morning light in my bedroom, so often sit in a chair there, or in the afternoon migrate to one of the couches in the living room, one of which is the most comfortable couch ever. My husband has a study, since he needs to both read and write (he’s a policy wonk). It has big windows on three walls and looks out over the back yard, so he’s happy. He’s also happy because it has a door so he can shut it so I don’t have to see that it’s always knee deep in papers. What I don’t see doesn’t bother me, so we’re both happy.

In theory the finished basement in our house is supposed to be my workspace, but so far it hasn’t worked out that way because we’ve had trouble getting the wireless network to cover the whole house. Maybe I should be writing there, the better to not be seduced by the siren song of the internet when I’m supposed to be writing…but I wouldn’t be able to do what I did last night and quickly google “commercial fish English Channel” when I need some stray detail.

So I write on the couch or on my bed, whichever happens to be the quietest spot, with my new “baby,” Wellington the Laptop, perched on a cushion in front of me.

I love your inlaws’ work, Janet. That’s a beautiful mural.

A few years ago we redecorated our guest bedroom/home office to be more home office, less guest bedroom by replacing the bed with a sleeper sofa and using the new space for a desk and built-in bookshelves. It’s mostly mine though my husband invades on weekends to do household paperwork.

Our current project is redecorating my oldest child’s room, replacing the hot air balloons I painted on her walls (cute though nothing so professional as the Mullany work) with something that should work until college. She picked out bedding in a purple, aqua and chocolate brown pattern, which sounds odd but looks very chic. We’re going to coordinate the rest of the room around it, once the back-to-school chaos settles a little.

Hope the new job is going well, Janet, and may the rest of the redecorating go smoothly!