So, last week was the season premier of Gossip Girl, IMO the second greatest show on TV right now (behind only the sublime Mad Men. When Pushing Daisies comes back on, it may drop to third. We’ll see). The premier was great. Hamptons summer fabulosity, complete with beaches, tea on the lawn, croquet, and a big snooty party! Serena and Dan back together! Nate having a torrid affair with an older married woman! Lots of Blair and Chuck bickering (my favorite)!

Best of all, Blair’s new flame is a British lord. Oh, at first he tried to pretend to be a “normal American guy” from Princeton (or Georgetown), until Chuck’s PI (of course he has a PI on speed dial–he’s Chuck Bass) put an end to that deception. I am really looking forward to seeing where this storyline goes, though the preview of next week’s episode doesn’t give me confidence in their proper title usage. 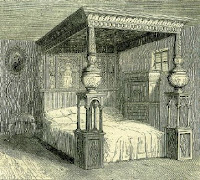 There are, of course, no virgins on GG (not since Blair lost hers to Chuck in that limo). None on Mad Men, either, now that I think about it. But I did run across this article on the Guardian’s book blog about Top Ten Literary Virgins. Yes, authors who did not squander their energies in the back of limos or on futons under fake snowstorms. No, they used them for Art. Or whatever.
The list includes: Jane Austen (natch), Emily Dickinson (double natch), Queen Elizabeth I (who wrote poetry as well as, y’know, running England), Henry James (I did not know that; interesting), Gerard Manley Hopkins, Yeats, Shaw, Christina Rosetti, and Anne Widdicombe (MP and novelist). 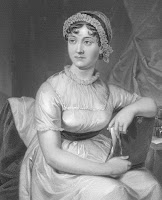 The article says about Austen, “Despite the ‘quite a bit of sex’ smeared on her life and work by the biopic Becoming Jane and virtually all the recent screen adaptations (notably the obnoxious Mansfield Park), the author of Pride and Prejudice…died intacta. All 6 of her major heroines are as virginal on the last page as they were on the first. Does the fact that Austen ‘never had it’ make her a greater, or lesser, writer? Is chastity the enemy of genius?”
Huh. I dunno. Not in the case of Austen, for sure. What do you think?
Who are some of your favorite ‘literary virgins’? And what TV shows are you looking forward to this Fall?
Be sure and join us tomorrow when we welcome back Christine Wells! She will dish about her latest book, The Dangerous Duke, and give away TWO copies to lucky commenters…
Posted in Risky Regencies | Tagged Uncategorized | 12 Replies
0 0 votes
Article Rating
Subscribe
Login

Huh. . . well, I’d have to go with Jane. . . this is definitely a subject I haven’t thought about much, and really don’t know who is and who isn’t, so out of the list, Jane.

I would have to go with Jane as well. Perhaps she had such great insight into the emotional side of romance because she didn’t have the sexual information to distract her?

And Lois, that IS a good question on Elizabeth I. With all those hot guys she had around her, one does wonder!

It’s a very interesting question, and of course now no one can know for sure (though lots of people speculate!). I have a professor friend who is convinced she was so traumatized by the idea of sex and marriage as a girl (all those beheaded and disgraced mothers and stepmothers, plus being chased by that fool Thomas Seymour) that she wouldn’t have. I tend to wonder about practicalties–there were alsways so many people around, such a lack of privacy, could she have ever done it without people knowing for sure? But she did have favorites (and a decades-long relationship with Robert Dudley), and liked a bit of a flirtation. So, who knows? 🙂

I did noticed once I looked a little deeper into that list that some of the people are not technically not “virgins,” just would prefer not to.

Okay, sorry about that ungrammatical comment! It is early and I have not yet had my tea. 🙂

“great insight into the emotional side of romance because she didn’t have the sexual information to distract her?”

Very true, Louisa! I definitely think that being free from most domestic duties and from constant pregnancy, as well as the emotions of her own marriage, freed up creative energy and just plain time.

Gosh. I haven’t really been privy to the private lives of the literary. I have read two biographies of Jane Austen though.

I think the premise that lack of sex resulted in wonderful literary productions is nonsense. Jane Austen was great because she was great, not because she was a virgin. Her ability to observe human nature and her keen understanding of story would have been there even if she’s done the deed.

Amanda, your point that she might not have had time to write had she been married and producing babies is a good one, though. That makes sense to me!

The TV show I’m looking forward to most is Pushing Daisies. I can’t wait!

I’m also very keen on Heroes. And Lost, too, though I suspect that won’t begin for a while…

Funny, I thought Penny from Mad Men was a virgin before, well, you know.

I am surprised to see that Henry James was…really?

And please send my best to Christina Wells. I’ll be at our fund raiser tomorrow. I had the pleasure of both meeting her and reading her first two books since San Fran. And I adored them!

Hello Riskies and Risky Friends. I’m back from my travels, buoyed up and content.

I was under the impression Bess I was a virgin queen b’cos of the vow of chastity she took.

I had no idea Shaw was a virgin. He and his other friends like Russell and Yeats were rumored to be vegetarian, forward thinkers, and gay; but no whispers about his virginity. Gandhi was part of that group for a bit while he was in England doing his law degree.

Just as, when authors write about the physical side of love, they’re not writing about their own life, but rather, imagining their characters’ lives, I believe Jane did the same. Imagination doesn’t need to be informed by experience (or lack thereof).

I do agree with Diane and Ammanda about not having a family gave her time and space (in her mind) to allow her creativity to flower.

an interesting topic. i suppose it’s sexist, but it seems more surprising to learn of such status in a man than a woman.

Weren’t the Brontes virgins? With the dying young and all? I seem to remember Charlotte was the only one who married, and that was late in her life, after she’d written Jane Eyre.

Lois – lol, the Elizabeth I debate has been going for 400+ years and shows no signs of stopping 🙂

I knew that Shaw, despite being married, was not one for the flesh. All you have to do is read any of his plays to figure that out. I had no idea about Yeats, although he was in love with Maud Gonne for years, who would never have him. With Henry James, there has never been a whiff of him with either me or women, so I think he was pretty asexual like Shaw.