Riskies: Hello, Christine! Welcome back to Risky Regencies. Tell us about your new book, The Dangeroue Duke. Where did the inspiration for this story come from?

Christine: First of all, let me say how delighted I am to be with you all here at Risky Regencies today. I read this blog often. You’re all so knowledgeable and often in surprising ways! Thank you for inviting me.

And here’s the blurb for The Dangerous Duke:

When Lady Kate Fairchild threatens to publish a tell-all politcal diary if her brother isn;t released from jail, she meets a formidable adversary in Max, the Duke of Lyle. Max believes Kate’s brother knows the whereabouts of the rebels who burned his family home. Stealing the diary, he spirits Kate off to a country estate, ransoming her for her brother’s cooperation. But the wrong diary has ended up in Max’s hands–a sizzling account of Kate’s affair with a fantasy lover. And when Max discovers Kate’s sensual desires, he can’t resist exploting them in every way…

I’m talking about this a bit more on our historical author chat on the Berkley/Jove Bulletin Board, but most of the inspiration for this book came from snippets I’ve learned in the course of my research. I wanted to explore the way a woman might wield power in the Regency era. As in any era, there were a lot of women who were heavily involved in politics, even though they couldn’t vote. They filled that ‘woman behind the man’ role, and it’s not stretching the imagination to assume that some of these women were far more intelligent and politically astute than the men they supported.

Lady Kate, my heroine, is comfortable in that politcal arena and her family has influence, which is why her late husband, an aspiring politician, married her. But when Kate is widowed, she’s left without that figurehead. She has to step out and wield that power she has in her own right to save her brother from unjust imprisonment.

As for many historical writers, the story of courtesan Harriette Wilson demanding payment from her former clients to keep their names out of her tell-all memoirs captured my imagination.

Lyle desperately wants that political diary. But the two volumes get mixed up with, um, interesting results!

You can read Kate’s diary (edited by Lyle) here.

Riskies: And the hero sounds wonderfully tormented! Tell us a little more about him. Is this your favorite “hero type”?

Christine: Lyle doesn’t think he’s tormented at all, LOL! Others might disagree, however. He’s a man who entered the secret service through neccesity, not out of the thrill of it or even from a desire to save his country, though that is part of what keeps him there. He does what has to be done and his mantra has always been ‘the end justifies the means.’

And then a fire at a family gathering kills the heirs who stand between him and the dukedom. His last case is to find the perpetrators, and then he is going to retire to assume the many duties of his office. But now he has to learn to be a civilian, and it isn’t easy. The last thing he wants is to fall in love with a troublesome woman who has made herself his enemy! But the driving need to earn Kate’s love is what forces him to change.

I do seem to be gravitating toward big alpha men at the moment, but it’s not a conscious decision. It depends on what the story demands. Lyle is incredibly tough, except when it comes to kate wrapping him around her finger!

Riskies: What was the research like for this book? 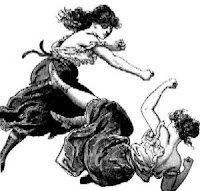 Christine: It was quite eclectic–from the political and social climate surrounding the first inklings of the Industrial Revolution, and the little we know or surmise about agents, to female boxing in the Regency. I wrote a small article for the Regency Reader about women’s boxing, and I will put it on my website. Or if anyone is interested I can email them more information.

Riskies: What’s next for you?

Christine: I am so excited about my next project, Wicked Little Game! I won’t talk about it too much yet, but it has a wonderfully tortured, big, dark hero and a heroine who is one of the most interesting and difficult women I’ve written. There’s a teaser in the back of The Dangerous Duke under it’s working title Indecent Proposal.

Riskies: And now for something else! Some fun questions I found in designer interviews in “Elle” magazine. đź™‚ 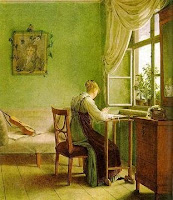 Thank you for having me here, Riskies! It’s been a pleasure. And to all your readers–do you like your historical heroes dangerous? What about your heroines? Do you like the idea of a woman finding her own power in the Regency era, even if she might not be as physically strong as her mal counterparts?

And I’ll be giving away two signed copies of The Dangerous Duke to lucky commenters!

44 Responses to Christine Wells and the Dangerous Duke!