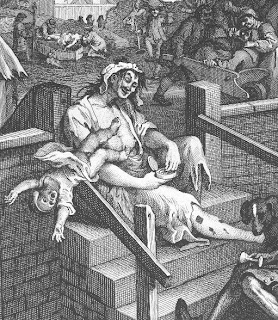 This weekend, my husband and assorted friends and I will be trotting onto a ferry to Block Island (off the coast of Rhode Island). The Ready For A Party Spouse suggested we bring cocktails onto the ferry, and since I am feeling slightly wistful about the end of summer, I suggested the most summeriest of cocktails, gin and Fresca (also one of the most white trashiest cocktails, I think, but that’s not why I asked for it).

Gin has a rich and storied history in the Regency; known as ‘blue ruin,’ gin became popular in England when the government allowed unlicensed gin production along with insisting on a heavy duty for imported spirits. According to Wikipedia, “by 1740 the production of gin had increased to six times that of beer, and because of its cheapness it became popular with the poor.” Eventually, of course, the British government realized they could be making more money, and enacted the Gin Act of 1736, resulting in riots, massive illicit distilling and the cynical marketing of “medicinal” spirits with such fanciful names as Cuckold’s Comfort and My Lady’s Eye Water. Because of its ease of production, gin was often mixed with even worse ingredients, and might have caused higher death rates.

The gin they drank back then–at least the gin that started it all–tasted different from the Gordons, Bombay, Tanqueray etc. East Coast elitists sip with their tonic on the golf course. The original gin was Genever, or Holland gin, is “Richer, maltier, and with a greater depth of flavor” than today’s gin, and from some accounts, gin elitists (not the same as E.C. elitists) mourn the loss of the earlier type of gin.

But then I saw that Amsterdam-based spirits company Lucas Bols is doing a global relaunch of Bols Genever, which is made from a recipe the company was using in 1820. New York liquor stores will start stocking Bols Genever at the end of this month, with stores in San Francisco and London to follow shortly.

Having read of the devastation gin caused in our period, now I’m not so sure I want to be drinking the stuff this afternoon, but I am interested in tasting Bols Genever, just to see if I can detect a difference in the flavor.

Do you have a favorite cocktail, either for summer or fall? Are you interested in the shadier aspects of Regency life? Do you like to try period-authentic flavors?

PS: Apologies again for not coming back to comment, I will be on the road most of today.
*Fagin to Oliver in Oliver Twist

Pimm’s is my favorite and is gin based. I once made Pimm’s for a Kentucky Derby party and it was gone before the Mint Juleps were. I also love both white and red sangria. My mom was a huge gin drinker both gimlets, gibsons and martini’s, so I grew up with Tanqueray.

I would love to try absinthe! (though I doubt the new, trendy stuff is anything like the old stuff, like in that Degas painting)

I’m such a novice when it comes to ordering drinks. I just don’t do enough of it, I guess. I have learned to ask for a Mojito, which sounds more trendy than my ususal Marguerita.

Ooh, Amanda, if you come to New York again, we’ll have to go downtown to this Absinthe bar and try it.

I’m a gin girl. My favorite gin is Hendricks. It’s Scottish, and very light (no lime, please; better served with a slice of cucumber). A Hendricks G&T sets me up just perfectly, but I’m also a big fan of the Negroni (2 parts Campari, 1 part Gin, 1 part Sweet Vermouth).

You can still get Dutch-style gins, you just have to look for them. I served and aged one at my Georgian Gentleman’s Tipple workshop. It was rather like whisky.

Kalen, the Gentleman’s Tipple workshop was excellent, as was the gin you served. Although the whisky was my favorite.

I’m in a “be kind to my liver” phase, but I have been to websites that tell how to make old-fashioned absinthe from wormwood in one’s closet. I’m fascinated by how cultural mythologies grow up around certain things, and that includes the Green Fairy. The artwork alone is great.

I do like to try period-authentic things — but period gin scares me, I admit!

My father used to sing a song (or at least the beginning of a song) which I’m sure dates from music hall days:

I rather like the sound of gin and fresca.

I am always interested in the shadier parts of the Regency. Then again, ANYTHING Regency fascinates me.

I have tons of research on absinthe as I have novel outlined (not written) in which a character is a hopeless absinthe and opium addict. The history of absinthe and the legends around it are fascinating.

I don’t drink. Never have. Almost 50 years and not one sip of alcohol. I’m half Native American (my Mom is FBI – Full blooded Indian) My father was three quarters Welsh and one quarter English and came from a long line of alcoholics. He quit drinking the day he married my Mom. For me it was never a moral issue. I have tended bar and am told I make a terrific tequila sunrise. I simply decided that as a hedonistic type – a musician – I really didn’t need to risk it, especially with my genetic background. Musicians tend to indulge in complete devotion to music, sex, and food/drink – not necessarily in that order at any given time!!!

That said, the moment I sell my first book I WILL take my first sip of champagne!!!!

In the meantime, I am a big fan of non-alcoholic daquiries!

“Ooh, Amanda, if you come to New York again, we’ll have to go downtown to this Absinthe bar and try it.”

Oh, yes, definitely!!! I am hoping to make it back next spring, and will hold you to that. 🙂

“but I have been to websites that tell how to make old-fashioned absinthe from wormwood in one’s closet.”

I don’t drink much nowadays. When I order a mixed drink, I usually go for Campari and soda with lime (or lemon). It sounds sophisticated, but it is drinkable by soda-swilling barbarians like myself. 🙂

When I used to perform improv comedy for free drinks and tips I usually wanted to get the most bang for my free buck, and I ordered things like grasshoppers that can pass as dessert.