Some good news for those of us who enjoy the shorter “traditional” Regencies! Signet/NAL is going to start re-releasing some older titles next year, in the form of of two-stories-in-one-volume omnibuses. Coming in Fall 2009 (just in time for Halloween!) you can find my two “ghost Regencies” One Touch of Magic and A Loving Spirit. In the meantime, look for the holiday anthology A Regency Homespun Christmas in October!

“Composing gives me great pleasure…there is nothing that surpasses the joy of creation, if only because through it one wins hours of self-forgetfulness, when one lives in a world of sound” –Clara Schumann

And today is the 189th birthday of composer and pianist Clara Wieck Schumann, who was born September 13, 1819 in Leipzig. Her father (a rather, er, difficult man who was eventually divorced from her mother, a singer) was a renowned piano teacher. Early on he saw his daughter’s talent, and Clara gave her first concert at the age of 7 playing duets with him. She gave her first solo concert at the age of 11 before going on tour. She was known for playing her own compositions as well as Chopin, Mendelssohn, Scarlatti, Bach, Mozart, Beethoven, etc. (She performed for Goethe, and gained in him a new fan. He presented her with a medal inscribed “For the gifted artist Clara Wieck”) 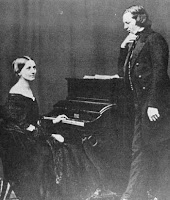 In 1830, her father had a new pupil, the former law student Robert Schumann. By 1837, Clara’s career was blossoming (her Soirees musicales Opus 6 was particularly popular), and so was her romance with Robert. Her father did everything in his power to prevent their marriage, forcing the lovers to take him to court. They finally married on December 12, 1840. Clara went on composing and performing, despite having 8 children and taking charge of their household finances and duties due to her husband’s mental instability.

Following Robert’s death in 1856, she continued performing and teaching, and in 1876 was appointed teacher of the piano at the Hoch Conservatory in Frankfurt am Main, a post she held until 1892. She played her last concert in 1891, and died in 1896

Yeah, that is terrific news about the rereleases!!! 🙂 I just have to be careful on watching what I might already have. LOL 🙂 As for composers and music, I really don’t know them a whole lot, other than your usual Mozart, Beethoven types. . . I just listen to alot of classical/instrumental music, and if I like it, I like it. . . so half the time I’m actually quite clueless as to who I’m listening to. 😉

“just listen to alot of classical/instrumental music, and if I like it, I like it. . . so half the time I’m actually quite clueless as to who I’m listening to.”

LOL, I do this, too! I even used to work at a classical music radio station, but unless I hear something a LOT and hear it identified, I can often not remember what was what. But I do listen to it all the time.

As for other re-issues, I’m not sure who else will have releases next year, though I did hear Barbara Metzger and Diane Farr will both have old-new books out early in 2009.

Can’t wait for the rereleases to come out! Kudos on that!

Clara Schumann is one of my favorite musicians. She influenced so many young musicians, including young Johannes Brahms who started as he husband’s protege. She was one smart, capable woman who had to deal with an increasingly unstable husband.

There are so many composers I love. Some British composers I am particularly fond of are John Dowland, Thomas Arne, and Ralph Vaughan Williams. Gilbert and Sullivan are loads of fun too.

My favorite composer to sing is Mozart. His music is challenging, but really singable.

What an inspiring woman. When I hear stories like this I am reminded not to feel like I’m doing all that much, picking up after only three juniors…

I love to listen to classical music, too, but, like Lois, I usually can’t identify who I’m listening to.

In my writing, some of the Strauss waltzes and Holst’s The Planets have been inspiring. I concocted a whole (unwritten) book to The Planets!

Ooh, love the Planets. .. well, okay, I just listen to Mars. 😉 Sure, it started off because, hey, nice title and nice subject, but sure liked it regardless! 🙂

Yay on the Signet reprints! And what a smart pairing of books!

BTW, speaking of anachronisms…I wrote my first Regency while listening to the soundtrack to STAR TREK: THE MOTION PICTURE. 🙂

Coming in late to comment that I find the relationship between Brahms and Clara fascinating–talk about unrequited love!

I was raised on classical music so I can usually indentify pieces, or at least the composer, within a few measures, unless it’s something really unusual. A little-called for skill, to be honest, tho it impresses my husband (who’s even better at it than I am).