And now…by popular demand…and against the express wishes of my cat…I bring you the almost complete
Part the First
of
THE RIME OF THE VULCAN MARINER: 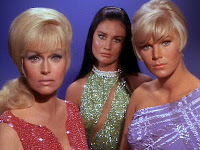 (N.B: the beginning of this appeared in an earlier post.)

It is a space-age mariner,
And he stoppeth one of three.
“By thy verdant skin and too-sharp ears,
Now wherefore stopp’st thou me?

The star bar’s doors are opened wide,
And I’m expected in;
My skirt is small, my hair is tall,
And Kirk will buy me gin.” 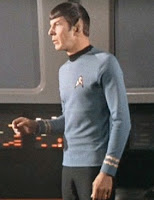 He holds her with his skinny hand,
“The Enterprise–” quoth he.
“Hold off! unhand me, blue-shirt loon!”
But Spock cannot agree.

He holds her with his mental meld–
The busty babe stood still,
And listens like a three years’ child:
The Vulcan hath her will.

With Captain Kirk forgotten now,
She listens full of fear;
And thus spake on with logic cool,
The man with pointy ear.

“The ship was cleared, no Klingon feared, 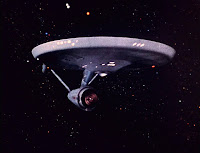 Steadily did we warp
Beyond the Earth, beyond the moon,
Beyond Tau Ceti Four.

“The ship that’s trapp’d in solar heft
Is quite a sight to see.
It shines so bright, that time’s not right
And muons all go free.

“Higher and higher every day,
Till every moment’s noon–“
The leggy babe then missed the rest,
For she heard a tribble croon.

“Jim Kirk hath paced into the bar,
Yellow his tunic’s sheen;
Quaffing a glass of Scotty’s best —
I know not, but it’s green.”

The guest-star fair, she tore her hair,
Yet she cannot choose but hear;
And thus spake that half-Vulcan man,
The space-age Mariner. 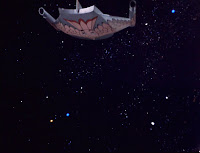 “And now the Klingons came, and they
Were tyrannous and strong:
They struck us from their ships with wings,
Which to Romulans once belonged.

With failing shields and flagging warp,
As who pursued with phasers sharp
Beholds the bridge dissolve to quarks
With wormholes straight ahead,
The ship drove fast, loud roared the blast,
Into the sun we fled. 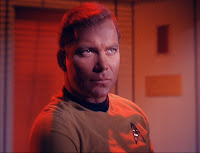 And now there came the photon blow,
And it did wondrous hurt:
And tongues of fire made us a pyre
As red as Scotty’s shirt.

And while we stewed, the Klingon crew
Did fire unending blows:
They knocked out Rand and Sulu too–
And singed the captain’s clothes.

They hit us here, they hit us there,
Till only pain we felt: 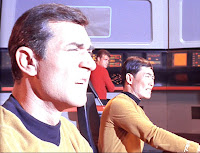 Off chairs we fell, for, truth to tell,
We have not one seat belt.

And be sure to stop in on the first Tuesday of October, when our Jane Austen Movie Club discusses BRIDE AND PREJUDICE!

And thanks to Trusty Todd for the Scotty’s Best stanza…

Cara
Cara King, who has never met a cross albatross

OMG, Cara, you are the Queen of Parody Genius!! This is priceless!! I am printing it to keep for posterity AND to send a copy to my brother who is my partner in Star Trek fandom! “We have not one seatbelt.” ROFLMAO!!! I can’t wait for the next installment. Truly, Cara, this is just too clever for words.

I am in total agreement with Louisa. Cara, you are soooooo clever!

Lois, who figured they would have been better off with seatbelts, but hey, what do I know? 😉

Cara, my dear friend, you need professional help to quench this maddness.

Please take a long, long, long time before seeking it.

Cara, you never fail to make my day!
And thanks be to Trusty Todd

That was BRILLIANT! The perfect mix of Trek in stanza. Would that there was an episode of scantily clad, poetry spouting intergalactic aliens (conventional ideals of gender are of no consequence in space). Wouldn’t that be cool?

*snerk*
not one seatbelt, indeed. that was always the cheesiest, they way everyone on the bridge threw themselves to the left, then the right, in a not-quite-coordinated way…

Wow. That is a stunning intersection of literary prowess and Trekkie geekitude.

I bow in your general direction.

I can’t stop doubling up over the keyboard as I write this. You’re incredible, my goodness, simply incredible!!!

And now with Trusty Todd getting in on the act, it’s becoming a family business. What can we expect next from you two???

Actually, I’m really looking forward to the new Austen book “Bride and Prejudice”. It’s been a long time since she’s put out anything new…

Thanks for the kind words, everyone!

Rob, what would I do without you? 😉

I must admit, biased as I am, I love this one…both “Rime of the Ancient Mariner” and “Star Trek” are so over the top to begin with, the combination is simply Meant To Be.

And I did contribute a stanza, and part of another one. But the madness is all Cara’s. I’m just an enabler. 🙂