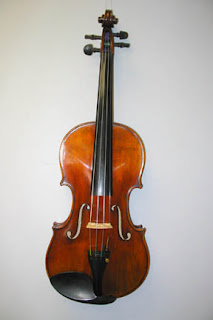 My oldest daughter has grown so much over the summer that she needs a full-size violin and now my youngest says she wants to play too, itching to get her hands on the 3/4 size hand-me-down. Over Labor Day, my oldest tried several instruments in Cleveland and fell in love with one. So yesterday I drove 50 miles to get it from Fedex (long story), took it to my daughter’s teacher. She replaced the A-string that had broken in transit and then gave the instrument a proper workout, including excerpts from the Bruch violin concerto, before giving it the thumbs up. Whew!

It’s all worth it, even listening to all the fumbling and squawking and buzzing of beginner efforts (and I’m going to go through that all again this year). Because after a time, the hideous sounds give way to music and there are few experiences to beat watching your kid play in an all-county orchestra in a real concert hall (2nd chair, 2nd violin but who’s bragging?)

There are many instances, real and fictional, of Regency ladies playing the pianoforte or harp, but I’ve never read about one who played the violin. I vaguely recall once hearing that it was considered ungraceful. In contrast, playing the pianoforte could show off good posture and provide opportunities for flirtation (the helpful beaux turning the pages, singing along, etc…) and playing the harp would be a good way to show off pretty arms.

As I checked into this further, I found a review of several studies on the emergence of professional women musicians. I’d love to read the actual studies sometime, but the review itself listed some more interesting reasons for the unwritten ban on lady violinists:

As Gillett notes, the early nineteenth century public found female violin playing “inappropriate, improper, and aesthetically jarring.” Violins were compared to the feminine body, “most fittingly performed on by a worshipful ‘master’.” Moreover, male virtuoso violinists played with great expression and body movement, which was considered inappropriate for women. Further, violins had a long literary association with sin, death, and the devil, making them dangerous for the weaker sex.

Heavy stuff! But not surprising. I’d already learned that there was a similar prohibition against ladies playing Beethoven on the pianoforte. I deliberately had the rebellious heroine of The Incorrigible Lady Catherine play a Beethoven sonata…and got one of the highest compliments ever from a CP, who thought Catherine should have smoked a cigarette afterwards! 😉 Maybe sometime I’ll write a Regency heroine who plays the violin, but only if it it’s in character and important for her to do so. 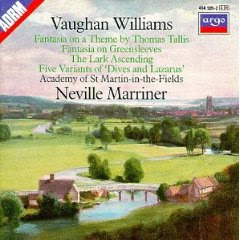 While the tension between personal creativity and cultural restrictions can make for interesting stories, but I’m glad we’ve moved beyond that. Although I haven’t had much opportunity to hear women soloists recently, some of my favorite violin recordings were performed by women.

I love this collection of music by Vaughn Williams, featuring Iona Brown (1941-2004) who not only performed on the violin but also directed the Academy of St. Martin in the Fields. If you click on the link, you can listen to excerpts including “The Lark Ascending” which I think is truly sublime. 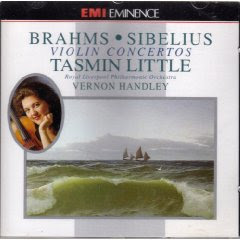 Another favorite female violinist is Tasmin Little, whom I saw play the Sibelius violin concerto while I lived in England. I had to get my hands on the recording. The Brahms is good but the Sibelius is wonderful, intense and passionate. Unfortunately this recording is now hard to find but she has made many others. If you’re not familiar with her playing, listen to the free downloads in the “Naked Violin” section of her website.

Finally I will leave you with a video that would have proper Regency folk reeling:

Why did I not even know about this series? Did it ever appear on BBC America?

Do you enjoy reading about musical heroes or heroines in Regencies? Do you have favorite violin pieces, composers, performers? Links to share?

Elena, many, many congratulations to your daughter to be playing 2nd chair, 2nd violin. Just like singing alto or second soprano in choral music is far more challenging than first soprano, playing 2nd violin is far more challenging than those show-off first violinists. And, to be in an orchestra in any spot is fabulous. What a great musical legacy for your ancestors to pass on.

I used to play the violin. Learned from when I was eight to seventeen, then kept it up through college. However, grad school and renting a room from a professor and his family paid put my

Over the years, I’ve watched many great violinists but these are the ones I’ve loved above all: Midori, Hilary Hahn, Issac Stern, Vladimir Spivakov (who plays the violin and conducts the Moscow Virtuosi, the finest orchestra in my estimation), and Joshua Bell.

I would’ve loved to have seen Yehudi Menuhin play in person, and some day, it’s my dream to see Zubin Mehta conduct live.

Oh gosh, violins and violinists, a subject dear to my heart. My dad plays violin and I used to go to sleep listening to him play the Bruch concerto and various odds and ends by Fritz Kreisler. (Tho to be honest I wasn’t that impressed by this performance.)

What an amazing show! I don’t think it’s ever been on BBC America (sorry too lazy to do the html). And blimey, that was Roger Norrington:

I like Nadia Salerno-Sonnenberg and Itzhak Perlman and the Orpheus Chamber Orchestra (just throwing that in there because they’re mostly strings).

And yes I’d like to see more musical heroines done right. One thing that you didn’t mention, Elena, is the huge amount of transcriptions of orchestral and operatic music for piano and chamber ensembles published for drawing room performance all through the 19th century.

Elena, your daughters sound fantastic! I have also heard that the violin was not considered a “lady’s” instrument in the past, though I would have thought it would be a nifty way to show off graceful hands and arms. 🙂

Congrats on 2nd chair! We just got an adult size violin for my eldest daughter. She’d already outgrown the 3/4 after only one year. We are lucky to have a friend who owns a music store and has been most generous in getting us what we’ve needed.

She was also able to participate in a local all strings camp this summer and she had a blast.

I love the fact that I am learning more about music for violins through her. I am doubly pleased that those preconceptions about female violinists are a thing of the past.

Congratulations, Elena, on having such talented and dedicated daughters. Playing the violin is a lot of hard work and takes serious concentration. As a musician I thank you for supporting your daughters’ musical aspirations. Music is a gift and a calling and I am so pleased you are allowing them to join the song.

Vaughan Williams’ music is the soundtrack to much of my writing. His music is absolute divine and absolutely British. I have been privileged to see both Menuhin and Mehta in person. You are so right about Spivakov!

I was fortunate enough to perform solos in The Execution of Stepan Razen by Dimitri Shostakovich under the baton of Maxim Shostakovich, his son, who was conductor of the New Orleans Symphony at the time.

Janet said : “One thing that you didn’t mention, Elena, is the huge amount of transcriptions of orchestral and operatic music for piano and chamber ensembles published for drawing room performance all through the 19th century.”

You are so right, Janet. There are hundreds of these transcriptions in existence and they were considered the highlight of an evening, especially in families that prided themselves on the musical abilities of their offspring.

The Bruch would be a lovely thing to fall asleep to, my friend.

Keira, Midori and Hilary Hahn are two talented ladies and would be great models for Regency ladies who challenged society by playing that sensual devilish instrument!

My daughter took piano for several years until she switched to guitar. Music is very important to her, for a while the most important thing, but to play Alternative Rock.

I shoulda got her a violin!

Keira, my daughter has played both back-row 1st or front-row 2nd violin, depending on whether it’s the school orchestra or the all-county. So she knows how to be a show-off and how to harmonize. 🙂

What an amazing show! I don’t think it’s ever been on BBC America (sorry too lazy to do the html).

As far as I can discover, it didn’t play here. I gave up on them a while back as it seemed they were emphasizing stuff like Footballers’ Wives. Not my thing.

And yes I’d like to see more musical heroines done right. One thing that you didn’t mention, Elena, is the huge amount of transcriptions of orchestral and operatic music for piano and chamber ensembles published for drawing room performance all through the 19th century.

Good point, Janet. Re musical heroines, I’ve read some who don’t seem to need to practice. I find that as believable as the ones who are brilliant swordswomen without any explanation of who taught them or practiced with them.

Ooh, Amanda, I’m green with envy! I only saw him live once and it was years ago.

Santa, isn’t it great being a music mom! If my kids had shown any inclination to soccer (not genetically likely!) I would have schlepped them around but this is so much more me.

Diane, any kind of music is cool in my book. I didn’t mention but my violinist is also starting to fiddle with a local group. She loves the orchestral stuff, too, but she ends every practice session with a little fiddling.

Thanks everyone for sharing your favorites!

Wow, congrats on that! 🙂 Well, have to admit, I know nothing about violins other than what it is, and what it sounds like. LOL It’s like going back to my answer with the composers, I love classical, but I just know what I like to listen to, not really whose it is or who is playing it, or in this case, who the violinists are. . . In related news though, I did want to learn piano, once upon a time. Never happened though. LOL 🙂

Violins were compared to the feminine body, “most fittingly performed on by a worshipful ‘master’.”

OK, I thought I had some kinky ideas, but that is just weird. I mean, have you ever tried tucking even a small woman under your chin?! My neck ached for a week afterwards!

Oh! I know this is old, but thank you so much for this! I am currently writing a violin playing heroine and it’s really good to know what kind of opposition she’ll likely face. I’m feeling scenes writing themselves right now. I knew I hadn’t seen much of violins in the seas of singers, pianists, and harpists in Regencies, but wasn’t sure why. I did figure there was some stigma, but wasn’t sure what. Thank you for clarifying!

Pamela, I’m so glad this old post was helpful! Wishing you the best with your violin-playing heroine.