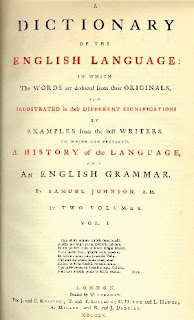 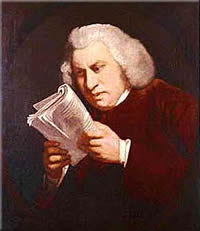 It’s the 299th birthday of the great Samuel Johnson (1709-1774) who created the first English dictionary, and although I originally intended to write something very erudite (or as erudite as I can get) I became sidetracked, so I’m going to throw out a few oddities I found when I was scrambling around online for images and information on Johnson.

First, if you happen to find yourself near Lichfield, Staffs. this weekend, you can drop by the museum that is Johnson’s birthplace. Yes, there will be cake. Lichfield is a mostly harmless city in the Midlands with a cathedral and (many years ago) a great second-hand bookstore, and some rather nice buildings. Johnson, who retained a fondness for his home town all his life, said:

I lately took my friend Boswell and showed him genuine civilised life in an English provincial town. I turned him loose at Lichfield. 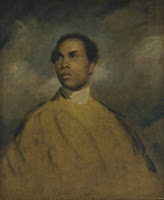 Johnson also requested that his heir, his servant
Francis Barber, settle in Lichfield, where his descendants farm nearby today. Barber, originally a slave from Jamaica, was freed by his owner in England, before entering Johnson’s service in 1752. He stayed on and off until the end of Johnson’s life, apart from brief stints as a pharmacist and as a sailor. 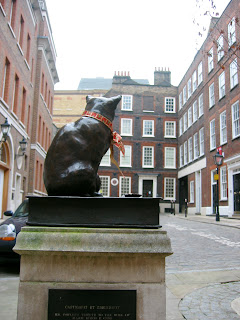 Now to the cats. Johnson liked animals, with his favorite cat in his London house being one Hodge. See, I said this was going to be diversionary. Here’s the monument to Hodge (wearing holiday garb), keeping watch over Johnson’s house and seated on a copy of the dictionary.

According to Boswell, Johnson was a bit of a sucker for Hodge:

I never shall forget the indulgence with which he treated Hodge, his cat: for whom he himself used to go out and buy oysters, lest the servants having that trouble should take a dislike to the poor creature. I am, unluckily, one of those who have an antipathy to a cat, so that I am uneasy when in the room with one; and I own, I frequently suffered a good deal from the presence of this same Hodge. I recollect him one day scrambling up Dr. Johnson’s breast, apparently with much satisfaction, while my friend smiling and half-whistling, rubbed down his back, and pulled him by the tail; and when I observed he was a fine cat, saying, “Why yes, Sir, but I have had cats whom I liked better than this;” and then as if perceiving Hodge to be out of countenance, adding, “but he is a very fine cat, a very fine cat indeed.”

As well as going out on oyster buying expeditions, Johnson also went out to buy valerian when Hodge was dying, to make his pet’s last moments more comfortable. Here’s Boswell, Johnson, and Hodge again:

This reminds me of the ludicrous account which he gave Mr. Langton, of the despicable state of a young Gentleman of good family. “Sir, when I heard of him last, he was running about town shooting cats.” And then in a sort of kindly reverie, he bethought himself of his own favourite cat, and said, “But Hodge shan’t be shot; no, no, Hodge shall not be shot.”

What I love about Boswell’s account of Johnson and Hodge is that you can visualize this scene so clearly: Boswell, grumpy and disapproving, rolling his streaming eyes as Johnson coos over his pet and adds cat hair to the fine covering of snuff he habitually wore. Despite his formidable intelligence and his strange tics and behavior (there’s a theory that he may have suffered from Tourette’s syndrome), Johnson was much beloved by his friends.

Being my own first commenter (how sad is that) although I have to say I don’t really believe this story–breeches don’t work this way–but it does sound like something Johnson would have said.

He was at a social occasion with his breeches unbuttoned and a woman approached him and said, “Sir! Your private parts are sticking out!”

To which he replied, “Madam, you flatter yourself. They are merely hanging.”

how uncanny is this, Janet. I just used a Johnson quote above my chapter-in-progress.

While grief is fresh, every attempt to divert only irritates—Samuel Johnson

And I’ll let everyone ponder on what in the world Diane is writing that!!

P.S. I may have to name my next cat Hodge, not that I have any plans to add to the menagerie at the moment.

Thank you, Janet! This was a lovely post. How can you not love a man who loves words AND cats!! Johnson’s love of his cat reminds me of my Mom’s affection for the last cat she owned. His name was Smoky and he was, of course, a gorgeous smoky gray color. He was descended from one Tigger, an orange marmalade tom cat we adopted as a kitten when we lived in England. Tigger and Mischief, our King Charles spaniel made the trip back across the pond when we came back Stateside and both lived good long lives with our family. We always had at least one kitten or grandkitten sired by Tigger until long after we kids all left home. Smoky was the last known member of the line. When he was very ill at the ripe old age of seventeen, my Mom went out and bought French vanilla ice cream for him as it was his habit to enjoy a dish on the back deck in the summer when my Welsh grandmother came down from Pennsylvania. My Mom fed him a dish of ice cream the day we had to take him to be euthanized.

I LOVE that Johnson quote, O Divine One. And I will be pondering its context!

Janet, you have added another place to my list of places to see before I “kick the bucket!”

I totally believe in the part where the cat is sitting on the dictionary. How does it go? “Cats can’t read and they don’t want you to, either.”

“No man but a blockhead ever wrote, except for money.”