This blog is dedicated to Amanda who should be frolicking in Paris at this very moment!

Today, Sept 22, marks the 216th anniversary of the first date on French Republican Calendar, or it does as long as you don’t count time the French Revolutionary way. 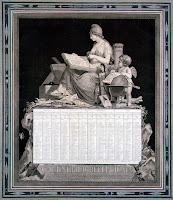 What egotists these revolutionaries must have been. They decided to count time differently than the rest of the world and what they invented seemed to be a mess. Here’s what they did.

The French Republican calendar began on Sept 22, 1792, the day of the French proclamation of the Republic. Of course, they didn’t decide this until a year later so Year I (they counted in Roman Numerals, which certainly would have become an issue when computers came along) had already gone by. The new year started with the Autumnal equinox, so it was slightly different each year.

There were twelve months, three months in each of the four seasons. The names of the months all had to do with weather and agriculture. The first month (our Sept-Oct) was called Vendémiaire or “Grape Harvest.” No confusion there. Next, around our Oct 22-23 comes Brumaire or “Fog” followed by “Frost.” I won’t exert myself to name them all, but one of the summer months Thermidore pops up today when we order Lobster Thermidore from our ritzy restaurant menu. There is some sense to dividing the months into seasons (hey, Pope Gregory figured that in the 1500s, giving us our present day calendar) and to naming them for what they are, I grant the Revolutionists that. Of course, these names made no sense to French territories around the world with completely different climates. Even so, it made dates sound very pretty, like “Dix Thermidor An II” – the day Robespierre was executed.

The Revolutionists were quite clever in changing the length of the week from 7 days to 10 days, the 10th day being the day of rest. You have to hand it to these champions of the common citizen; they figured out how to lengthen the work week by three days. Eventually the citizenry caught on that they were working more and the number of days in a week had to change back. 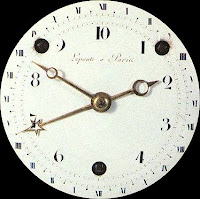 This decimal system caught on with these guys. A day lasted 10 hours, an hour 100 minutes, and a minute 100 seconds. Pretty cool if you were paying an hourly wage since the hour was nearly twice as long. This lasted only two years, though, and the only benefit has been to those lucky people who own antique clocks displaying Revolutionary time.

As you can guess, this was a confusing mess and although the Revolutionists declared that their calendar would right the wrongs of the old Gregorian calendar, it instead created an even more confusing system of leap years. In 1806 Napoleon did away with this nonsense and Gregorian time was restored. I can almost visualize him sweeping his hand and saying (in pretty French), “Enough! Back to the old way. If it ain’t broke, don’t fix it.”

You have to wonder what the English thought of the French hubris in reinventing time. One imagines a lot of shaking heads and out-loud guffaws. 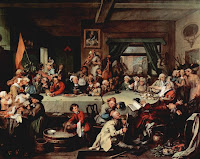 On the other hand, until 1751 England had refused to use the Gregorian calendar because it was “papist.” When they did change, there had to be an adjustment of 11 days, so Sept 2, 1752 was followed by Sept 14. Hogarth painted a picture of the citizenry rioting and shouting, “Give Us Our Eleven Days.” Of course there is no evidence that any rioting happened.

If you could change time, what would you do? I’d give myself a couple extra weeks to finish my w-i-p.

I give total credit for this information to Wikipedia

I would give myself a month of NO DAY JOB DAYS to get my WIP done! A four day work week would help too. I guess I will just have to settle for managing the time I have better!

Be on the lookout in your Walmart, Louisa. Sometimes the books are put out early (hoping your Wallyworld carries Harlequin Historical. Mine doesn’t)

Be grateful the work week isn’t ten days long with just one day of rest!

I want Hermione’s Time Turner from whichever Harry Potter book it showed up in so I can triple my writing time!

I often wish for a pause button that would make the rest of the world stop for a bit so I could catch up. And perhaps take a nap before restarting everything. 🙂

What egotists these revolutionaries must have been.
Well, yes and no. They were changing the world. And the metric system of measurement caught on, to give them credit. I’d love to own one of those clocks!

Extra time? So long as it involved extra daylight I think I’d be quite happy.

Our Wallyworld does carry the Harlequin historicals so I will definitely be on the lookout! A ten day work week? THUNK!

I want all these time devices!

Louisa, I am so glad your Wallyworld carried the HHs. Make sure my book gets sold out!! Bribe people with cupcakes!

Janet, interesting to think the Revolutionists were ahead of their time! Maybe if they’d given the workers a 5 day week, the system might have caught on.

Not to worry, O Divine One! I pimp your books out at Wally World and at the local bookstore. I should have a funky purple hat, platform shoes, gold chains and a fur collared jacket I pimp them so much. (Okay, am I telling my age with that Starsky and Hutch reference?)

I’d make Pajama Day an official day of the week. No one gets out of their PJs for the entire day. No appointments to make. No errands to run. Options: Watch old movies, Write the WIP or Read.
Have breakfast for dinner. Glorious.

Then there would be: Grab All New Releases Day. Followed by one week of Catch Up on the TBR Pile….in your PJs. See the trend?

Seems to me you are pretty darned clever as it is!! 🙂

Oh, duh, Todd.
Thank you for pointing out how Cara changed “time.” – emit, item, mite, I met…I’m afraid she is so clever that it went right over my head and now I feel like a simpleton (to use a Regency sort of word).

Naw, not clever at all…I just had nothing intelligent to say, so I played with the word.

OMG! You’re so cool, Diane. I had absolutely no idea about this. You have to hand it to the French. They always like to do things independently and the hard way. Being different is more important than useful. Risky and risque. 🙂

Keira, I had no idea about this either! I was looking at “This day in history” and came to the information from there. Was as amazed as you were!

Oh, duh, Todd.
Thank you for pointing out how Cara changed “time.” – emit, item, mite, I met…I’m afraid she is so clever that it went right over my head and now I feel like a simpleton (to use a Regency sort of word).

No simpletonicity is implied! (Is that a word?) Cara and I both have minds that work that way, which may explain our current living conditions (i.e., together).