Diane and Barbara’s Excellent Adventures, Part 3, or Scandalizing the Ton Is On The Shelves

My oldest friend…er, I should say, my friend for the longest time...came into town and we took a little road trip in Maryland.

Barbara and I knew each other in high school in Alabama. We both lived in Ft. McClellan, then an army post. I showed you photos of my house there and talked about the trip we took to our (censored) year High School Reunion in 2006. That was Excellent Adventure, Part 2

But we also had Excellent Adventure, Part 1 in October of 2005, when my last Diane Perkins book was released.

This Excellent Adventure, Part 3 took Barbara and me to Baltimore and Annapolis where it mostly rained and we mostly wandered from restaurant to restaurant. Seriously, we had Maryland steamed crabs and I’ll bet very few of you did that over the weekend. Tie in to Risky Regencies — we saw the Baltimore Basilica, America’s first cathedral, built during the Regency. In Annapolis we stayed at the Robert Johnson House, now a historic inn but during the Regency, a private home. 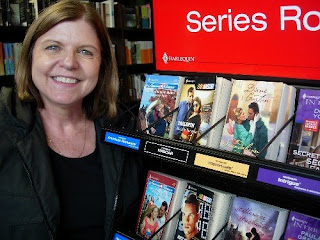 In Baltimore we stopped by the Barnes & Noble at the Inner Harbor and found Scandalizing the Ton. Here’s proof!

The highlight of our trip, however, was our first stop at Edgewood Arsenal, an army post where both Barbara and I lived twice, but never at the exact same time. In those days it was called Army Chemical Center but they changed the name when “Chemical Center” became politically incorrect-or so I suppose. 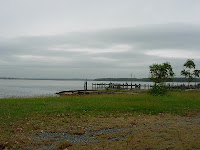 Army Chemical Center was a beautiful post on the banks of the Gunpowder River. It was a wonderful place to be a kid, with no end of things to do. We could walk to the library, the movie theatre, could ride bikes to the swimming pool and around the post along the river. We played tennis in the evenings, practically in our back yard.

I lived in an old farmhouse with bricks dating back to the 1700s (tie in to Risky Regencies…this house existed during the Regency) There’s an historic sign outside it that says Presbury Preaching House. Barbara lived in a house on the river very nearby. 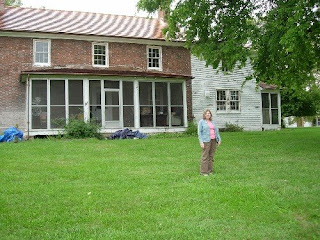 I found this online and it must refer to the family that owned my house.

Early Methodist usually built a preaching house and school on the same grounds. Private homes were also used to hold meetings. Such meetings were held at the home of James Presbury, father of Joseph Presbury. Joseph Presbury donated land for the Old Brick Church of Gunpowder Neck, December 23, 1772, where the earliest written record of a quarterly conference is still available. 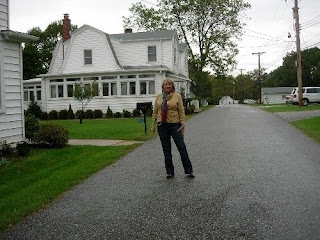 The heartbreaking part of this is that my old historic house is a shambles, the wood unpainted, the porch and the grounds full of clutter. At some point it had been turned into offices, but it was not in use now. There is scaffolding on one end so maybe there is some effort to restore it, but no one worked on it while we were there.

Even the residences in use, beautiful houses, probably build in the 1940s, like Barbara’s old house, had peeling paint in places.
The whole post was deteriorating, paint peeling, some buildings deserted, very little activity. It was very sad.

But we were ecstatic that we’d found where we’d lived.

Have you traveled back to your childhood homes? Or are you there still?

Have you had any Scandalizing the Ton sightings? The release date is Oct 1 so it should be showing up on the shelves.

I have a new contest on my website. Several chances to win books from my backlist.

And there’s still time to donate to Cystic Fibrosis for our Unleash the Story challenge.

What a lovely trip and great adventures you had Diane! Those are very beautiful places. And so much history, even personal ones to you. I think it’s great to go back to childhood places. Even if just in memory. I love all the pictures and history you shared!

My family lines always come from the Military with alot of history. I have traveled back to some childhood places. But not all of them. As moved around alot.

I have yet to see Scandalizing the Ton in stores….because I’ve yet to crawl out of my hobbit hole lately. But, I’m sure I will see it around here in our local Wal-Mart or other stores, when I do rejoin the living!

I don’t live far from my “childhood home,” so every now and then I see it. The new folks have remodeled it slightly, which is weird to see!

Diane, yours does look like a gorgeous place to be young! I particularly like the being able to walk to the library and movie theater part! (Two of my favorite places.)

Too bad the house hasn’t been kept up, though… 🙁

I wanted to wait until I went out and scoured the stores. Sightings of STT in two Barnes & Nobles. Tomorrow, I’m going to hit the Borders, so will report back, though my bookseller’d said she’d put in an order when I dropped the bookmarks off earlier this month.

I visited my childhood neighborhood nine years after we moved, and like you, I was thrilled and very disappointed. The place had become rundown and of course we couldn’t go in. Now the whole place has disappeared, I hear, and huge buildings are in place.

I would love to live in a small town where children can run around and drive their bikes everywhere, not where they have to be driven to activities and parents spend their spare time doing that. But perhaps in this day and age, that’s a pipe dream.

Mallory, you will know how living the military life was. It was a great life. I wonder if there are still army posts that can give that kind of life today.

Cara, I live near two of my childhood homes and I drive by them once in a while, too.

Keira, what do you mean “chubby?” I wish I was that weight again.

Thanks for looking for my book, everyone!!!

What a great adventure, O Divine One! My Mom still lives in the house we moved into when I was twelve. It was right after Dad retired from the Air Force. I would LOVE to go back to England and visit the home we lived in when I was 9 through 12!! It is on my list of things to do before I kick the bucket! Our old neighbors have sent us pictures of the village and very little has changed, thank goodness!

I have already harassed the book vendor at my Wal-Mart so if your book is NOT on the shelves by Wednesday, heads will roll!

Louisa, you just reminded me that there is a house I’d love to see in Japan. For the year we lived there we lived part of the time in a house in a Japanese village. I remember it as a mansion, with rooms we never used. I would love to see that house again, but I do not know if it even still exists.

Yesterday was WORD ON THE STREET in Toronto, a celebration of all things literary in a huge park with surrounding streets closed down and many, many thousands of people. I scored a copy of ‘Vanishing Vicountess’ and ‘Sinful Alliance’! and what do my wondering eyes behold but the dedicatee, mallory pickerloy on the comment thread!

M, Isn’t Mallory’s name wonderful? I wanted to use it for Marlena in The Vanishing Viscountess, but the Powers-that-be didn’t want me to use the name of a real person.

Sigh. Mallory and I know she really is the heroine of that book!

Diane, on your website bio page you have that picture of you when you were about 4 years old. I love the roly-poly cutie look of yours.

Just before my seventh birthday we moved from St. Louis, MO to White Plains, NY. We had lived in St. Louis in a townhouse development called LaClede Town, which was an experimental mixed-income housing project. I didn’t go back there again until my grandmother’s funeral, when I was twenty-three. The entire development had been shut down and was boarded up. It was very depressing.

I was also struck by how tiny the townhouses were compared to my memory of them. I guess a lot of people have had that experience. 🙂

Oh my gosh, Diane, I dropped by to say I’d just gotten my copy of Scandalizing and saw your post…I once lived in apts just south of the depot! We visited it often–a really pretty place. Growing up just outside Annapolis, MD, I spent oodles of time there–wonderful place to develop a love of history; I worked as a junior guide for Historic Annapolis in high school giving walking tours of the city, then after college as a docent at the William Paca House. Always my favorite place to visit when I go back home. Can’t wait to read the book!