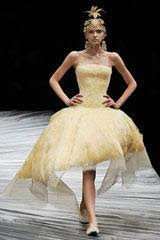 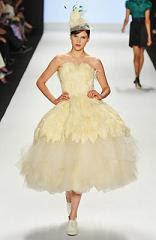 Last week, a scene from the Project Runway finale had me thinking.

The judges compared designer Kenley’s gown (left) to a recent creation by Alexander McQueen (right). Kenley complained that the judges called her a copycat. Annoying as Kenley is, I don’t think she ripped off the design. I didn’t hear the judges say so either. What I did hear is their advice to her to become more aware of what other designers are doing.

I wondered whether this advice–no doubt excellent for the fashion industry–makes sense for romance writing. Many publishers do in fact advise aspiring writers to read their line before submitting. However, I think the intent is to get more submissions that suit the current line, not avoid similar stories, which is more often my concern. I sometimes worry that I’ve accidentally hit upon a similar idea to something that is already out there, even (horrors!) something so popular and successful that my own attempt would inevitably raise suspicions.

But I stress about this less than I used to. When I heard that Victoria Alexander wrote a book with a balloonist hero, I steeled myself to read it, ready to ditch or alter my own balloonist story if it seemed too similar. As it turns out, HER HIGHNESS, MY WIFE is a fun read but the plot and characters are completely unlike mine. Even the ballooning element is different, as her aeronaut uses hot air and mine uses hydrogen. You may think this does not matter but consider the fact that in a hydrogen balloon an aeronaut can, um, stay up much longer. đź™‚ But I digress. 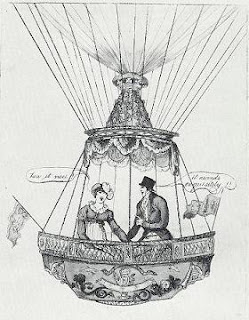 I know some authors who don’t read in their own genre because they want to avoid unconsciously absorbing others’ ideas. I won’t go so far; I enjoy historical romance too much to give up the pleasure. But I’m also not about to embark on a major survey of what sort of historical romances are currently out there, either to try to fit in or to deliberately make sure I’ve written something that is completely unlike any other story. I don’t have the time!

Although there are a lot of elements in a single garment, a novel is still a more complex creation. Two writers working in isolation could very well come up with some similar ideas, especially if they’re fascinated by the same bit of history and using the same sources. But if they are drawing from within themselves, the resulting novels are still going to as different as the two writers.

I found a cool quote by James Stephens:

Originality does not consist in saying what no one has ever said before, but in saying exactly what you think yourself.

I like that! How about you? Do you think authors should read in their own genre or not? Which do you think results in greater originality?

Elena Greene grew up reading anything she could lay her hands on, including her mother's Georgette Heyer novels. She also enjoyed writing but decided to pursue a more practical career in software engineering. Fate intervened when she was sent on a three year international assignment to England, where she was inspired to start writing romances set in the Regency. Her books have won the National Readers' Choice Award, the Desert Rose Golden Quill and the Colorado Romance Writers' Award of Excellence. Her Super Regency, LADY DEARING'S MASQUERADE, won RT Book Club's award for Best Regency Romance of 2005 and made the Kindle Top 100 list in 2011. When not writing, Elena enjoys swimming, cooking, meditation, playing the piano, volunteer work and craft projects. She lives in upstate New York with her two daughters and more yarn, wire and beads than she would like to admit.
View all posts by Elena Greene →
This entry was posted in Uncategorized and tagged creative process, originality, project runway. Bookmark the permalink.