First on this Saturday post–a little bit of Shameless Bragging! I finally got to see the cover for my January ’09 Harlequin Historical release, High Seas Stowaway (Balthazar’s story). I love it! The sense of movement, the drama and passion–it’s beautiful, and even suits the story. What do you all think???

And I also got an email with a new review for my last book, A Sinful Alliance, in the Chicago Tribune, which says “In A Sinful Alliance, her latest flawlessly crafted historical romance, Amanda McCabe expertly blends political and romantic intrigue into a captivating story.” Sigh. If only all reviews could be like that, for all of us! It would make this job easier sometimes…

And on Friday October 31, be sure and join me, along with Michelle Willingham, Nicola Cornick, and Bronwyn Scott as we launch our Blog Tour in honor of the debut of Harlequin “Historical Undone” ebooks! We’ll be at Greyhaus Literary Agency on that day, and here at Risky Regencies on November 2 (full schedule to come).

Now, when I was looking online for possible topics for today, I found out that October 25 had great significance in the lives of two men who had enormous impact on the history of this country–and the world. (Seems kind of appropriate to look at the beginnings of the USA, with the election only a little more than a week away!). On October 25, 1760, George III ascended the throne of England on the death of George II, and on October 25, 1764 John Adams married Abigail Smith.

George III was born in London at Norfolk House in 1738, the son of Frederick, Prince of Wales and Augusta of Saxe-Gotha, grandson of George II. His grandfather and father did not get along, and George II took very little interest in his grandchildren. Until the Prince of Wales unexpectedly died in 1751. Three weeks later, Prince George became Prince of Wales. In the spring of 1756, as he approached his 18th birthday, his grandfather offered him his own household at St. James’s Palace, but, guided by his mother and his advisor Lord Bute (who wanted to keep him close at home) he refused.

In 1759, he became infatuated with Lady Sarah Lennox, one of the extraordinary daughters of the Duke of Richmond, but, once again guided by Bute, he gave up thoughts of marrying her and turned to Princess Sophia Charlotte of Mecklenburg-Strelitz. He met her on their wedding day in September 1761, and they ended up with 15 (mostly troublesome) children. Two weeks after the marriage they were crowned at Westminster Abbey. (The madness and the loss of the American colonies all came later…)

John Adams met Abigail Smith when they were 17 and 26 years old, and fell in love pretty much right away, though the wedding would have to wait. Abigail’s mother, Elizabeth Quincey Smith (of the Quinceys) did not approve of the son of a mere farmer for her daughter, even though John was by then a lawyer with a new practice. But even when they were apart they wrote torrents of letters, over 1100 of which survive today to testify to this great romance and partnership. Including this one, dated October 4, 1762:

By that same Token that the Bearer hereof satt up with you last night I hereby order you to give him, as many Kisses, and as many Hours of your Company aftr 9 o’clock as he shall please to Demand and charge them to my Account: This Order, or Requisition call it which you will is in Consideration of a similar order Upon Aurelia for the like favor, and I presume I have good Right to draw upon you for the Kisses as I have given two or three Millions at least, when one has been received, and of Consequence the Account between us is immensely in favor of yours,
John Adams 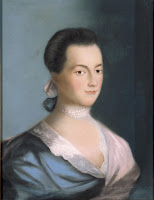 The wedding finally took place several years later, performed by her father, the Congregationalist minister Reverend William Smith. They then moved to the house in Braintree John inherited from his father and had 4 children who grew to adulthood. They were married for nearly 50 years. 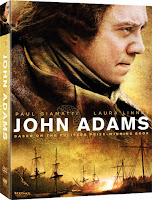 And if you haven’t seen the HBO miniseries John Adams, run out and rent it right now! It is one of the best historical dramas I’ve ever seen.

Any other milestones on this October Saturday???

I can’t think of milestones right now but you referenced two of my favorite shows/books. I first read about Abigail Adams when I was in high school and found Irving Stone’s book about her and John. Just think what could have happened if the ladies had been remembered when the Continental Congress met.

And I loved “The Aristocrats” and book about the Lennox sisters. Two dynamic women who still made a difference, even in time periods that were stifling to women in many ways.

Oh, I forgot to mention that your cover is lovely!

I agree that John Adams is a fantastic mini series. I was particularly fascinated by the political intrigue. Clearly, it has been with us since the birth of the nation! The Vice Presidency, for example, started out as a much more important position. Adams presided over the Senate and thought his job was to guide their deliberations based on his superior experience. He was so universally disliked by the senators, however, they voted to gag him. All he could do was sit and listen to the debates, not participate. To this day, that is all the V.P. is allowed to do. Imagine the possibilities for that exalted office had our first V.P. been someone else! A classic example of how personality can shape a nation.

I really want to see the miniseries as John and Abigail Adams are two of my favorite American historical figures. Their letters to each other are so wonderful and really set the birth of a new nation in context.

Fifteen children with a madman. Now that is not my idea of a good time!

Tessa, I also love “The Aristocrats”! Both the movie and the book. When I first read the book, I thought “Wow, I have to write a story set during the Irish uprising!” I finally found someone to buy that one, with a heroine as the revolutionary…

“Fifteen children with a madman. Now that is not my idea of a good time!”

LOL, Louisa! Fifteen children with anyone at all couldn’t be much fun, I think. 🙂 Another of the Lennox sisters, Emily Duchess of Leinster, had something like 22. That is beyond my imagination.

yipes. I haven’t seen the Adams miniseries, nor the Aristocrats, more evidence that I’m out of touch in so many ways…..

No milestones, but I did do a booksigning at my Curves this morning.

AT least the Emily Lennox had those 22 children with two different men! Love the cover of the book. Can’t wait to read it.

I LOVE your cover!

yes, I just came back to say (like everyone else) I LOVE YOUR COVER!!!

It is so romantic, like the best of those old historic romance covers before they turned into bodice-ripping cliches. I really do love it.

Diane! (and everyone who hasn’t seen it)–you must must must see/read “The Aristocrats”! The Lennox sisters were such great “heroine” material in so many ways, and their lives involved a tremendous number of important figures in the Georgian/Regency period (for instance, Caroline Lennox was the mother of Charles James Fox, AND had a romantic runaway marriage). Cara, we should have a Movie Club discussion soon…

And since I don’t get HBO, I watched “John Adams” almost all the way through in one sitting on DVD. It was long that way, but I was so riveted I couldn’t stop.

And thanks for the cover compliments, everyone! I like the way they BOTH appear to be ripping each other’s clothes off, LOL.

Oh, and Stella Tillyard (author of “The Aristocrats”) has another great book, “Citizen Lord,” about Edward Fitzgerald, which I’m in the middle of reading now for Irish research.

A pirate romance! I can’t wait! Congratulations on your wonderful review.

Great cover, and I too loved the HBO miniseries. If you rent them, I expect you’ll get the special about how they made the series and how much of the buildings and crowds were digital special effects. Laura Linney and Paul Gia…(sorry) are both great. Cara, can we do a movie special on it sometime?

I must admit to my shame that I still haven’t watched John Adams. But I will! He’s a very interesting historical figure–great in his own way, but very flawed as well.

One thing that I find inspiring (in these days of partisan rancor) is that John Adams and Thomas Jefferson, after being political enemies for years after the split between the Federalists and the Democratic-Republicans, managed to reconcile and become friends again when they were both retired. They both played such a significant role in founding the nation–I think it’s nice to be reminded that we have far more similarities than differences.

Well, I don’t have any milestones, but I discovered in today’s paper that here in NJ we had a Bonaparte brother living in the state back in the day —

I love pirate stories, too! They were some of the first historical romances I read, though they’ve been a bit rare lately. 🙂 In January, Romantic Times is doing an article on the appeal of pirates.

Todd, the friendship/rivalry/reconciliation of Adams and Jefferson were really well-done in the series (IMO)! Strong political feelings certainly didn’t start with this current election, LOL

Ammanda, your cover’s gorgeous. Sigh, I want Balthazar to carry meeee off, not whatzherface. Sigh.

I’m really looking forward to the short e-novella/stories series that you four are launching.

Twenty-Two!! She probably never slept all her life. Imagine always having a babe on each hip and on each teat.

Great cover, and great review, Amanda! And in the Chicago Trib, no less! Very impressive.

I’ve seen the miniseries Aristocrats, and liked it a lot (though it did have that based-on-real-life problem of not having a pretty plot), but still haven’t read the book.

And I have the John Adams miniseries out from Netflix, but haven’t had time to watch it yet!

As to discussing either one via the Jane Austen Movie Club — I’ll give both a decided Maybe. We’ve only done one non-Austen miniseries (Cranford), and the discussion was pretty sparse…

Keira wrote: Twenty-Two!! She probably never slept all her life. Imagine always having a babe on each hip and on each teat.

Well, I think duchesses have servants to take care of that whole hip thing. 🙂

And come to think of it, I would suspect she had someone to take care of the nursing thing, too, or she might have had fewer than 22 kids…

I love pirate stories, too! They were some of the first historical romances I read, though they’ve been a bit rare lately. 🙂 In January, Romantic Times is doing an article on the appeal of pirates.

My copies of Marsha Canham’s Across A Moonlit Sea and The Iron Rose are well-thumbed. I hear Beverly Jenkins has a pirate romance in the works, and I’m waiting to get my hands on Eugenia O’Neal’s Dido’s Prize.