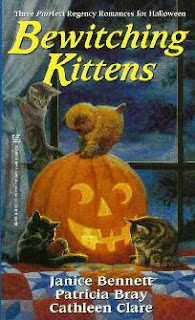 Last night we finished carving our Halloween pumpkins. I felt some doubt that this was a custom during the Regency, despite Halloween anthology covers like this one, so I thought I’d look it up.

The History Channel identifies the origin of Halloween with the Celtic rituals of Samhain and says people have been making jack o’lanterns for centuries, carving scary faces into turnips (pictured below) or potatoes and setting them in windows or near doors to frighten away evil spirits. It also says the practice is related to an Irish legend of a stingy blacksmith named Jack and the Devil (read more here). 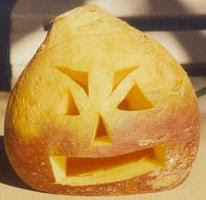 I found the same story at www.jack-o-lantern.com which also says that when the word first appeared in print, it referred to a night watchman or man carrying a lantern. Halloween History says the word was used for the phenomenon of ignis fatuus, lights appearing over bogs and marshes. For all I know, both may be true. I didn’t have time to search further!

“Throughout Britain and Ireland, there is a long tradition of carving lanterns from vegetables, particularly the turnip, mangelwurzel, or swede. But not until 1837 does jack-o’-lantern appear as a term for a carved vegetable lantern, and the carved lantern does not become associated specifically with Halloween until 1866. Significantly, both occurred not in Britain or Ireland, but in North America.”

So yeah, people probably did carve jack o’lanterns during the Regency, though they may not have called them that and probably wouldn’t have used pumpkins, which Cobbett wrote was “a thing little used in England”. I also think it was a country custom, not something the gentry or aristocracy would have done except perhaps on a whim. 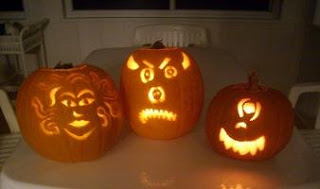 Anyway, here are our creations. My kids are still into Greek mythology, so we have Medusa, the Minotaur and the Cyclops.

Anyone else doing anything fun with pumpkins…or other vegetables? That you’re willing to share, of course. Planning costumes for themselves, children or pets?

Love the cyclops.
I have three juniors aged 11,7, and 1, so last year their dad let the big boys loose with their own designs and supervised carving results on large pumpkins, while the baby girl got a tiny pie pumpkin which he gave eyes nose and mouth using his smallest drillbit. It looked great!

I have to say, I’m a bit concerned about those kittens so close to the candle. 🙂

Love the jack o’lanterns, Elena! I don’t usually carve my own (too messy), though Halloween is my favorite holiday. The dogs have their own costumes this year–Victoria the Pug is a dragon, and Abigail the Poodle a princess (complete with pointy pink hat with a veil!)

We can’t carve here until tomorrow at the earliest because the California sun causes instant dark green spots.

My 12 year old daughter and her friends are dressing up as garden gnomes.
I’m attending Spiral Dance in SF on Saturday and on Sunday am attending a Dia de los Muertos / 50th birthday celebration. It’s a theme weekend!

M, that sounds like fun. I never thought of using a drillbit. I did use a toothpick to punch out snakes’ eyes on the Medusa, though you can’t see them in the photo.

LOL on the kitten cover, Amanda! It does look like a tragedy waiting to happen. I would love to see your dragon pug and poodle princess-will you post pics?

Jane, we’ve just had the first snow of season in upstate NY. At least the cold helps preserve the pumpkins. I love the idea of garden gnomes and it sounds like you have a great weekend planned. At the risk of sounding terribly provincial, what is Spiral Dance?

That carving is amazing, Elena! You should turn pro. 🙂

Oh, sorry! I didn’t go into detail in an attempt not to sound weird. But how weird can a bunch of middle-aged ladies at a clean and sober event be? lol Here’s a link to a video. Spiral Dance is quite fun and meaningful.

I’ve never actually carved a pumpkin, sad to say. Maybe in a year or two, when my daughter is old enough to help a bit more. Her preschool class went on a field trip to a farm last week, and she came home with a sugar pumpkin. It’s too small for a jack-o-lantern, but I found a recipe for a pumpkin tart on a chocolate crumb base that I just might be ambitious enough to try.

My only Halloween plan is to take my daughter trick-or-treating with one of her friends. She’s going as Uniqua from the Backyardigans.

Sniff, nope, no pumpkins around here. 🙁 LOL Whenever we had pumpkins around, we never carved, just painted or used magic markers. One year sis and me got specific shapes to do a Bert and Ernie duo. 🙂

Great pumpkins, Elena! No pumpkin carving for me, but the furkids have great costumes – I have a princess, a vampire and two hotdogs. My 24 pound black cat has a set of red devil ears and a red pointy tail to match his real one.

For the most part I have made Halloween cupcakes for the bakery until I am sick of looking at them. Although they did turn out really well. We have some with a green hand coming up out of a dirt covered cupcake (chocolate icing and sprinkles)with worms in and round the hands (gummy worms.) They have been a big hit as have the big bloodshot eye cupcakes.

Holidays mean a whole different thing to you, don’t they, Louisa!

Elena, your pumpkins are terrific!! We were never that good at it.

Ceramic jack o’ lantern for me. LOVE IT. No more mess.

I have carved the odd pumpkin (some of them very odd, actually), but I was never as good as you, Elena! This year I don’t think we’re going to do anything…too busy. 🙁 And we live in a gated complex, so usually no kids come by (though there are now a few living here).

When we lived in London it seemed like Halloween wasn’t a very big deal. I wasn’t sure if it was because of competition from Guy Fawkes Day (I remember all the kids in the tube asking for “a penny for the Guy”), or if it just didn’t used to be very important anywhere, and at some point it got big here in the US. Does anybody know?

Those pumkins are fabulous. We got our pumpkins two weeks ago from a farm in Albany. They didn’t last very long since it’s been rather warm here until yesterday that is. Now they are caving into themselves. Thank goodness we will be carving more on Friday.

That carving is amazing, Elena! You should turn pro. 🙂

And give up this little writing thing? ….tempting at times!

But I cannot claim full credit. The only pumpkin I carved was the Medusa. My kids did the others, with only a little help.

Jane, Spiral Dance sounds wonderful and not weird to me at all. Some of my friends from the UU church do similar things and I am always interested in learning more. Luckily we’re in a faith where it’s OK to try different paths; it’s even encouraged.

Pumpkin tart on a chocolate crumb base sounds wonderful, Susan. I didn’t used to think that pumpkin and chocolate went together until a friend brought pumpkin chocolate chip cookies. I was converted. 🙂

LOL on the Bert & Ernie, Lois. That sounds so cute!

Those cupcakes sound cool, Louisa. I’ve promised to bring some to a school party tomorrow but we’ve been directed to do a fall (Not Halloween) theme I’m going to decorate them like uncarved pumpkins. Yours sound like more fun!

Todd, according to my (somewhat sketchy, I’ll admit) research, Halloween customs were more popular in Ireland than in England. Irish immigrants brought those customs with them in the mid 19th century and after that, I suppose American holiday commercialism took over.

Great pumpkins, Elena! I think Halloween is catching on in England now–any excuse for free candy, which seems to vie in popularity with burning Catholics in effigy.