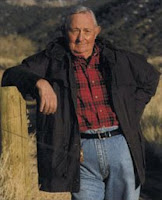 I had another post all ready to go, but then last week one of my favorite authors, Tony Hillerman, died at age 83. I had the pleasure of hearing him speak at an authors’ event in Albuquerque many years ago, and he was entertaining, articulate, inspiring, an all-around class act as well as a superlative writer.

I lived in New Mexico as a child and early-teenager, and still visit the state as often as I can. It’s a very special place, one of immense and strange beauty and a great sense of creativity and spirituality that is like nothing else I have ever seen. I was first drawn to Hillerman’s books because of this same deep affinity for the land, which he evokes so perfectly through the very different characters of Leaphorn and Chee. But I stayed for more than that–for his evocative yet unadorned writing style, for his intricate plots and vivid characters, for his beautiful descriptions of Navaho ritual and the vastness of the irresitible landscape.

According to one of the many tributes that came pouring out last week, Hillerman used Chee and Leaphorn to introduce “readers to a landscape of bold physical, intellectual, and spiritual dimensions.”

The first Hillerman I ever read was Skinwalkers, which is still my favorite. I also love Coyote Waits, Talking God, Thief of Time–all of the Leaphorn/Chee mysteries, really. He also has a memoir, Seldom Disappointed, childrens’ books, and some great non-fiction, including The Spell of New Mexico and The Mysterious West.

Jim Benciveng, in one of those tributes, defends Hillerman’s place among the timeless greats of the mystery genre. “First, Hillerman is a master of style. His sentences are lucid, yet subtle, as sunlight in the high desert where Navaho tribal detectives Joe Leaphorn and Jim Chee patrol. He creates a vivid, austere sense of place. Second, Hillerman probes the metaphysical implications of crime, religious taboo, and moral weakness in human nature. His point of view is always compassionate. He taps an innate hunger for justice and harmony. Third, Hillerman explores misunderstanding and conflict inherent in cross-cultural mores. This more than anything else sets him apart from mystery writers of his generation.”

Hillerman and his work will be greatly missed. (For an obituary, you can go here; or here for a full bibliography)

Do you read Tony Hillerman’s novels? If so, which is your favorite? And do you also feel like you’ve lost an old friend when a favorite author dies?

Be sure and visit Risky Regencies tomorrow to read about the new Harlequin Historical Undone ebook line! There will be lots of fun and chances to win free downloads of the 4 launch stories. Also, there are lots of updates at my own website, including an excerpt from High Seas Stowaway and some “behind the scenes” research info…

And in case you haven’t noticed (ha!) Election Day is Tuesday. Be sure and vote!!!

I’m sorry to hear of Mr Hillerman’s death. I read all the Leaphorn & Chee novels during one glorious summer, and the whole time I felt like I was living on the Rez and looking down over that fabulous landscape. I always marveled at the time that Leaphorn spent in the car while he was driving to and from the crime scenes 😀

It will probably come as no surprise that I haven’t read Hillerman, but it is sad that he’s passed away. It’s always nice to discover that authors whose work we like are also people we like.

LOL! I always love those scenes, they’re always great for introspection. 🙂 I’m not surprised it takes them so long to drive anywhere, either, the distances out there are immense

Hillerman’s books sound fascinating, Amanda. I only visited New Mexico once but had the same feeling you mention. I’ll have to put Hillerman onto my TBR list.

I have never read Hillerman, but based on your rec, I will certainly give him a try. Thanks for the tribute, Amanda.

I’m sad to hear about Tony Hillerman’s death. I loved his books and the world he created, altho I can’t remember my favorite. I read them all avidly a few years ago.

Skinwalkers hands down, Amanda. Hillerman had a real talent for painting and entire wilderness as a backdrop to his stories. As a Native American ( my Mom is FBI – full blooded Indian) I have always appreciated the way he depicts Native Americans – their character, courage and spirituality.

“I have never read Hillerman, but based on your rec, I will certainly give him a try.”

If I’m remembering right, “The Dark Wind” is the first in his series, and a great place to start!

Louisa, I also really love the way he depicts his Native American characters, as complex people rather than any kind of stereotype. The way he discusses the pull between the traditional ways and the modern world is fascinating. It led me to read a lot more about the Navaho and the whole history of the Southwest

Yes, Amanda, The Dark Wind, is the beginning of the series and it is a great place to start. A great story and some very profound prose about the nature of evil.

I’m sorry to say that I have never read Hillerman, so this was a great blog to read. I had him pegged as “another one of those male thriller writers.” I’m very glad to see how well he writes. Another writer to consider when I visit the bookstore next.

Ammanda, have you been to Taos, NM? Natalie Goldberg, who’s also a Zen Buddhist, finds that place fabulously meditative for her spiritual as well as writing work.

Thanks for your column, Amanda. I’ve been “out of the news loop” for the past two weeks and am just getting back in — so missed, sadly, the news of Tony’s death.

He was a fantastic writer and a terrific generous human being. I had the opportunity to talk with him several times while researching a book set on the Navajo reservation and he was always helpful, interested and willing to help out. He was as generous with his time as his knowledge.

For the record, I think Listening Woman was his first Joe Leaphorn mystery, though Jim Chee may have first appeared in the later book, The Dark Wind, which is one of my all-time favorites.

Actually, I think I’m wrong on both counts. The Blessing Way was likely his first Joe Leaphorn book, and People of Darkness, the first Jim Chee. But still The Dark Wind remains one of my favorites. They are all terrific reads, and while it’s nice to start at the beginning, you can really begin anywhere and just read them as you come to them. And, re-read them, of course!

“I had him pegged as “another one of those male thriller writers.””

LOL–no, he’s definitely not that. 🙂 Actually I once loaned a couple of the books to a friend who is a big thriller reader, and he complained they were “too slow and boring.” 🙂 They have scenes of action and danger, but mostly they are much more–contemplative. I think you’d like them, Keira.

And my parents have a condo in Taos! I got there a lot, and have ever since I was 4 and we first visited there. It’s a wonderful town, very spiritual with lots of art galleries, writers’ groups, environmental organizations, and great food. 🙂

Cool! I’m gonna get the Dark Wind soon, thanks for the specific rec.

I confess I’ve never read any Hillerman… But Amanda, I know what you mean about how when a favorite author dies, it feels a little like losing a friend…though what I mostly mourn in such cases is all the novels they won’t write…